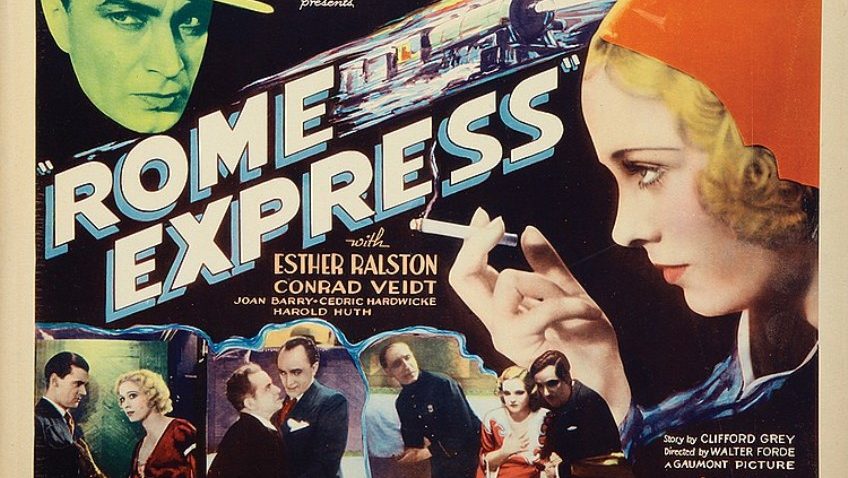 These three British films can be watched on You Tube for free.

Train thrillers have always been a popular genre. One of the very first was Rome Express, hugely popular with critics and public in 1932, and hailed as a turning point in the British film industry.

ROME EXPRESS tells a story of theft (of a Van Dyck portrait), murder and adultery. A game of poker raises the tension. The director is Walter Forde and the cast includes Conrad Veidt, Esther Ralston Hugh Williams, Donald Calthrop, Gordon Harker, Cedric Hardwicke, and Frank Vosper. The actual filming, the photography and the editing, is impressive and often witty in its juxtapositions.

There are slight changes in the story. There are some new characters and more comedy. You might enjoy watching both films and making comparisons between them.

Finlay Currie appears in both films: first as a Hollywood publicity manager to a film star and then as a mean millionaire philanthropist who treats his male secretary appallingly.

I don’t think you will be in any doubt which is the better of the two films.

NIGHT TRAIN TO MUNICH, a comedy thriller directed by Carol Reed, was extremely popular in wartime 1940 Britain because of its plucky British patriotism and its anti-Germany propaganda.

A British secret agent (Rex Harrison) rescues a Czech scientist and his daughter (Margaret Lockwood) from the Nazis. The plot is absurd and totally unbelievable. The Nazis, with the exception of Paul Henreid, are caricatures.

Harrison, a suave charmer, swans around in uniform disguised as a Nazi officer. Basil Radford and Naunton Wayne recreate the characters they played in Alfred Hitchcock’s The Lady Vanishes.

The climax in a cable car over the Alps is so cardboardy and so unconvincing as to be comic. Carol Reed would go on to direct much better films.