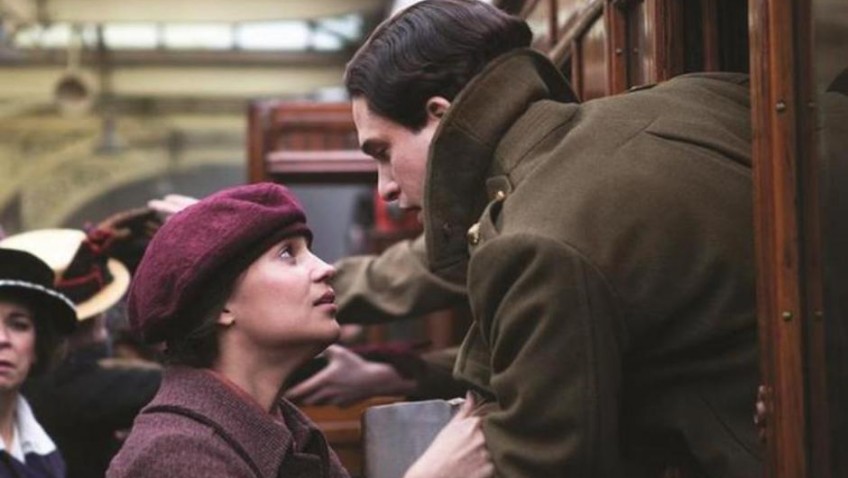 Vera Brittain says No to Killing, No to War TESTAMENT OF YOUTH (BBC) is World War 1 from a woman’s point of view. Vera Brittain lost her fiancé and her brother and her two dearest friends in the war. She gave up being an undergraduate for the duration and served as a nurse in England and France where she witnessed the horrors and which she recorded in her best-selling memoir, a paean to the futility of war.

Vera (convincingly played by Alicia Vikander) became an active pacifist and her message is loud and clear: “No to killing. No to war. No to revenge. No more.” (One crane shot of the wounded deliberately recalls a famous scene in Gone with the Wind.) This sincere and very worthy adaptation, well acted by a cast which includes Kit Harrington, would have worked even better on TV where it could have extended itself as a mini-series. PANDORA AND THE FLYING DUTCHMAN (Sony). Can the darling of the gods, the cause of death in so many others, die for the sailor who is doomed to wander the earth for eternity and redeem him? No problem; but first you have to sit through a lot of pretentious dialogue and endless voice-overs.

James Mason could have been good casting for the Dutchman; but not with this script.  Albert Lewin’s direction is too pedestrian. There is no desperate ecstasy, no sense of doom, no poetry; a bit more de Chirico might have helped. Ava Gardener has beauty but no acting ability. The film, not surprisingly, failed at the box office in 1951. THE TENTH MAN (Network) is a 1936 adaptation of a 1910 play by the highly successful novelist and playwright Somerset Maugham. An unscrupulous businessman (John Lodge), stands for parliament.

His wife (Antoinette Cellier) wants to divorce him. A spicy divorce case would be fatal to his election. Can the scoundrel stop her taking him to court with a bit of blackmail?  Nine out of ten men are either knaves or fools. Clifford Evans is the incorruptible tenth man. Brian Desmond Hurst directs. STORM IN A TEACUP (Sony). German comedy about Fascist bullying is transferred to Scotland where the Provost wants to be Prime Minister. His ambitions are scuppered when he refuses a dog licence to an elderly lady and causes uproar in the community. The funniest sequence is when hordes of dogs invade his home.

The 1937 cast is headed by the then young and inexperienced Rex Harrison and Vivien Leigh. Cecil Parker as the pompous Provost and Sara Allgood as the mongrel owner are much more accomplished comedians. It feels like an Ealing Comedy ten years before its time.

You can buy any of these DVDs at discounted prices by clicking on the images below: