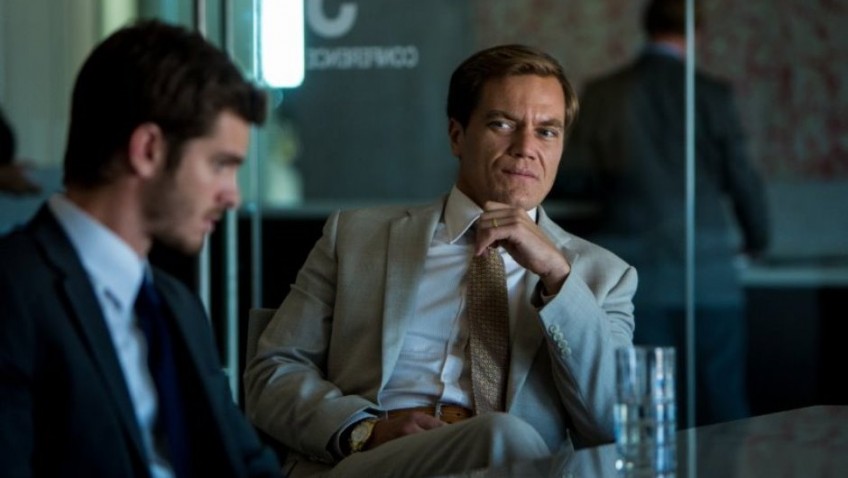 99 HOMES (StudioCanal). Homeowners who can’t pay their mortgages are evicted, their belongings piled in the street. Michael Shannon is good casting for the ruthless estate-broker who is working for the banks, repossessing and selling at a huge profit. As he says: “America doesn’t bail out losers.”

Andrew Garfield is the decent single father who is evicted (a genuinely distressing scene, this) and then works for the broker, evicting others. Garfield is so obviously a good bloke that it seems unlikely he would become as corrupt as he does. Ramin Bahrani directs this neat little film which carries a strong social message.

KISS OF THE SPIDER WOMAN (Fusion) Manuel Puig’s novel has been made into a play, a film and a musical. 30 years on the film stills works, thanks to the very theatrical performances by William Hurt and Raul Paul as a homosexual and Marxist, two prisoners, who share a prison cell in an unnamed South American country.

Hurt is particularly mannered as the gay who lives in a fantasy world of movies: the parody of a terrible French resistance movie is hilarious. Given the financial and artistic difficulties it is amazing that Hector Babenco’s film ever got made; and then it’s amazing it ever got edited to a commercial and popular length.

THE FEAR OF 13 (Dogwoof). David Sington’s riveting documentary is about a wrongly convicted murderer spending two decades on Death Row before he is released.  He was 21 when arrested. Nick Yarris, intelligent, self-taught, well-read and highly articulate is a great storyteller and gives a vivid description of the brutalities of prison life and how he came to be charged for murder  and how he fought (with many setbacks) for his freedom. I felt I was watching an actor in a play; so much so that it was not difficult to imagine Yarris getting an Oscar and casting directors putting him up for film roles.

Robert Mitchum has one of his best roles as a small-time criminal, now old and washed-up, who turns police informer in a desperate attempt to avoid going to jail. Eddie is on a losing wicket.

Richard Jordan is the baby-face cop. (“I should have known-better,” says Eddie, “than to trust a damn cop.”). Peter Boyle is the bartender who is also a hit-man. Steven Keats is the young gun-runner.

BOLSHOI BABYLON (Altitude). Huge scandal rocks ballet world. Sergei Filin, director of ballet at the Bolshoi, had acid thrown in his face which blinds him in one eye. Filin was a popular dancer but the moment he became director his popularity ceased.

Nick Read’s documentary explores the divisions between dancers and management but the film is never explicit enough. Words like jealousy, intrigue, corruption and bribery are bandied but not pursued.

The antagonism between Filin and Vladimir Urin, the dour general director, runs deep and the most dramatic and eye-opening moment comes when Filin is publicly humiliated by Urin. What is abundantly clear is that the politicians run the Bolshoi and the job of director is a poisoned chalice.