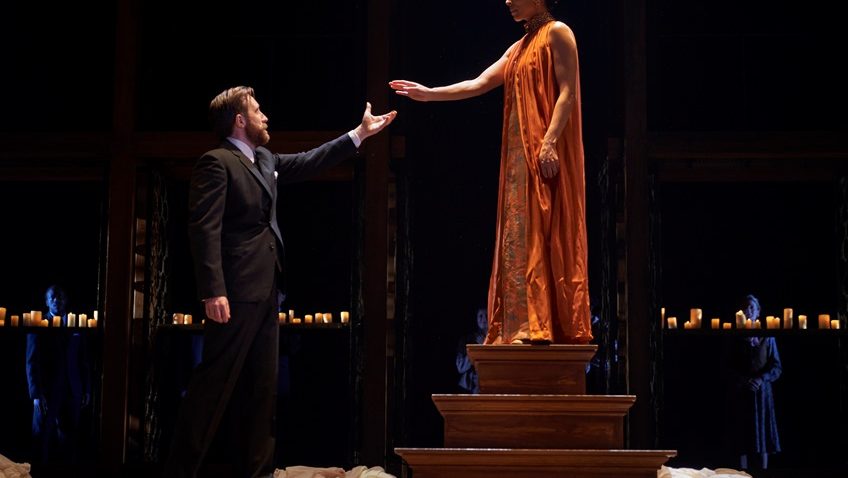 Erica Whyman’s production, set in the 1950s and 1960s, was originally intended to be staged at the Royal Shakespeare Theatre but due to the coronavirus pandemic was re-imagined for the screen and broadcast by BBC Four. You can watch it now on BBC iPlayer for free.

Leontes, King of Sicilia, believes that his pregnant wife Hermione is having an affair with his best friend and that the baby has been fathered by him. At first, I thought Joseph Kloska’s jealousy so over-the-top that he might be playing a jealous husband in a comedy by Moliere or a farce by Feydeau. But it soon becomes obvious that Leontes is mad and dangerous and needs to be locked up. He arrests his wife and wants to burn the baby.

Hermione’s trial is played out on television (in black and white since it is the 1950s.) There is a platform with stairs for her to stand on, which looks very odd and artificial and more suitable for gallows and guillotine.

Many people have thought the play should end with her death and a distraught Leontes. The country scenes in Bohemia which follow 16 years later have defeated many of the very best directors. Things get off to a bad start with the character Time being played badly by a chorus of actors.

And where’s the bear, the most famous bear in Shakespeare? I am talking about something which can pass for a bear and not the nonsense we are fobbed off with here.

The rogue Autolycus has been turned into a hippie on a vespa and played as a cabaret act. Anne Odeke speaks directly to the camera at one point and tells us gratis that Shakespeare lived through an epidemic and wrote King Lear. Well, I never!

The most original bit of casting is to have a Deaf actor, William Grint, play the gullible young shepherd. Grint speaks in sign language but there are subtitles and his stage mother speaks his lines for him. It’s fine and charming at first but the longer it goes on, and it goes on too long, it needs to be rethought and more finely tuned.

The scenes in Bohemia are so poorly staged, so poorly acted and so poorly filmed, it’s a relief to get back to Sicilia where a statue comes magically to life in one of the most memorable scenes in all Shakespeare.

Hermione looks as if she has spent the last 16 years in lockdown in a psychiatric hospital and has Alzheimer’s. She does not speak to Leontes. Kemi-Bo Jacobs does not smile. She just stares at him. Is this the man she once loved? There is no forgiveness in either words or face.

The most moving moment comes after the play is over and the cast is taking a curtain-call to an empty auditorium and no applause.

Theatregoers are longing to be able to go to the theatre again and those watching The Winter’s Tale on BBC iPlayer will be echoing Leontes’s wish: “Purge all infection from our air!”