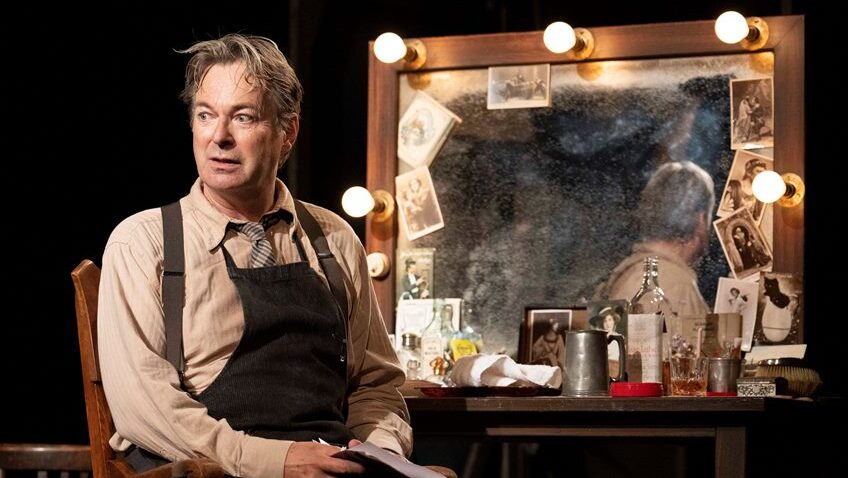 Ronald Harwood’s The Dresser, one of the best plays about life backstage, is a minor 20th century classic. It premiered in 1980 with Freddie Jones as an old pro and Tom Courtenay as his dresser.

It was then made into a film with Albert Finney as the old pro and Courtenay repeating his role of dresser. It was later seen on television with Anthony Hopkins and Ian McKellen as pro and dresser.

Of all Harwood’s plays, The Dresser is the most likely to last. Actors will always want to play the two leading roles. The present touring production, directed by Terry Johnson and starring Julian Clary and Matthew Kelly, is very enjoyable.

Clary, best known to the public for his solo stage performances, pantomime appearances and double entendres, has his biggest straight role yet and he is excellent as the devoted dresser. Kelly is totally believable as the exhausted old pro on his last legs.

The Dresser is an affectionate portrait of a famed actor-manager and concentrates on his final night when he is leading a company of “old men, cripples and Nancy boys” on a gruelling provincial tour, taking Shakespeare to the masses during World War II, whilst the bombs are still falling.

The actor is in his dressing room being coaxed by his dresser to put on his make-up and costume to play King Lear, a role he has acted 227 times. The actor, known only as Sir, is a selfish, egotistical old ham who should be in hospital.

One of the most memorable moments in the play is watching everybody backstage working their guts out to create a great noise for the storm in King Lear – only to have Sir come off stage and complain: “Where was the storm?”

Harwood always denied the play was about Donald Wolfit (1902-1968). Nobody believed him. As a young man, Harwood had been Wolfit’s dresser for four years. Wolfit, born out of his time, was the last of the great actor-managers, mocked by critics and the profession for surrounding himself with inferior actors so that he could shine all the more. He was never afraid to ham it up and upstage everybody. His greatest role was King Lear.

The Dresser will continue its tour in 2022 and visit Malvern and Oxford in January and Cambridge, Bradford and Edinburgh in February.