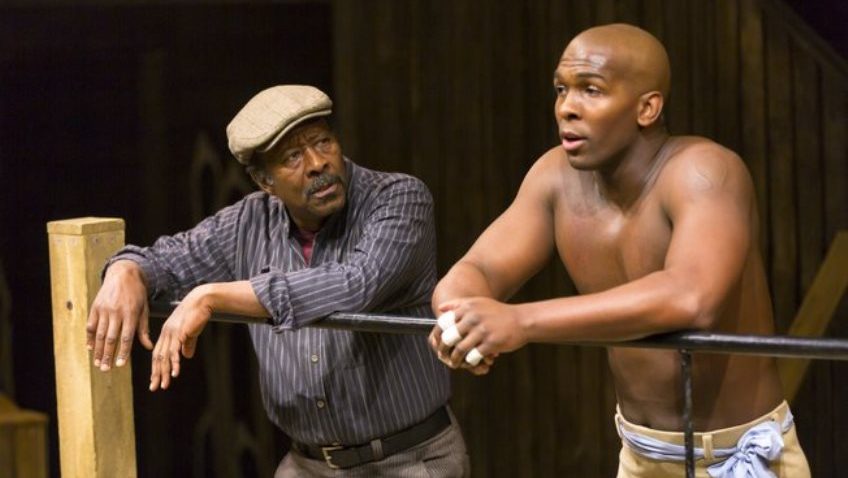 The Royale is a fictional 86-minute lead-up to “The Fight of the Century” which took place in Reno, Nevada, in 1910. The boxers were Jackson and the reigning champion James J Jeffries, who had come out of retirement.

Enforced segregation was rife in the Jim Crow era. No white champion until then had ever fought a black champion. 7,000 tickets were sold. It was broadcast to 39 States. Jeffries wanted 90% of the takings whether he won or lost.

For the African-American it was not a question of race or money. He did not want to be the black champion. He wanted to be champion, period; and if he beat the white champ, it would be official.

The question was, should he? His sister warns him that the white Americans will never recognise the fight and that whether he wins or loses, the Blacks will lose out and there will be riots and killings. Their personal lives will be in danger.

The whole action is set inside a boxing ring with the audience on four sides. The six volatile bouts are expressionistic and cleverly mimed. The actors do not actually hit each other. The actors provide the sound effects with clapping hands, stamping feet and lifting a boxing rope frame and banging it hard on the floor.

Rachel Chavkin’s production, which was seen at the Lincoln Center Theater in 2016, has a powerful jab. The cast is first-rate. Khris Davis is Jackson. John Lavelle is his white manager. Montego Glover is his sister. Clarke Peters is his trainer. McKinley Belcher III is his sparring partner.

The Lincoln Center Theater is releasing archival material, which is good news. This performance, which is being streamed for free on Broadway on Demand, was filmed live in 2016 for promotional purposes only and was never meant to be shown publicly.