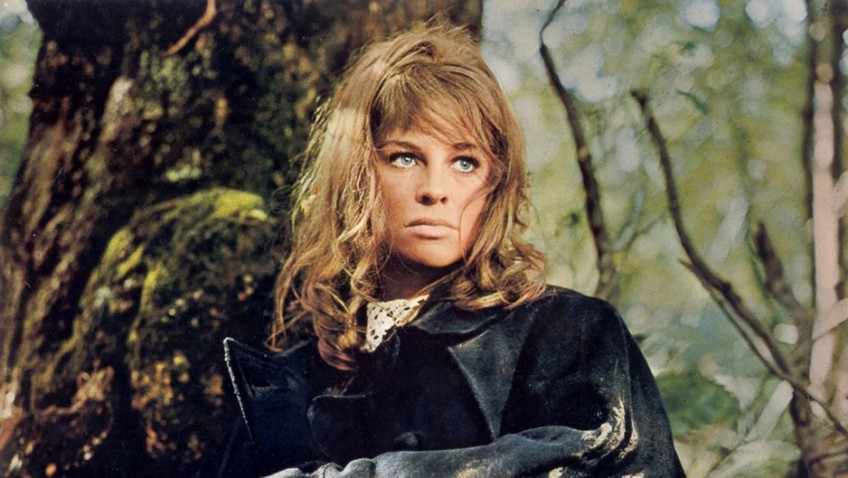 FAR FROM THE MADDING CROWD (StudioCanal). John Schlesinger’s 1967 film is a very faithful adaptation of Thomas Hardy’s classic rural melodrama set in the 1860s. There are three men – solid, reliable Gabriel Oak (Alan Bates), dashing, arrogant, promiscuous Sgt Troy (Terence Stamp) and the older, sad Boldwood (Peter Finch) – and all three are in love with the wayward Bathsheba, played by a very beautiful, very assured and very modern Julie Christie. The scene everybody remembers in the novel and in the film is when Troy seduces Bathsheba with his dazzling swordplay/foreplay.  The photography is by Nicholas Roeg. Dorset looks great. I wonder if the new film version  will be as good?

THE YELLOW BALLOON (SudioCanal). A petty thief blackmails a 12-year-old boy to help him in his crime. A bombed London site for the prologue and a disused underground station for the climax are perfect settings for this neat, modest 1953 British thriller. The unlikely scenario is so well directed by J Lee Thompson and so well photographed by Gilbert Taylor that the tension is maintained throughout. The film deserves to be better known. Lee Paterson is the softly-spoken thief and Andrew Ray is the wide-eyed frightened innocent. Kenneth More and Kathleen Ryan are his parents. Bernard Lee is so convincing as the kindly bobby on the beat that I thought he was Jack Warner.

OUT OF THE CLOUDS (StudioCanal) shows you what London Heathrow Airport used to look like in the early 1950s. Unfortunately, what goes on in it is just not interesting enough to make the film worth watching. Will Robert Beatty (grounded pilot) pass his medical check-up and fly again? Will Anthony Steel (pilot) accept a £500 bribe to smuggle a packet into the UK? Will David Knight and Margo Lorenz get romantic and do something silly – like get married? Will James Robertson Justice (pilot) fly a faulty plane? Basil Dearden has directed better films than this –  such as The Blue Lamp and Pool of London.

PAYROLL (StudioCanal). Director Sidney Hayers aims to make this 1961 British crime thriller realistic and the use of authentic locations in and around Newcastle and Gateshead certainly helps. The high spot is the actual robbery of an armoured van and the traffic jam delays on the bridge. Once the robbery is botched the script gets more and more ridiculous, moving from one unbelievable situation to yet another unbelievable situation. The last line (“Jackie, are you are all right?”) is hilariously absurd. The actors – led by Michael Craig and Billie Whitelaw – are as phoney as their dialogue. French actress Francoise Prevost hams it up.