Home / LIFESTYLE / REVIEWS > / FILM REVIEWS / Better than Charlie’s Angels, but not all that different, given the talented cast. 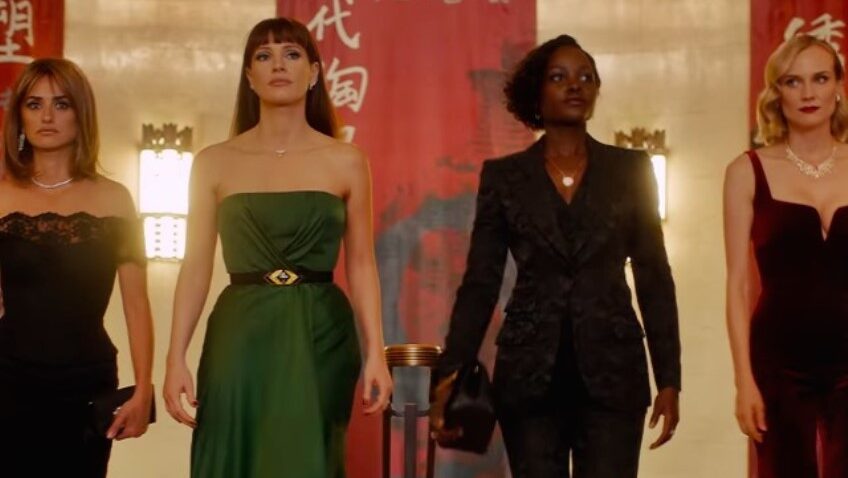 Better than Charlie’s Angels, but not all that different, given the talented cast.

Double Academy Award nominee (Zero Dark Thirty, The Help) Jessica Chastain is now a producer of films that promote diversity, so it is no surprise that the title of her new film, The 355, which Chastain produces and stars in, is based on the code name of a female agent who fought for the patriots in the American Revolution.

Director Simon Kinberg (of X-Men fame) keeps the location-hopping action rolling while co-writer Theresa Rebeck overseas the diverse (African American, Asian, Hispanic, Caucasian German and Caucasian American) female dimension, ensuring that the best lines and the screen time goes to the girls. The few men who are not bad guys have small parts and, with one exception, are killed off. It is a shame that this is not enough to make The 355 much more than a more accomplished and better acted version of the 2019 Charlie’s Angels reboot directed and starring Elizabeth Banks.

The plot is familiar: not only from Charlie’s Angels, but from several male franchises: Avengers, Mission Impossible, X-Men, and Fast & Furious. This is, after all a female-centric ensemble action movie. A device so powerful that in the wrong hands it can destroy the world, is stolen and various parties (in this case several governments and criminals) are after it. There is an arch villain (in this case Elijah Clarke played by Jason Flemyng); rogue spy masters and – what is now a given – there are rogue agents, some forced into that status, but one of whom is a villain.

There are, of course, love interests; a fancy dress occasion in which the female cast can flaunt their stuff; machine gun battles in which you are either killed or come out with a small scratch, stunts, and exotic globetrotting. What Kinberg and Rebeck hope will distinguish The 355, however, is the female bonding. It’s generic but go along for the ride and you will have a reasonably entertaining evening.

In Charlie’s Angels the Angels begin by saving and protecting Elena Houghlin, a whistle blowing engineer and programmer who is quick to appreciate her heroic saviours, learn how to use a few weapons and becomes one of the girls. In The 355 the “Elena” role is given to Penelope Cruz (Pain and Glory, Vicky, Christina Barcelona), a – wait for it – agent psychiatrist sent by Colombia’s intelligence agency, the DNI to administer to a traumatised local agent. She does not carry a gun and cares more about her husband and son in Bogota than any cause, but soon, despite protests to the contrary, she will become one of the girls here too.

When the McGuffin drive falls into mercenary hands in a double-crossed deal in a mansion outside of Bogota, CIA Langley, Virginia is on the case and despatches agent Mason “Mace” Brown to Paris. Here, she is to relieve a Colombian mercenary (Édgar Ramirez) of the priceless cyber weapon.

When Mace arrives in her Paris hotel, she finds herself sharing a room with another agent, with whom she appears to have a history. He is handsome Nick Fowler (Sebastian Stan) and since their cover is to be newlyweds honeymooning in Paris, they make love before Nick goes missing, presumed shot dead, in an operation that goes terribly wrong the following day.

Nick might be the victim of rival BND Agent Marie Schmidt (Diane Kruger, In the Fade) who, early on, has a cat fight with Mace a rival. Marie is given a backstory that marks her as neurotic and primes her for the role of rogue agent. Her father, whose career she followed, was, to Marie’s surprise, disgraced as a double (Russian) agent, and Marie suffers from trust issues. When she reports to Berlin that the device was delivered to the CIA office in Paris for safe keeping, but was stolen in a violent break-in, Marie’s BND handler is not convinced that she can be trusted any more than her father.

With Nick gone, and realising she needs a cyber whiz, Mace tracks down a former colleague from MI6. Mace persuades former agent Khadijah Adiyeme (Lupita Nyong’o, 12 Years a Slave), first seen delivering a heady lecture on cyber security to help save the world. Khadijah needs a lot of convincing, but eventually tells her live-in boyfriend she has to go out of town for work but will be home for dinner. That deadline missed; Khadijah is tragically reminded of why she gave up work for the MI6. Nyong’o’s (who sports a tell-tale scar on her face), and Cruz bring a convincing humanising dimension to their characters and these two Oscar winning actresses lend authenticity and depth to the squad.

In the second half of the film, the plot becomes farfetched as Clarke decides to plant a replica of the device in an undisclosed item to be auctioned in Taipei. The aim is to identify those with an interest in the device that, as demonstrated, can be programmed to blow up one or several enemy planes without leaving your sofa. Chinese superstar Bingbing Fan emerges in the second half of the film as the hard-as-nails, merciless power monger behind the auction, but of course, not everyone is who they seem.

One of the problems with The 355, which is clearly designed to become a franchise, is that the first half hour is devoted to the set-up, a mechanical process in which the triggering event and the main characters are established.

The sequel can dispense with this necessary drudgery and hopefully focus on giving the agents personality, camaraderie, personal lives, better dialogue and fewer machine gun battles. There is no guarantee that filmmakers of any persuasion will learn that to dress stunning, curvaceous women like these in strapless, shimmering gowns with slits to their waste is not very wise if the women are undercover agents. There are no Miss Marples here. But for for now, prolonged vehicle chases and pile ups have been left to the boys, so count your blessings.