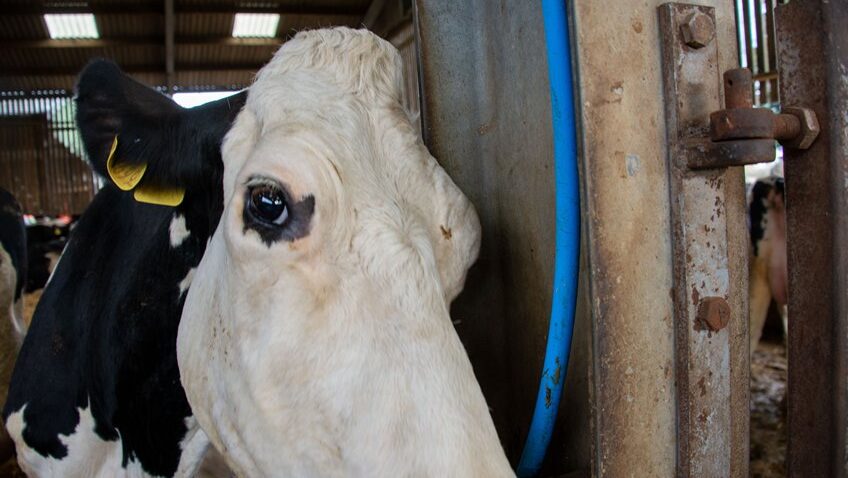 British Actress-turned-writer-director-producer Andrea Arnold, now 60, may be an unpredictable filmmaker, but all her films have strong, if financially challenged, female protagonists, and her three short films Dog, Milk, and Wasp (which won an Oscar) have an affinity with her breakthrough feature Fish Tank; her masterwork, American Honey and her new film, Cow. If trapped insects play only a symbolic role in the sprawling road movie American Honey, Cow, is the claustrophobic biopic of a British dairy cow named Luma. It would be wrong to call this documentary a horror film, given the UK’s pride in its superior animal husbandry, but it might be the most disturbing film of the year.

Luma is a cow living on a large dairy farm somewhere in the UK. We know it is a large farm not only because the mooing is deafening, but because three times a day the cows are brought to a huge rotary milking machine where the animals are arranged between metal slots in a huge circle. They are then herded into the metal bars of a feeding barn, which allow them to stand or lie down, but not to turn around or move in any other direction.

Other than a few words from the farmers, there is no dialogue and no captions. There is, however, a soundtrack over and above the mooing. While the cows are being milked loud muzak of popular songs is piped into the barn, and at Christmas they are treated to The Pogues Fairy Tale of New York.

Four years in the making, the plot is the life cycle and daily, monotonous grind of a dairy cow. Somehow Arnold turns this into a visceral, mesmerising, if at times, sickening, experience.

We first meet Luma when she is about two years old and is giving birth for the first time. Cows start to produce milk just before and for several months after they have given birth, hence the need to be continually pregnant. Cows have strong maternal instincts, but bonding interferes with the production of milk, and Luma’s job is to produce milk, not for her calf, but for sale. She is, at this one time in the year, given a private pen, and allowed to lick the birthing membrane off the calf, a tender scene that is short lived.

Short lived because Luma is immediately separated from the calf, who is trying to obtain milk from its mother. For its unique nutritional value, it is essential that the calf receives the mother’s first milk, called colostrum, but on this farm, Luma is denied the closeness of giving her offspring this first milk.

Instead, the calf is taken away and fed the colostrum out of a bottle to prevent mother and calf from becoming attached. Luma moos loudly and looks around, distressed, or so it seems. Is she calling her calf or protesting in the only way she is allowed, and the only ways she knows?

Arnold has said in an interview that she wanted ‘to show a non-human consciousness’ in a kind of experiment to determine whether an “animal consciousness” would emerge over a long period of time.

What emerges might be Luma’s consciousness, but it is hard to separate it from our own. We are relieved when it is that time of year for the barn doors to open and the cows rush out to pasture, where, as if on annual holiday, they forage all day in the open and sleep under the stars.

But Arnold’s decision to view life through Luma’s eyes means that we have no sense of time. We do not know how long Luma spends in the green pasture (in the distance is the edge of a town and railway that offers us, but not Luma, the possibility of escape). Does she remember what comes after the pasture from the previous year? Is that a look of dread in her eyes as the cows are herded back into the barn?

The viewer will give Luma a consciousness – or project his or her own feelings on her – as she delivers a calf a year: a calf she will see for 24 hours before it disappears – to be ear tagged with a mechanical staple gun, branded with a hot iron, reared with other young heifers or bulls, and shipped off to be slaughtered for beef at a tender young age or sold to dairy farms to replace worn out cows like their mother.

And who cannot but project their human feelings on the animal as her teats are inserted into a four-pronged machine three times a day, day after day, until her udder is so swollen and overworked that she cannot carry her own weight? Luma must know something is wrong as she stumbles to the scrap heap, unable to do her job anymore. The natural life span for a cow is twenty years, but for a dairy cow it’s six. There may be a kind of annual holiday for Luma, but there is no retirement.

Will the farmers, who somehow gave Arnold carte blanche to film on their property, see Luma’s consciousness, or project their own onto her daily ordeals? Will they view the film completely differently from us? It is the viewers (or their families and friends) after all who are driving down the price of a pint of milk so that farmers have no choice but to maximise Luma’s output or go out of business.