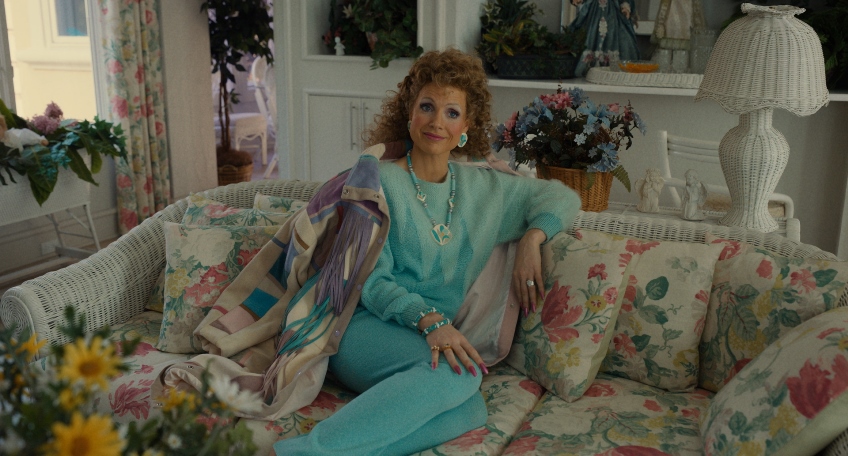 As Geoffrey Chaucer recognised in The Pardoner’s Tale, there is something irresistibly fascinating about silver-tongued conmen offering fast tracks to heaven, even if he couldn’t have foreseen parishioners picking up the phone and donating money to a new breed of corporate church in America. Michael Showalter (who directed the brilliant comedy The Big Sick) delivers a riveting movie, following the rags to riches journey of TV evangelists Jim and Tammy Bakker as their brash showmanship, marketing prowess and Tammy’s all-embracing love is repaid with furs and a kitsch lakeside mansion. If we do not get as much satisfaction watching their empire of greed unravel, it is because there are worse hypocrites in Bible land plotting their demise, in order to acquire the Bakker’s’ lucrative channel.

If The Eyes of Tammy Faye is limited by Abe Sylvia’s script (based on an excellent documentary of the same title), that strives to cover four decades of the Bakkers’ complicated, ever-evolving lives in two hours, it is bolstered by the multi-layered performances of Jessica Chastain (Zero Dark Thirty, The Help), and Andrew Garfield (Hacksaw Ridge, The Social Network, The Amazing Spider Man). They flesh out the human beings behind the headlines, in nuanced, inspired performances bringing to life the fraught, messy lives of these over-the-top television evangelists.

We first see Tammy (Chandler Head), aged ten, at the family dinner table in International Falls, Minnesota, the oldest of eight children and apparently the only offspring of Rachel (Cherry Jones) and her first husband, from whom she was bitterly divorced. She prohibits Tammy from going to a church that shuns her, and, all fire and brimstone, orders Tammy to “stop performing,” warning that she “will squirm in hell if she doesn’t sit still.” One day, after applying a touch of lipstick, Tammy goes into the church and puts on such a performance that the preacher and congregation are persuaded she has been touched by God. She feels the love and doesn’t look back.

Cut to North Central Bible College in Minneapolis, 1960, where Tammy (Chastain) the only co-ed wearing make-up, giggles in an auditorium where handsome young Jim Bakker is already a Pat Robertson in the making. But Tammy senses a kindred spirit in this unorthodox preacher who tells the staid audience, ‘God does not want us to be poor.’ And Jim notices her. They mock an uptight teacher by reciting the Song of Solomon across the room as if it were an excerpt from Lady Chatterley’s Lover.

Out in the quad, Jim confesses that before God found him, he wanted to be a radio D.J. as he loves Buddy Holly, Little Richard and Fats Domino. Tammy beams, bursting into a sexy rendition of I Found my Thrill on Blueberry Hill, and inviting a wary Jim to join her in a slow dance. As usual with Jim, there is a darker confession underneath, concerning a car accident and we’re not sure Tammy is getting the whole story. This foreshadows accusations of homosexuality and an actual affair – or a sexual assault – that Jim would have kept secret from Tammy had his evangelical rivals not used it to destroy the Bakkers and take over their empire.

Giving in to their sexual attraction for one another, the students marry and are thrown out of Bible College. Tammy presents her new husband to her disapproving mother, who gradually becomes more caring, if never approving, as Tammy makes something of herself. But it is during this brief visit that Tammy starts talking to Jim in the baby voice he would come to hate, using, like a ventriloquist’s dummy, a home-made puppet she calls Susie Moppet. She envisages using the puppets to win over the children, in order to get to their parents. Throughout their joint careers, it is Tammy who is innovating, entertaining and connecting with the public while Jim is getting over his head in real-estate deals – and debt. When ardent Christian Roe Messner (Sam Jaeger) declines Jim’s invitation to invest in his Heritage Theme Park, a Disneyland-type complex, it is Tammy who emerges, stoned from prescription pills, and still in her bathrobe, to convince Messner that it’s God’s will.

By 1964 the couple have caught the attention of evangelical media mogul Pat Robertson (Gabriel Olds) based in Virginia. It is not long before Jim is the host of Robertson’s nightly variety show, The 700 Club, on the Christian Broadcasting Network (CBN). In 1970 Tammy has a baby girl and resents staying home. There is a brilliant scene when the Bakkers are invited to a poolside barbeque at Robertson’s luxurious mansion, and Tammy marvels at Mrs Robertson, draped in furs despite the heat. ‘Jim, we paid for all this,’ Tammy exclaims, as they both become aware that this kingdom of heaven is theirs for the taking.

Tammy, who is carrying around the couple’s adorable baby daughter, notices that everyone has sat down for lunch, and spots an empty seat at the wives’ table. She drags her chair over to the all-male table, where Jim, Robertson and Jerry Falwell (a brilliant Vincent D’Onofrio) a Southern Baptist preacher and the founder of the Moral Majority, are discussing Falwell’s fight against the feminist, liberal and homosexual agenda. Handing Jim the baby, and addressing Falwell by his first name, Tammy pipes up cheerfully: ‘I don’t think of them as homosexuals; I think of them as other people. They are made from the same dirt as everyone else.’ Jim squirms.

We observe that Jim relies on Tammy’s support, but without him, she could have given Oprah Winfrey a run for her money. Tammy is revolutionising not only Christian programming, when she discusses everything from erectile disfunction to the taboo subject of Aids. The conservative public respond with donations.

After speaking up at the Robertson party, Tammy convinces Jim they can set up their own Satellite Network. It is called PTL or Praise the Lord. Tammy’s trademark make up gets heavier as does the jewellery. Even Rachel – shocked at the couple’s lavish lifestyle – is persuaded to take a fur coat. But despite the birth of a baby boy, the marriage falls apart. Sitting at his desk late one night, Jim moans, ‘sometimes I think God wants too much from me’ (by 1979 the PTL ministry is being investigated for misusing funds raised on air). Tammy asks, ‘We are not doing any wrong, are we?’

While Tammy introduces topical subjects into their show, we never hear them discuss Falwell’s far-right movement, or the feminist and civil rights movement sweeping the country. Why does Tammy have no friends? Despite scenes in which Tammy is mocked for her make-up (kudos to the large hair and make-up crew who age Chastain from 18 to 50), we are left to wonder whether, like Susie Moppet, it is a mask that enables her to perform day after day. But if so, who is she underneath?

As Che Guevara sings to Evita Perón in the musical Evita, “When the money keeps rolling in you don’t ask why.” The unexplored question we all have by the end of the film is, “how could she not know?”