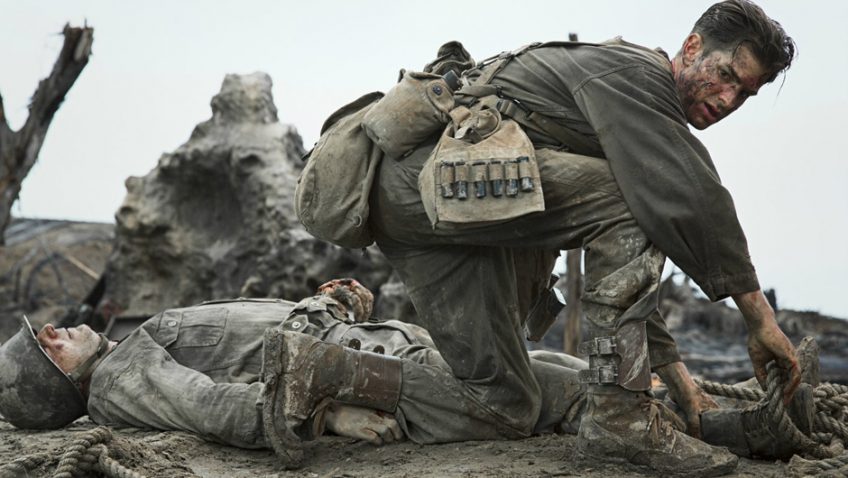 Just when you thought you’ve had it with a flood of biographies turned into films that don’t live up to expectations, along comes 60-year-old Mel Gibson, with a great one, based on the life of a World War II hero who refused to pick up a gun.  With its finely-tuned (perhaps to a fault) mix of romance and gore, despair and triumph, and doubters-turned believers, Hacksaw Ridge

is surely one of the best war films of this century. What it lacks in subtlety, it makes up for in delivering an immersive, singular, war time experience from training camp to the killing fields of Okinawa.

, which sounds like the violent film it becomes in the final, incredible hour, is also Gibson’s first film as director since the terrifically tense, gory, epic adventure Apocalypto a decade ago. Gibson, once the most successful actor in America, became a pariah around that time for reported incidents of anti-Semitic tirades, drunk driving and domestic abuse.  Now he sports an off-putting beard, deep wrinkles and, along with Des Doss in Hacksaw Ridge

, a desire to be accepted

Along with a Best Director and Best Film nomination for Gibson, Andrew Garfield has been nominated for an Academy Award for his portrayal of Desmond Doss and he appears in just about every frame. The American-British actor plays a pretty convincing Seventh-day Adventist from Lynchburg, Virginia raised by an abusive father, Tom (Hugo Weaving) and loving, long-suffering mother, Bertha (Rachel Griffiths). In the first part of this three-part movie, we see Desmond being marked by a childhood episode in which he nearly kills his younger brother, Hal (Nathaniel Buzolic), with a brick. Desmond’s own sense of wrong is reinforced by Bertha who reminds him of the commandment, ‘Thou Shalt Not Kill.’

Tom reacts differently, lashing young Desmond with his belt. A bitter, unkempt WWI veteran, Tom visits the graves of his friends more in anger than in sorrow that he alone returned decorated with medals. When WWII breaks out, Tom disowns Hal for enlisting.  Then, when Desmond saves a man’s life following a car accident, his life changes. Desmond feels empowered by using a belt, not to inflict physical harm, but, as a tourniquet around the man’s leg.

Accompanying the victim to the hospital, he sees a pretty nurse, Dorothy Schutte (a delightful Teresa Palmer) and, tongue-tied, says he wants to be a doctor. Dorothy’s reaction to this lanky, dopey, and socially awkward young man, with his eyes fixated on her, is not encouraging.

Nonetheless, in a series of charming, if slightly corny, scenes Desmond’s humour, idealism and determination eventually win her over.

As Desmond studies the medical books Dorothy gives him, he begins to feel guilty about being the last able-bodied young man left in town. He tells Tom that he intends to serve as a combat medic so that he will not fight. The second part of the film chronicles Desmond’s realisation that being a conscientious objector in Fort Jackson, South Carolina, is almost as punishing as war itself.

Barracks life is vividly depicted, beginning with a humorous inspection scene, the only time in the film that Vince Vaughn can show off his comic side as Desmond’s Commanding Officer, Sergeant Howell. Desmond excels in the physical combat drills but is bullied by his fellow soldiers when he announces, at the unit’s first shooting practice, that he will not be carrying a gun. Sergeant Howell mistakes his moral stance for cowardice and the men resent him. They do not believe that he can pull his weight without a gun. Howell concocts a plan to force Desmond, depicted in a kind of Passion of Desmond Doss sequence. They are impressed, however, when Desmond turns the other cheek and refuses to complain or name names.

Captain Glover (Sam Worthington), Howell’s commander, tries to get Desmond discharged on psychiatric grounds.  In a sharply written scene that fails, he is arrested for insubordination and court marshalled. Trapped in a cell, Desmond misses his wedding, but is saved by an unlikely intervention. Suffice it to say that, since WWI, a soldier’s right to refuse to carry arms is protected by the Constitution. In the third part of the film, the soldiers, assigned to the 77th infantry Division in the Battle of Okinawa, finally go to battle to relieve the decimated 96th Division. Desmond and his unit must climb the vertical face of the Maeda Escarpment (that resembles a hacksaw) and, once on top, blinded by bombs, fire and grenades, try to make their way across the plateau. Their goal is the heavily guarded underground bunker from which hordes of faceless Japanese pour forth.

While this part of the film focuses on Desmond’s acts of bravery, script writers Andrew Knight and Robert Schenkkan give each of the soldiers in Desmond’s unit a unique personality and we follow them from the barracks to the ridge. After the first day of battle, Desmond spends the night in a ditch with Smitty Riker (Luke Bracey), the handsome and competitive solider who earlier leads an attack on Desmond, calling him a coward. That night Smitty apologises having seen Desmond in action. Equally satisfying is a late scene in which Desmond saves Captain Glover’s life by batting away a grenade with his bare hands. Maybe Glover was right and Desmond is crazy after all, but now, he is not complaining.

What is arguably the climax of the film comes early in an unforgettable scene, similar to one in Scorsese’s Silence (also starring Garfield) but far more powerful. Retreating against a brutal attack, the soldiers scamper down the cliff while Desmond remains behind with a dying man. At nightfall, Desmond is about to descend, when he turns his filthy, blood-stained face to look directly into the camera. He barks to his invisible God, ‘What is it you want of me? I can’t hear you!’ There is silence, and then, across the smoke and fires of the hell behind him, he hears a faint cry for help. All he says is ‘OK’. This is the start of a three-day period of dodging the Japanese patrols to send the wounded, presumed dead, flying down the cliff on ropes. At first, not realising that Desmond is missing, no one in the camp below knows where the wounded men, sustained by shots of morphine, are coming from. At one point, two dying Japanese soldiers are hurdled down the cliff along with a total count of 75 men.

While Gibson shows us the horrors of war in the graphic style he introduced in The Passion of the Christ, it is not entirely new. The message that patriotism and heroism come in many guises, is convincing supported. What is missing from a film about a pacifist in battle is something more probing and, perhaps, more profound.

Doss, who died in 2006, would have shrugged his shoulders at this Hollywood version of his life and heroics. For Doss, ‘the real heroes are buried over there.’