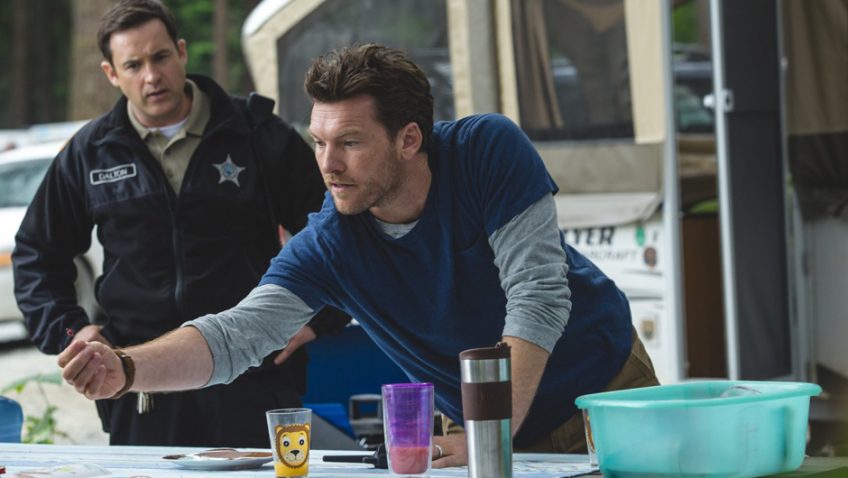 An overbearing faith film struggles to answer the toughest question

William P Young, the author of a self-published best seller entitled The Shack has told us that the title is a metaphor for ‘the house you build out of your own pain.’ In Stewart Hazeldine’s (Exam) film adaptation, based on a script by three other writers, there is no subtlety about this metaphor or anything else. The message that God cares is worthy enough, but the central question of how a caring god allows little children to suffer horrific crimes, is never really answered. Instead, it serves as a conduit to a contrived and melodramatic fable replete with insufferable preaching. Handsome, all-American Mackenzie (“Mack”) Phillips (Sam Worthington) has it all: a good job, a lovely home, a beautiful wife (Radha Mitchell) and three perfect children: Josh (Gage Munroe), Kate (Megan Charpentier) and sweet, bright little Missy (Amelie Eve). In the book Mack is a good Catholic with five children but, as it happens, Mack has his hands full on a camping trip with three.

Just to leave no cliché unturned, however, Mack’s life has not always been perfect. Mack’s mother and Mack suffered physical and mental abuse from Mack’s alcoholic father. Those scars are compounded guilt as Mack tried to poison his father and may have succeeded. Mack is determined to be a better father to his own children.

When Missy is abducted on a camping weekend the question of why bad things happen to good people becomes complicated by this potential act of patricide, whether or not it was justified as self-defense. Now Mack’s guilt is a father’s, not a son’s. He blames himself because he momentarily left Missy alone in the tent while he ran to save Josh from drowning when he fell out of a canoe. How’s that for a conundrum?

The police attribute Missy’s abduction and murder to a serial killer after finding blood and part of Missy’s dress in a derelict cabin in a magnificent mountainous wood near the campsite.

Mack is reduced to a basket case, raising the question: how can Mack help heal his family’s guilt and grief when he himself is falling apart? The answer comes in the form of a mysterious message.

One snowy day, Mack receives a typewritten but unstamped note in his mailbox that is signed Papa. Only the family and close friends would know that Missy referred to God as Papa, and there are no tracks in the snow to the mailbox. The message is an invitation to a meeting at the derelict cabin, and Mack, hoping to face the killer there, takes up the challenge, with a loaded gun. When he arrives at the inhospitable location, Mack finds himself alone with suicidal thoughts. Sam Worthington and Avraham Aviv Alush in The Shack

Just in the nick of time Mack receives a visit from looks like a rainbow coalition from the Salvation Army. This is not just any Salvation Army however: this is the real thing. Papa is the ‘black mama’ who cooks up mouth-watering meals (Olivia Spencer); Male Papa is a tough-loving American Indian (Graham Greene); Jesus (Israeli actor Aviv Alush) is a handsome, gentle, hip young man representing the Middle-East while a Mary Magdalene-type is a Sarayu, portrayed in a particularly unconvincing fashion) by the Japanese singer/model/actress Sumire Matsubara.

These gentle folk invite Mack to their picturesque, comfortable home down a little path that is bathed in summer sunshine and flowers. Mack is speechless as the snow and darkness disappears. Here Declan Quinn’s cinematography helps create a dreamscape in which the rainbow coalition tackles the restoration of Mack’s faith in a methodical manner. This spiritual therapy becomes uncomfortably overbearing, however, not to mention repetitive as Mack has to learn not to blame himself or God, but to look at the tragedy from a higher perspective.

If you get accept the tears and fanatically cloying mentors, you might have a tougher time with the sermonising that fills the entire second half of the film. The score is comprised of appropriate country-western and religious tunes with titles like When I Pray for You, Amazing Grace, Honest to God and Heaven Knows.