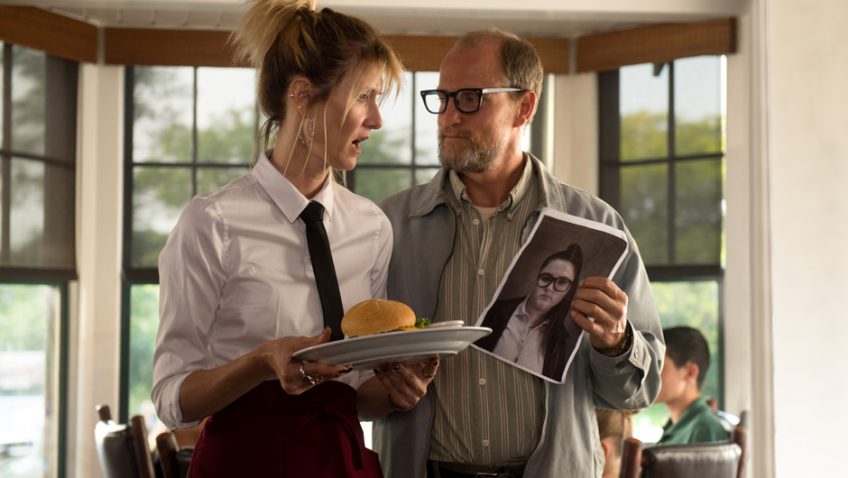 Despite two fine performances, this comedy of middle-aged manners is inconsequential

Woody Harrelson has been nominated for two Academy Awards (The People vs. Larry Flynt and the Messenger) and, at 55, can now embark on star vehicles. Like many actors of a certain age before him, notably Al Pacino with Manglehorn and Richard Gere with The Benefactor, and Mel Gibson with Blood Father, Woody Harrelson has opted for a low-budget star vehicle to reboot his career now that his highest profile role – as Haymitch Abernathy in the Hunger Games franchise – is behind him. Director Craig Johnson dealt with arrested development in the admirable The Skeleton Twins and has another go in Wilson. Harrelson makes us laugh for a while and Laura Dern is wonderful as Wilson’s unsuitable ex-partner, but Daniel Clowes’ (Ghost World) unconvincing script (based on his graphic novel) is so self-conscious and quirkily eager to please that it lacks any meaning or substance. Wilson is a middle-aged misanthrope who rebels against the digital age, but lacks any tact or social nous. He thinks nothing of asking a suburbanite, ‘Why the hell do people move to the suburbs? It’s like a living death.’ And he is not interested in the answer. When his only friend announces a surprise, Wilson grimaces, ‘you’re not having another kid?’ as though it were an amputation. Like Jim Carrey’s character in Liar Liar, Wilson says exactly what the thinks without any regard for how his utterances will come across to the listener. Grabbing the head-phones off a stranger in a train and criticising his unhip corporate job (which the man seems to like), might have been funny ten years ago, but now has the opposite effect.

It is a credit to Harrelson that for half the film, this kind of humour makes us laugh, probably because we are anticipating some demonstration of Wilson’s intrinsic worth. The problem is Wilson isn’t a modern day Diogenes in search of a genuine person. He comes across as a narcissistic, boring, creep and this does not seem altogether intentional.

As it happens, Wilson’s friend is moving on, as is his estranged father who dies before the two reconcile. When Wilson’s approach to meeting a woman (ramming their car in a car park to exchange phone numbers and insurance details) backfires, his cute little dog cannot fill the void. While Wilson has no patience with modern technology, it helps him locate his ex-partner, Pippi (Laura Dern), an alcoholic and prostitute, who left him 17 year ago. She has now gotten her life together, has changed her name, and earns a living as a waitress. Somehow, after 17 years which have not been particularly kind to Wilson, Pippi cannot resist his dubious charm and the two rekindle their dysfunctional relationship. When Pippi let’s slip that she and Wilson have a daughter whom she gave up for adoption, Wilson convinces Pippi that they owe it to the girl to find her.

The daughter, Claire (Isabella Amara), turns out to be an overweight loner (like her father) who dresses like an anarcho-punk and, despite her wealthy, solid adoptive parents, swears like a sailor. She is bullied at school and secretly cries, because any semblance of superiority is a front for her low self-esteem. It’s a bit too simplistic and obvious that Claire displays the signs of a teenager who was given away for adoption and that Wilson can connect with her like no one else.

The world of Wilson is so lazily drawn that there is no real context for anything in his life. Wilson lives in a dump, but how does he pay his rent or feed his dog? He even has a dog sitter (Judy Greer) who appears to have endless patience. After 17 years Wilson finds Pippi and Claire instantly, and both go along with him – for a while.

When Wilson is sentenced to prison for kidnapping Claire, he is beaten up a couple of times, but the dark side of his life is never allowed to bring down the carefree, inconsequential tone of the film. He becomes friends with a neo-Nazi, meditates with a black dude and slaps everyone on the back as though prison is full of old chums.

If, thankfully, Pippi knows what’s best for her, the filmmakers seem to believe that Wilson is nonetheless a good catch for another lonely woman approaching middle age. The sentimental ending gives us a reformed curmudgeon melting before a baby and living in domestic bliss as a kept man with a woman some 15 years his junior. Men won’t recognise any of it, while women will balk at the sexism behind this cop- out ending.