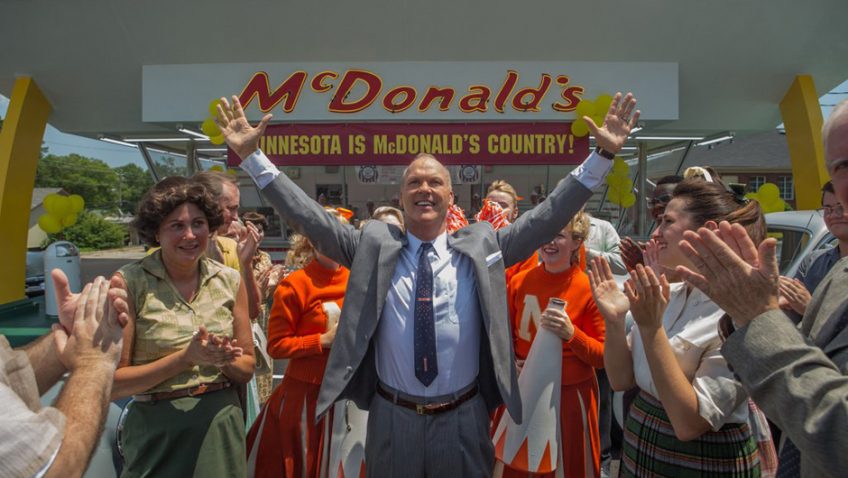 An ambiguous take on the deceitful founder of McDonald’s

John Lee Hancock is the director of the wildly successful The Blind Side (which he also wrote) and, more recently, the double Walt Disney/ Pamela Travers biopic Saving Mr. Banks. Tampering with Mary Poppins is one thing: tampering with the formula for McDonald’s is something else.  But that is just what happens in Hancock’s The Founder, a film about alternative truth, how to succeed in business and the various interpretations of the word ‘founder’.

Middle-aged salesman Ray Kroc (a facially expressive Michael Keaton) is on the road not only to sell his multi-spindle milkshake mixers, but to escape a loving, loyal wife, Ethel (Laura Dern) who must remind him what a cad he is; and an office bookkeeper, June Martino (Kate Kneeland), who reminds him of the company’s mounting debt.   As Ray orders sub-standard food from one of the many drive-ins that have sprung up in America in the early 1950s, with the increase in car ownership, he is not surprised there is no need for his machines. The food is mediocre, the service (by forgetful, distracted roller skating waitresses) is frustratingly poor and the cost of providing the disposable cutlery and plates is eating into the low turnover.  Jukeboxes and run down premises attract loitering teens and put off the far more lucrative family market.

In a grungy hotel room Ray imbibes a recording of The Power of the Positive, a fictitious self-help mantra that stands in for Norman Vincent Peale’s 1952 classic The Power of Positive Thinking that my mother read, and that is still in print. Touching base with June one day, Ray learns that a drive-in in San Bernardino, California has ordered eight mixers.  He phones the operation to find out if they made an error.  When he learns that the owners not only want the eight, but want them quickly, Ray drives from Missouri to San Bernardino. He joins the happy families queuing at the busy window of a kitchen that had been scientifically calculated for efficiency in terms of staff movement and preparation time.

Ray is dumbfounded. No one is bothered, least of all Ray, by the absence of pimply waiters. Here, you get out of your car and order directly from friendly, professional staff at the pristine window who deliver the food almost instantly. When Ray gingerly asks for the plates and cutlery, he is told that everything he needs is in the bag. The delicious (made with real milk) milkshake is in a disposable container.  Used to eating in his car, Ray sits outside at benches and tables next to a child sinking her teeth into the strictly controlled recipe of burger and a bit of onion and salt on the grill, and two pickles and two squirts of ketchup and mustard on the bun.

Ray introduces himself to the friendly, down-to-earth founders of McDonald’s, Maurice ‘Mac’ McDonald (John Carroll Lynch) and Richard ‘Dickie’ McDonald (Nick Offerman) who are happy to show off the secrets of their success (high quality, consistent food, streamlined menu, fast service).  The restaurant is a one-off as they inform Ray; they had a bad experience with franchising. After a friendly dinner, Ray persuades the brothers to entrust him with the franchising of their great concept.

They sign a basic contract that stipulates that the McDonald brothers must approve any and all changes. The McDonalds insist on the terms of the contract, but at heart, they are milk-shake and hand-shake guys, as we see later on in the film.

Ray has a steep learning curve. He learns the hard way that he should not be in the food business, but in the real-estate business.  Once Ray begins to purchase the land on which the now golden-arched franchises are located, the money comes pouring in – and with it the power to change the milkshake formula from real milk to powdered.  The impervious salesman, repeating the word ‘persistence,’ takes the bull by the horns until he turns into the bull, battering his way through all resistance, including that of the sympathetically portrayed, stressed-out McDonald Brothers.

Robert D Siegel (who wrote Darren Aronofsky’s excellent The Wrestler) and Hancock mythologize rather than satirize Ray’s rise to power.  Ray stops before the McDonald’s logo and the golden arches with a kind of religious awe and cinematographer John Schwartzman (Saving Mr. Banks, Jurassic World) turns it into a cross between a Disney and a mystical experience.  But so blatant is the commercial blasphemy that there is also an ambiguous, self-conscious irony to these shots.  Ray Kroc  really does view these as new commercial icons to which the families of America will come to worship, but does Hancock share his vision?

Nor does Hancock satirize Ray’s Trumpian rise to power, despite the fact that he breaks up two marriages by trading in his wife for the wife (Linda Cardellini) of a helpful investor (Patrick Wilson) and that he deceives the McDonald brothers. (You can just hear Trump’s ‘so sue me’ when the brothers realises they will never see their royalties).  Ray isn’t even larger than life as was Leonardo DiCaprio in The Wolf of Wall Street.  Given that this tale of how to succeed in business is being released in 2017 and not in the 1960s, Hancock would, you would think, be aware of the modern audience’s hindsight and sensitivities.  Yet there is no hint of the environmental impact of thousands of throw-away cups and bags, of the increasing fat content of the food and McDonald’s recent decision to start importing meat from South America.

There is, however, a certain irony in the fact that Hancock also projected an ambiguous angle over the darker side of a more legitimate founder, Walt Disney, in Saving Mr Banks. The legacies of Walt Disney and Ray Kroc have more in common than John Lee Hancock.  For many years the two so-called family-friendly corporations enjoyed a contract linking the fast-food giant’s junk food with the movie giant’s saccharine movies.  In a kind of posthumous quid pro quo, Disney has not renewed their contract, conscious that their audiences are bursting out of the seats.