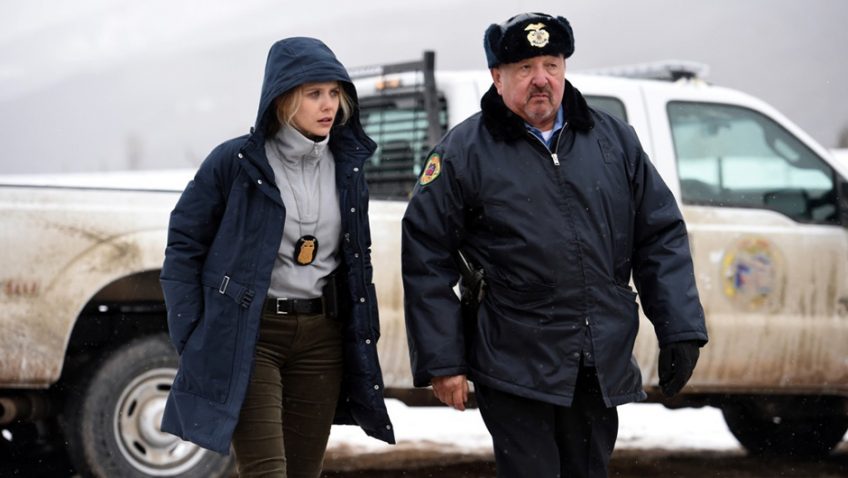 On the basis of his two brilliant scripts, Sicario and Hell or High Water, it was only a matter of time before Taylor Sheridan would direct one of his politically engaged, American frontier action thrillers. Wind River is an engrossing murder mystery that takes place on the Wind River Reservation in a freezing, snow-covered Wyoming and is as violent as Sicario. While Sheridan has delivered another perfectly structured, visceral, cinematic experience, it is, ironically, the dialogue and story that are the real letdowns. Meanwhile, the relationship between Jeremy Renner’s wildlife officer and hunter and Elizabeth Olsen’s rookie FBI agent lacks the mystery, tension and sizzle of the similar pairing of Emily Blunt’s naive FBI agent and Benicio del Toro’s experienced hitman in Sicario. Cory Lambert (Jeremy Renner), whose title is wildlife officer, culls wild animals threatening livestock and works in and around the Wind River Native American Reservation. He is called to the Reservation to kill an animal predator but instead finds the frozen corpse of Natalie (Kelsey Asbille), an 18-year-old Native American. The poor girl has not only been raped, but, as Cory explains in lurid detail, she died because her lungs burst from inhaling the freezing cold air. Only a woman desperate to escape someone more dangerous than the elements would risk running barefoot and half naked into the frozen night.

It is only because Cory believes the death is a homicide that FBI investigator Jane Banner (Elizabeth Olsen) is called in from Las Vegas, decidedly underdressed for the mission. She angers Natalie’s father, Martin (Gil Birmingham) early on by asking why he failed to file a missing person’s report, and looking askance when Martin replies that Natalie is 18 and can go out without reporting her movements to her parents. Outwardly, he is deceptively defiant, maintaining his composure and dignity. Inwardly, he is distraught, and, as we later learn, suicidal. Recognising that she is not equipped to investigate the death on her own in the inhospitable and unfamiliar area, Jane asks Cory to help her and he accepts. With Cory on board, Natalie’s mother agrees to lend Jane Natalie’s snow suit, which, in true Hollywood fashion, happens to be a perfect fit. In this manner the two (conveniently single) investigators head off together, and the film becomes a kind of buddy movie in the manner of Blunt/del Toro in Sicario and Jeff Bridges and Gil Birmingham in Hell or High Water. In fact, Birmingham, an actor with Comanche ancestry, also played a Native American cop as in Hell or High Water.

The investigation turns particularly tense and harrowing when, investigating the lead that Natalie was dating a white construction worker named Matt Banner (an impressive performance from Jon Bernthal), Cory and a posse visit his caravan. There they find a group of armed red-neck construction workers who act as guilty as they are. Soon everyone is pointing guns at everyone else until Jane runs in waving her badge and claiming jurisdiction.

But these thugs have as much respect for the FBI as they do for Native American women. The ensuing scenes are so nasty and violent that they are hard to watch, but curiously, the shootout makes an unsatisfactory climax. The characters are stereotyped and a curious denouement when Cory attends to frontier justice does not have the intended impact.

Wind River is, far more than Sheridan’s earlier scripts, an issue-based movie. The issues are imbedded in the script, but not all that subtly or smoothly. For example, Nathalie’s brother, Chip (Martin Sensmeier, who grew up on a reservation), is estranged from his parents, and living with a doped up, violent gang who are the original suspects in the case, as is Chip by association. He becomes less of a character than a symbol of the plight of Native American youth.

More significantly for Sheridan, Natalie is not the only disappeared girl whose life ended tragically. In a plot point that is just too coincidental not to feel contrived, it turns out that Cory’s teenage daughter was best friends with Natalie and she also died in tragic circumstances. We gradually learn about the fate of Cory’s daughter from his civil, but cold encounters with his Native American ex-wife who seems to blame Cory for their daughter’s death. It is significant that Cory’s daughter is half Native American as there is a caption at the end informing us that there are no statistics kept for the disappearances and deaths of Native American women, many of which go unreported or unrecorded.

Admirably, Sheridan has involved the Arapahoe and Shoshone tribes with the film and sent them the script for their approval. The authenticity of the film is impressive and the issues it raises are devastating and important. But it is ironic that when a Native American woman is found dead in the snow five miles from her home it is Cory, a white man whom Tribal Police Chief Ben (Graham Greene) depends on to track down the killers. Perhaps the tribal liaisons were resigned to the fact that American society has not only taken away their pride, livelihood, culture and land, but also their traditional expertise in hunting and tracking.