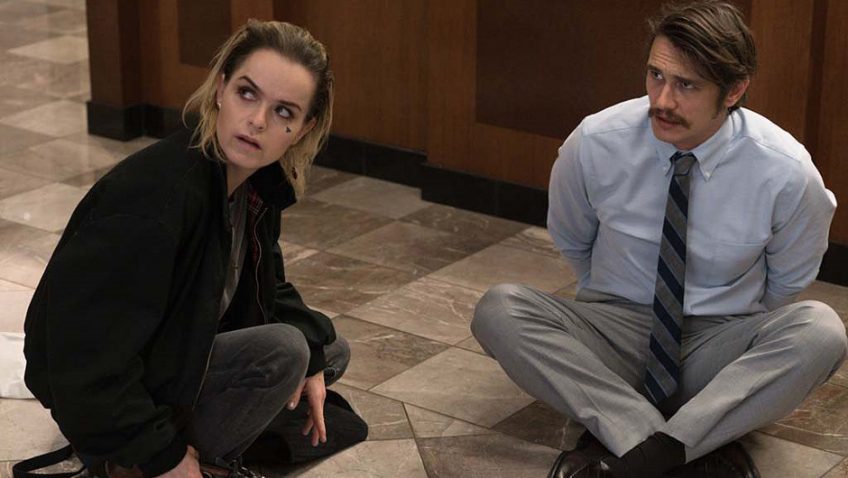 The Vault is co-written and directed by Dan Bush who made one film that people might still remember, the Signal, a horror film that made a lot of money back in 2007. As the title suggests, the vault is a heist movie, but Bush and co-writer Conal Bryne give it a high concept appeal by introducing us to what might well be the first heist- within-a-heist movie. It might also just be the first haunted bank movie because the Centurion Bank’s first heist, back in 1982, has left a lot of ghosts around and they are not the passive kind. This novel and promising premise starts out well but the smooth transition from heist to horror is as bungled as the Dillon siblings’ bank robbery, while little is done to distract us from the low-budget feel to the production. The opening titles are terrific: a montage of floor maps, newspaper headlines and CCTV footage of bodies being dragged along the floor, over which is played a haunting, slightly creepy Crimson and Clover by Tommy James and the Shondells. We also hear a recording of a 911 call alerting the police to a robbery in progress that suddenly ends in mid-conversation. What we do not know is if this montage is foreshadowing or a flashback, but we are soon to find out. In that respect, it’s a shame that the song, Crimson and Clover (which makes a dramatic reappearance at the end) is from 1968 and not from the first bank robbery of 1982.

The montage ends with a crane shot of the city streets full of fire engines attending to a huge fire near the bank which has echoes in last ten minutes of the film. The fire bodes well for the robbers as Police Detective Iger (Clifton Collins Jr), who is in the bank flirting with a pretty teller named Susan (Q’orianka Kilcher), is called away by the fire alarm.

The heist section of the film is well directed and cleverly written. Insecure ringleader Michael’s two attractive sisters, Leah (Francesca Eastwood, Clint’s daughter) and Vee (Taryn Manning) distract the employees of the Centurion Bank while the ‘firemen/robbers’ disable the cameras and check out the security. Vee distracts a teller with a complaint-turned-tirade about a bounced cheque while Leah occupies the manager by posing as a potential job seeker. When she asks the manager about the high turnover he has mentioned, he nervously wraps up the conversation with, ‘It’s an old building and people think they hear and see things.’ Francesca Eastwood in The Vault

The robbers place bags over the hostages’ heads and get to work. The situation becomes tense when the siblings discover that there’s only $70,000 in the bank. As the robbers start arguing about what to do next, a hostage is accidentally shot.

Suddenly a voice pipes up from under the bag saying, ‘I can help you.’ It’s Ed Maas (an underused and miscast James Franco), the assistant manager whom we saw early in the film having a cup of coffee in identical work clothes at 4:55PM. He tells the panicking robbers that they first have to disable the alarm and type in the manager’s pin by 5:20PM to avoid an automatic police call out.

Then, in exchange for a promise not to harm anyone, he tells them about a second vault in which there is an estimated $6 million. This is a kind of Bluebeard’s Castle: They are very curious to see the riches, but afraid of entering a forbidden room. When Kramer goes down to the mysterious vault and does not return; when the door to the basement locks itself and the security cameras start acting up, it’s a shame that Leah does not recall her conversation with the manager.

Francesca Eastwood gives a stand out performance as the loyal sister trying to hold everything together, and the rest of the cast hold their own. There are some nice moments of interaction between the individual hostages that are used to impart information to the audience. These scenes also humanise the robbers to the point where we almost feel sorry for their bad luck. In one such scene, Michael accompanies Susan to the loo, which, you suspect, is a strategic move on her part. During their conversation Michael softens and reveals to Susan that he is not a bad guy: he is in trouble and owes people a lot of money. His sisters have come along to help him.

The problem for the audience is that the heist is played so realistically that the introduction of a gory horror scenario, half shrouded by the darkness of the basement, is jolting, as though it’s part of another film. It is also clumsily shot and directed in contrast to the film’s first half hour. Bush is unable to create cinematic chills out of the chilling tale that Ed expands upon. The editing and music do not help bolster the fright level, nor does the fact that no one seems to be worried about going to the basement alone after Kramer disappears.

There is a nifty little ‘Sixth Sense’ secret exposed at the end (for those who have not already figured it out), but the filmmakers’ failure to come up with a third act reconciling the horror and heist that is the stumbling block. Instead, we have a confusing series of scenes in which the bank is set on fire and it’s impossible to see who has gotten out alive.