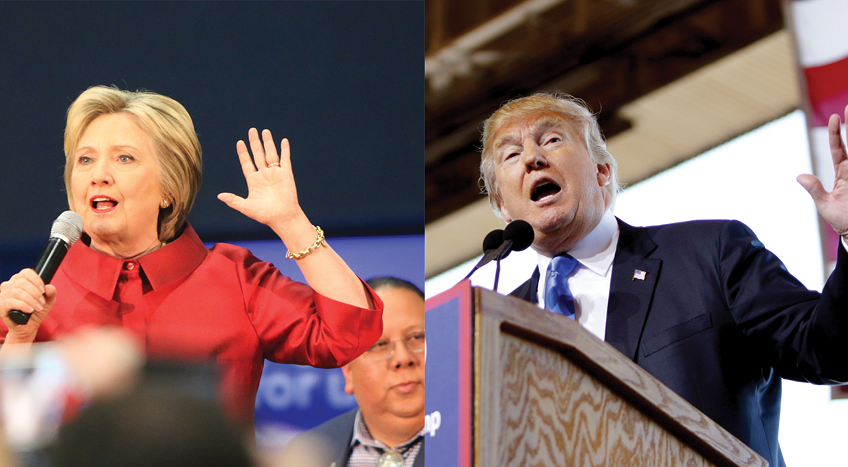 When I arranged to visit old friends who I have known for over 50 years in Texas in November, I did not realise that my going there would coincide with the presidential election, but the family reunion and birthday party I was going to turned out to be on the actual date, 8th November!

When I told people here that I would be in the USA for the election, their initial reaction was, like mine, a sort of fascinated horror, but I got used to the idea of being there and welcomed the probable opportunity to witness the election of the first woman President of the United States. Besides I would be amongst good friends who were backing Hillary, liberals, committed to social justice. As a result, I was fairly isolated from the views of Trump supporters, apart from watching the media and hearing reports. For example, one of my friends told me of a perfectly pleasant lady who told her that she saw Obama’s reforms quite literally as heralding the apocalypse.

On the day of the election we were busy with cards, presents and a celebration lunch. All of the family, like many Americans, had already voted before the date. But in the evening, the TV was switched on as voting closed at 6 pm. Almost from the start things felt negative for the Democrats, and as the evening wore on, the quiet confidence we had all felt started to change to concern and then to a realisation that the worst seemed to be happening. It was still fascinating to see the results coming in county by county starting in the East and spreading their way through the time zones. I only lasted out until Central Standard Time results were coming in. At this point Florida was uncertain but then we saw that Michigan, and worse still Wisconsin, where the Democrat majority had never been in doubt, both looked like they were going to Trump. That is when I, and most of the family went to bed.

The full implications of the Electoral College system had not struck me before witnessing the election. Although the popular vote in each State might be split fairly equally between candidates, in the end, in all but two States, it is the majority that determines where all the Electoral College votes go. For example, in South Texas, where I was, the majority voted Democrat and for the State as a whole 43% of the votes went to the Democrats. Effectively South Texas votes meant nothing as the Republicans got all 38 of the electoral votes. At the national level that is how Hillary actually won the majority of votes i.e. the popular vote but failed to win the Presidency.

I found the TV coverage of the Presidential election frenetic. Although we channel hopped – even giving Fox News a bit of a go – the screen always seemed to be full of different images with continual breaking news streaming across the bottom. Added to this was the fact that in the USA the colours of the parties are reversed in comparison to the UK, so that the Democratic party on the left, is represented in blue rather than red. Watching the TV I was always having to mentally transpose the ‘good’ states and the ‘bad’ on the ever-present map.

In the morning, we woke early to the news of the Trump triumphant. There was real despondency and some tears. I asked for first reactions to why Hillary had lost:

‘Because Hillary is a woman?’
‘It’s a reaction to having a Black President’
‘Obamacare’
‘immigration, trade, loss of jobs all linked together’
‘The voting system favours the Republicans’
‘The right-wing media’

My feeling was that the Brexit example did not help. I had a crushing deja-vu from that morning in June when I woke at four in the morning put the radio on and heard that we were out of Europe.

After breakfast, I went out and walked to clear my head and met an older man in a tracksuit coming the other way. As he passed me he asked me: ‘Good day? Bad day?’. At first I thought he meant the weather, which in South Texas in November is changeable. Then I realised he was talking about the election. I hesitated as a visitor not wanting to offend, and he said smiling broadly and giving a thumbs-up sign: ‘Good day!’ It might have been for him, but what about the country?

Marianne Coleman (author with Caroline Lodge and Eileen Carnell of The New Age of Ageing: How Society Needs to Change, published September 2016 by Policy Press)