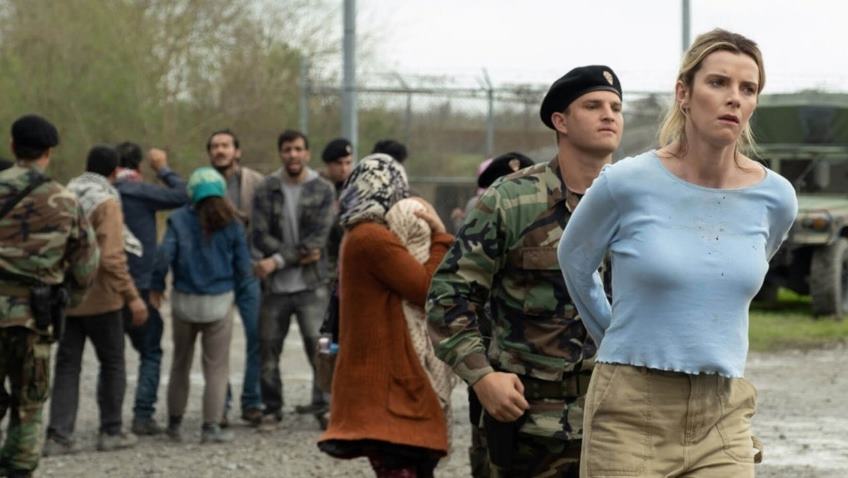 Political dynamite: The Hunt is a weak satire, but a tense, fun thriller.

The genesis of Craig Zobel’s (Z for Zachariah, Compliance) controversial film The Hunt can be traced to two dates that are not in themselves particularly momentous. On January 19, 1924, Richard Connell’s short story entitled The Most Dangerous Game was published in Collier’s. Ninety-two years later, on September 8, 2016, Presidential hopeful Hillary Clinton said in an interview, ‘You can take Trump supporters and put them in two big baskets. There are what I would call the deplorables — you know, the racists and the haters, and the people who are drawn because they think somehow, he’s going to restore an America that no longer exists.’

Connell’s much-adapted short story is about a rich, big-game hunter from NYC, who is shipwrecked on an island where he is hunted by a Russian aristocrat. Zobel’s (and writers Damon Lindelöf and Jason Blum) idea was to update the story using the loaded word “deplorables” from Clinton’s speech to deliver a satirical thriller about the liberal elitist/right wing, populist divide in America.

The violence is cartoon, the characters are caricatures and the provocative satire is not as sharp as it would have us believe. But the film is infused with nail biting suspense and it’s a blast watching Afghan veteran Crystal May Creesy (Betty Gilpin, from Netflix’s Glow, superb) demonstrate her army training and survival skills in the inhospitable territory of Manorgate, exact location: unknown.

We do not know any more about where we are than do a group of disparate people who wake up with horse-like bits in their mouths in a wood surrounding a field. They soon discover one another in the field and wood. In the middle of the field is a crate, that, when opened, reveals weapons with which the strangers arm themselves, and a pig named Orwell. Before the confused and frightened men and women can even try to make sense of things, they become the targets of invisible hunters.

The visual graphics and CGI should not be ignored come award’s season and they produce a series of novel ways in which characters on both sides meet their makers. One Hunted woman runs and falls into a pit landing on spikes. A chivalrous young man pulls her out, only to be blasted to smithereens himself. The victims scatter in panic, and are killed off by hand grenades, landmines, machine guns – and arrows.

The audience has at least had the benefit of a prologue showing an on-line conversation setting the scene for the drugging and abduction of about a dozen “deplorables”, and a violent scene in a private plane in which one of the victims wakes up too soon and threatens the liberal elite passengers. Although we do not see her face, the ringleader, Athena (Hilary Swank), emerges to stick the spiked heel of her shoe in the man’s eye. Just as the man expires, he sees, or we do, a pretty blond in a blue jogging outfit. We then see her in the field with the bit in her mouth.

One of the Hunted makes it over the fence to a roadside Mom & Pop (Amy Madigan and Reed Birney) convenience store and gas station. Finally, in safe hands, he asks to use the phone and call the police. The ultimate horror is when you realise the police you’ve called are in on the act. There’s a sick joke when Pop, thirsty from the ordeal, takes a swig of a drink for sale in the refrigerator case. ‘’Stop!” Mom warns, concerned not that it’s been poisoned, but by the high sugar content.

So far however, we do not really know how to identify the Hunters (the word deplorable in the on-screen conversation is the only clue) and the Hunted, aside from some heavy beards (Hunted). The fact that they were found in bars and drugged is just as likely to apply to rednecks as to Manhattan intellectuals.

Then, in the nick of time, the working class, supposedly right wing, Trump-supporting side, and the film, find a saviour in a pretty, thirty something blond who comes into the convenience store, chewing gum and looking cool. This is the previously mentioned Afghanistan army veteran Crystal May Creesy, and what she does not know about combat survival is not worth knowing. It would be tempting for anyone of the Hunted to jump in the car outside the convenience store, but Crystal moves slowly like a big cat and inspects the car, noticing it is wired to explode.

Who can Crystal trust? What the film does so well is to introduce us to characters who hang around long enough to surprise us, or who are bumped off almost immediately, most of whom cross Crystal’s path. Crystal does not trust anyone, or anyone’s version of reality. The Hunters have even hired (from central casting) a phony migrant leading a band of refugee women and children, but the landscape is full of real and metaphorical plants.

The fun we have watching Crystal clear the path for a one-on-one confrontation with Athena in her swanky villa is comparable to that of the heroine of Coralie Fargeat’s Revenge, and just as revolting, if not as colourful. Crystal is a delight to watch, so it’s a shame that the climactic meeting with Athena is anti-climactic. Here we could have used some of the chilling psychological horror of Zobel’s riveting 2012 thriller Compliance. Based on a real phone call scam, a man posing as a police officer convinces a restaurant manager in a fast food outlet to carry out unlawful procedures on a “suspect” employee. The film again plays with the notion of how a seemingly rightminded person can be drawn into someone else’s sick reality.

There is an abundance of quips, jokes and dialogue throughout the film that spoof liberal values and lifestyles. Most of them feel tired; others are confusing or just too obvious, without revealing any new insights into the nature of the divide or what really differentiates the two sides. The “sugar” joke is funny because of the juxtaposition between the tension of the violence and the mundane health concern that follows. Others fare less well. On the private plane, Richard rejects the caviar and champagne but asks for “Italian vegetables and a little fish”, suggesting he is not a vegan after all and perhaps missing a trick.

There are a couple of speeches, too. Athena delivers one to Crystal that includes, ‘you people twist the truth around until you get what you want’, when Crystal has a good antenna for the truth. This, of course, is intended to warn us about stereotyping, and Athena is surprised to learn that Crystal has read Animal Farm. But have the filmmakers learned the lesson? The film depends upon these stereotypes being fleshed out and brought to life and here, the film fails.