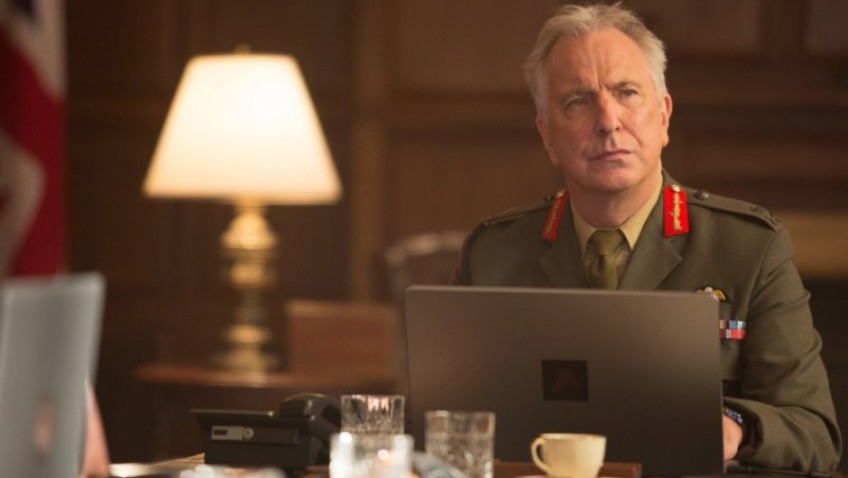 The ethical controversy that has surrounded drone warfare without managing to curtail its growth is put at the heart of the nail-biting thriller, Eye in the Sky.  Director Gavin Hood turns a reaper drone operation into such an immersive experience – it even takes place in near real time — that you feel you are taking part in the heated debate. The filmmakers are no strangers to tense, political dramas.

West London writer Guy Hibbert (Shot through the Heart, BBC’s Complicit,) and South African Director Gavin Hood (Rendition, Tsotsi) – who has a small role as Lt Colonel Ed Walsh in the film – crank up the excruciating tension to breaking point, compelling the viewer to experience the pressure of making an impossible decision. Military advisers ensure an authenticity that permeates every aspect of the film. You would never know that it was shot in the back lot of a film studio in South Africa and Pinewood Studios.  The very locations are designed to convey a message, with the contrast between the bright, hot, dusty impoverished village in Nairobi; the various social events from which international decision makers are called to the phone, and the cold, bunker like military headquarters where Colonel Katherine Powell (Helen Mirren) has an urgent job to do.

Powell, working out of the Joint Command Permanent Headquarters in Northwood has spent the past six years tracking a slippery radicalised British woman who is now a member of Al-Shabaab.  A surveillance drone puts her in a safe house outside of Nairobi. Powell issues an order to capture the woman alive.   Special Forces approach the house, but fate throws a spanner, or two, in the works.

The first set-back is flagged up when it looks like the woman is not alone.  Kenyan Field Agent Jama Farah (Barkhad Abdi ,“Captain Phillips”) goes undercover as a market trader to plant a short range video bug, hidden in a cigarette packet, in the house.  It’s a dangerous job as the house is surrounded by hostile, militia, one of whom eventually recognises Farah as a government supporter.  Taking orders, Farah positions the little bird remotely and, like Powell, we see the pictures it beams back. There appear to be explosives and two suicide vests on the bed.

Also watching from a meeting room in Whitehall is Lieutenant General Frank Benson (Alan Rickman).  Powell is convinced now that they are planning an imminent attack and, changes the order from ‘Capture’ to ‘Kill’.  The problem is, she needs legal clearance to change the rules of engagement from Capture to Kill.

Benson agrees that a US military drone operated out of Nevada should despatch a missile. Benson, however, must consider the opinions of various UK government participants around the table who endlessly debate the repercussions and negative publicity of an unauthorised attack on a foreign soil. They debate the longer term value of putting a ring leader out of commission, with the immediate ramifications from ‘collateral damage’. Powell insists many more civilians will die if the suicide bombers are allowed to leave the safe house – and the clock is ticking. In the end the group reach a stalemate on a legal technicality and refer the question up to Foreign Secretary (Iain Glen) who is on a trade mission in Singapore and inflicted with a mild case of food poisoning. He suggests that they try to minimise the collateral damage and that they seek advice from the US Secretary of State – who interrupts a table tennis game in Beijing to take the call.  He approves without hesitation. ‘Their citizenship doesn’t protect them. They made a decision to join All Shabaab. If you have your number 3,4 and 5 targets go ahead.’

This would be music to Powell’s ears but, sitting in a little hut behind a control board and monitor in Nevada, US pilot Steve Watts (Aaron Paul) spots an adorable little girl (Aisha Takow) enter the kill zone, where she begins to display loaves of bread on a table. A similar ethical dilemma was faced by Ethan Hawke’s pilot in last year’s film Good Kill, a film that focused on the pilot’s mental health and failed to make to mark.

In an attempt to engage the audience on an emotional level, the filmmakers make us privy to her back story as her liberal father allows the lively girl to spin a frowned-upon hoola-hoop and her loving mother sends her out with the bread. The girl is very close to the safe house.  Watts knows that Hellfire missiles launched from high-flying drones are not only less precise than a sniper’s bullet, but throw up a lot of debris that can kill civilians. He asks Powell to recalculate the collateral damage.

As the heated debate goes on in the London war room, the suicide bombers are now dressed and standing before a video camera. A frustrated Powell sends Farah (now hiding from local militants) to buy up the girl’s bread while brow-bending her operative to fudge the points in order reduce the estimate of collateral damage.

The performances are, across the board, terrific, particularly when you consider that the lead actors are never on screen at the same time and talk to one another through screens and phone lines.  Special mention goes to Iain Glen for humanising his small role as the Foreign Secretary and making it so memorable; and Barkhad Abdi, for taking us with him on a perilous mission. Abdi, a Somali plucked from obscurity for his Oscar-nominated and BAFTA winning role in Captain Phillips, his feature debut, here reaffirms his great talent.

Hood and Hibbert intentionally juxtaposes the humorous – and some of it is, indeed, laugh out loud funny – protocols and dithering, complete with its euphemistic language, jargon and political-speak with the tension-filled reports of the suicide bombers’ progress and the life and death issue of a cute little innocent girl.  Megan Gill’s superb editing judiciously cuts back and forth between Nairobi and the decision makers thousands of miles away who will determine their fate.

While this is what gives the film its entertainment value, the glib contrasts feel somewhat contrived to evoke a reaction, and the mixture of high satire with tragedy is sometimes jarring.  One also has to wonder whether the people with their finger on the button would agonise quite so much if the cute little 8-year-old girl from a loving, ordinary family were a 60-year-old man farming a big poppy field.

The film is dedicated to the memory of Alan Rickman whose outstanding performance in Eye in the Sky will certainly add to his lasting legacy.