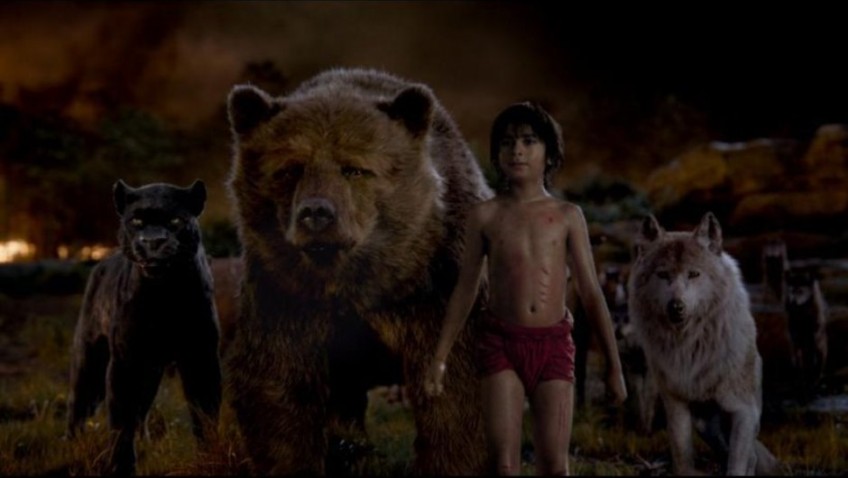 Anyone who remembers the New York actor Jon Favreau from Swingers and The Break-Up or caught him more recently cooking in pop-up caravans in the film Chef, might be surprised to find Favreau at the helm of a 3D, animated adaptation of Rudyard Kipling’s The Jungle Book.

The multi-talented Favreau is also, however, a producer, writer and director; and among his directorial efforts are Elf, Iron Man and, not his greatest hour, Cowboys & Aliens.  The Jungle Book, a highly-entertaining fantasy adventure film for all ages, is without a doubt his finest hour to date.

The camera leaves the Disney logo, the Castle, behind and races forward to a tropical rainforest. We enter under the title logo hanging between trees over a stream. From the stillness of the jungle comes a flurry of movement as a young boy, Mowgli (Neel Sethi, in his feature debut), naked but for a red turban around his private parts, dashes through a green paradise with a pack of wolf cubs.

Mowgli, the man-cub, has been adopted by mother wolf Raksha (Lupita Nyong’o) and father wolf Akela (Giancarlo Esposito). A narrator tells us that Raksha ‘was the only mother he ever knew.’   Mowgli climbs a tree and seems as sure footed on the branches as he is on the ground, until a rotten branch breaks and he comes tumbling down. The black panther Bagheera (Ben Kingsley), who found Mowgli as a toddler alone in the jungle and brought him to Raksha, is close by. The lesson Mowgli learns from his fall will serve him well toward the end of the story.

Bagheera and the brown bear Baloo (Bill Murray) – a great double act from Kingsley and Murray — are Mowgli’s teachers and protectors.  Justin Marks, who wrote the screenplay, changes around the order of certain events in the book.  He introduces us to Baloo later in the film when Baloo rescues the boy from the python Kaa (Scarlett Johansson).  Marks also delays the appearance of the film’s principal villain, the Bengal tiger Shere Khan (Idris Elba).  In the book Shere Khan appears early on at the mouth of Akela and Raksha’s cave, too big to invade.   His entrance in the film is far more dramatic.

It is the dry season and, as part of the Water Truce, all the animals of the jungle meet at the Peace Rock for their last good drink of water. Raksha warns Mowgli to be discreet as some of the animals have never seen a man-cub before; but Mowgli is a rascally little boy and manages to ruffle a few feathers.

When Shere Khan makes his entrance, the silence is palpable. Mowgli cowers behind a rock. Mankind is a destructive force and the scars on the tiger’s face are evidence of man’s cruelty to animals.  Shere Khan will respect the Water Truce, but will not rest until he has killed the man-cub. We soon learn the origin of his vendetta. Mowgli overhears the council of wolves argue about how many of their own would be sacrificed to protect the man-cub and he volunteers to leave.  As Bagheera accompanies him towards the camp of men the pair are ambushed by Shere Khan. In one of the most visually spectacular action sequences, Mowgli escapes by hiding among a herd of stampeding buffalo before hitching a ride on one.

It is not until Mowgli finds himself in danger in the jungle once again that he meets Baloo who, in exchange for having saved his life, asks Mowgli to collect honey for him.  Despite being stung by bees, Mowgli loves Baloo. Baloo is surprised that Mowgli has never heard a song, and sings The Bare Necessities — borrowed from the 1967 film version of the book.

When Bagheera finds Mowgli at Baloo’s cave, he reveals that the man-cub has been duped as bears do not hibernate in the jungle.  Embarrassed, Baloo shrugs, ‘Not full hibernation, but I nap a lot.’  During this pleasant idyll, Mowgli saves an elephant calf, and, later with lives in the balance, is rewarded handsomely for his altruism.

The second musical number, I Wanna Be Like You, is delivered by King Louie (Christopher Walken), a huge Bornean orangutan who has kidnapped Mowgli for The Red Flower (fire).   Being the closest species to man, King Louie is the only animal who actually wants the Red Flower, seeing it not as a weapon of harm, but as a source of power. Mowgli, remembering from his lessons that The Red Flower is evil, courageously refuses, though his life is in grave danger.

The big finale is a tour de force of CGI animation and provides a heroic ending to what is, after all, a classic coming-of-age story. The script is rich in detail and mixes humour (a few of the lines will have you laughing out loud) with pathos (which never becomes schmaltzy). This is the jungle, though, and it is meant to be scary – without frightening the younger audiences.  The film is a feast for the eyes, right down to two little turtles who crawl gingerly across the pages of The Jungle Book, in the end credits, hiding in their shell to avoid a nosy predator. Favreau himself voices Pygmy Hog and Sam Raimi (who directed Disney’s 2013 film, Oz the Great and Powerful) has a cameo the Giant Squirrel.

You could criticise the addition of songs (why so few, or why any?) that do not advance the action, who can complain about listening to Chris Walken sing?  While the adaptation is fun, fluid and imaginative, Marks omits an important element of the story, and one that all the school children in the audience would appreciate.

Mowgli has the capacity to remember more than the other animals and so Baloo ensures that he learns the language and laws, not just of the wolves, but of all the jungle animals.  Baloo gives Mowgli a few soft jabs with his giant paw to encourage learning.   Baloo defends his actions to Bagheera:  ‘Better he should be bruised from head to foot by me who loves him than he should come to harm through ignorance.’