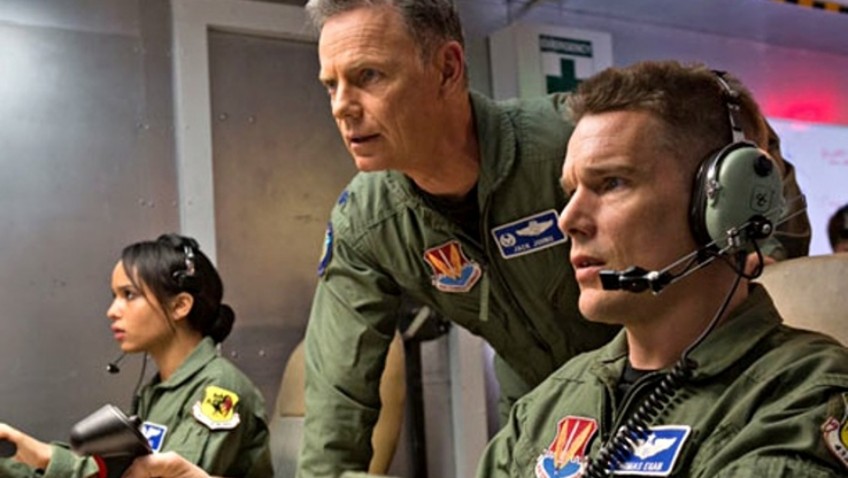 An intelligent and timely film about drone warfare

is, for the most part, an intelligent and timely film about drone warfare from the talented Writer/Director Andrew Niccol (In Time, Lord of War, The Truman Show, Gattaca) working once again with the Academy Award nominated Ethan Hawke who co-starred in Gattaca. Good Kill

approaches its topical subject a bit like The Hurt Locker approached the subject of bomb disposal and American Sniper approached the subject of targeted assassinations: it explores the psychological impact of the work on the individual military employee and on his family. Drone warfare, of course, is far more controversial because the drone, which holds all the cards, is operated very remotely and the opportunity for collateral damage is so great.

All three films focus on men (and women) suffering as much from shell shock and military fatigue as from guilt. They also seem to be addicted to their jobs, or in the case of Major Thomas Egan (Hawke) his former job as a real pilot. The obsession derives as much from the thrill factor as from the belief that they are keeping American safe for democracy.

Fighter pilot Major Egan admits that he misses the fear up in the sky. He loved flying F-16’s in Iraq and Afghanistan. His flying is very different now and it is driving him to drink. The cockpit is a console inside a claustrophobic caravan on a US military base outside of Las Vegas. In this simulated flying, he never leaves the ground. ‘I feel like a coward’, he complains, ‘taking pot shots from an air conditioned cubicle.’

After bombing dozens of targeted enemy all day, he drives home to a barbeque behind his new suburban house where he lives with his wife Molly (January Jones) and their two children. For Molly, the job is perfect: Egan is home every night with his family and the risk of death has been eliminated.

But Egan misses the thrill of the real thing and his petitions to return to flying real planes in the Middle East are rejected. It is more efficient and economical to deploy good pilots in Nevada than in the Middle East. Egan’s frustration and consequential drinking are affecting his job and marriage.

Things get worse when the CIA takes over and begin to call the shots. The CIA has a much more cavalier attitude to killing than do the military and women, children and funeral gatherings are all fair game. Egan, and his new co-pilot Vera (Zoë Kravitz), are left to grapple with the moral consequences of the increasing collateral damage.

Hawke is terrific as a man forced to question his values in light of a new job definition and changing technology. His guilt, moral outrage, anger and fragility are palpable and his intensity is frightening. Jones is also credible as the Las Vegas showgirl turned stay-at-home housewife who feels her husband slipping away. She is not only helpless to help him but increasingly afraid of him.

Niccol effectively lays out the moral issues, but he goes overboard with a rape-victim subplot in order to give the film a semblance of (believe it or not) a happy ending. Hawke’s sidekick Vera comes across as being so moralistic and aggressive with her criticism of the drone programme that you wonder how she lasted so long in the military. She is clearly Niccol’s mouthpiece, but her character sounds more like an anti-war protester picketing outside the compound than a pilot inside it.

While it is important for Western audiences and Americans, in particular, to see the moral implications of the drone strategy played out in a drama, you have to wonder if a film like this does not play into the hands of the very fundamentalists the drones are targeting. Those intent on persuading influential minds of America’s evil intentions need only pirate the scenes in which women and children are bombed and a certain team euphoria results from the taking of Muslim lives. The title is supposed to be ironic, as there is no such thing as a good kill, but try telling that to an angry young Muslim boy watching this film. The Taliban or ISIS would have a field day: they could use Vera’s speech condemning the immortality of the CIA and the drone attacks as a recruitment tool.