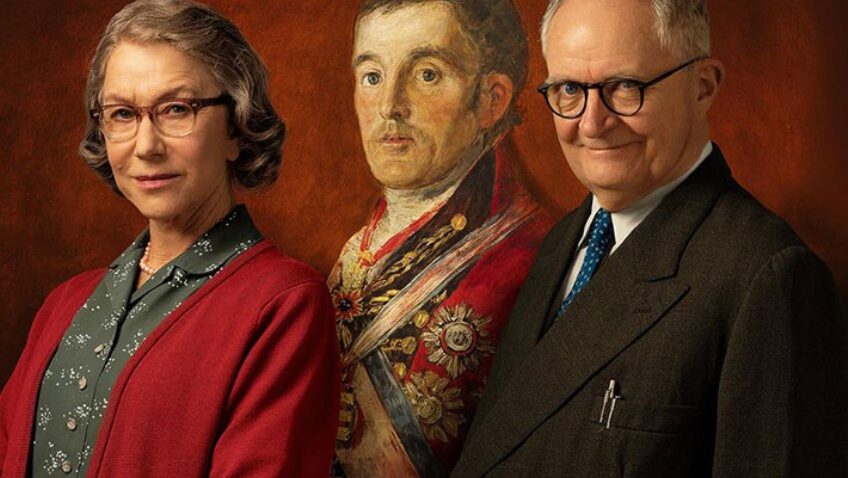 Though best known as the director of Notting Hill, nobody made films for and about the over 60s like Roger Michell. And that makes his premature death last year, at age 65, all the more tragic. In The Mother, Le Week-End (his masterpiece), Nothing Like a Dame and now The Duke, starring Jim Broadbent and Helen Mirren, Michell gives older characters meaty roles, and they are not patronised, idealised or turned into clichés. His characters are not in Zimmer-frames or in comfortable retirements and do not all have accomplished, supportive children.

None are on Saga cruises, although in Le Week-End an under-achieving academic couple worried about retirement, spend a revelatory weekend in Paris, trying to revive the spark of their honeymoon happiness and self-confidence thirty years earlier. Some of Michell’s over 50s are working (some lucratively, most not). They feel envy and have sexual desire and aspirations, a sense of humour and – especially in The Duke – a timely political conscience.

The Duke is based on a true story, and from the protagonist’s name to his wacky Robin-Hood heist of a Goya portrait from The National Gallery in 1961, you couldn’t make it up.

A blue-collar worker nearing retirement age (the real Bunton was a retired bus driver) Kempton Bunton’s (Broadbent) idealistic, democratic principles make it difficult for him to keep a job. We see this in a scene in which he intervenes when an ethnic minority co-worker is singled out by their boss for taking too long a lunchbreak. The compliant co-worker, afraid of losing his job, rushes back to the factory floor. It is Bunton who loses his.

Bunton lives on a street of Newcastle row houses straight out of an L.S. Lowry painting, with his long-suffering wife, Dorothy (Mirren) and one of his two sporadically employed sons, Jackie (Fionn Whitehead). Production designer Kristian Milsted and the art directors have a field day with the shoddy, cosy, cramped interiors and period furnishings, while archival footage of London reminds us how seedy and dull the capital looked in the 1960s if you strayed from The Kings Road.

Bunton takes on the world, but his cause celebre is the TV Licence, which he petitions to have scrapped for OAPs. Dorothy, who is the cleaning lady for a local politician, insists on paying the licence when the inspectors pay the Buntons a humiliating visit.

If Bunton believes the TV licence is an unfair tax, he is equally incensed by the news that, to keep a portrait of the Duke of Wellington by Francesco Goya in the UK, the government has spent £140,000 (nearly 3 million pounds today) of taxpayer’s money to acquire it.

Bunton’s son Jackie knows that his father’s campaigning zeal and his attempts to sell semi-autobiographical plays and stories, help contain the pangs of guilt and unvented grief over the accidental death of their daughter, Marion. Dorothy, for her own reasons, represses the death, refusing to talk about Marion. Her reticence makes Bunton’s guilt more acute.

When Dorothy reaches the end of her tether, Bunton promises her that he will buckle down, renounce his projects and find a job after one last trip to London. As well as trying to sell his writing, it seems he is also going to pay the National Gallery a visit.

Michell is after humour, but also emotional truth, and, when the subplot about Marion is resolved, you might shed a tear. Mirren (The Queen, Eye in the Sky, Woman in Gold) is one of the UK’s great dramatic actresses and arguably Broadbent’s best portrayal of a husband is not in the hackneyed, tear-jerker Iris, or as Denis Thatcher in The Iron Lady, but in Le Week-End.

Not surprisingly, however, for the playwright of One Man, Two Guvnors, scriptwriter Richard Bean (co-writing with Young Marx writer Clive Coleman) the overall tone is kept light by Dorothy’s quick, dead-pan one liners and Bunton’s hilarious courtroom performance.

For reasons that become apparent, we are are spared the typical, long sequence of preparations and planning for the heist, although we do learn that the National Gallery’s security locks and alarms were shut off in the early morning to allow for cleaning. Regrettably, though, in addition to Dorothy having nothing more to do than fret about her husband, the middle section is a bit flabby as Kempton tries to hide the portrait from Dorothy in their small house, only to be blackmailed when his hiding place is discovered by someone else.

The final quarter of the film picks up with the courtroom scenes, which are worth the price of admission. Jeremy Hutchinson (Matthew Goode) – the QC of lost causes, who defended the spy George Blake, Christine Keeler and the publishers of Lady Chatterley’s Lover – devises the perfect defence strategy for this lost cause when he learns to his dismay that Bunton has already cheerfully confessed. Hutchinson sits back in silence throughout the trial, and then watches his client’s rapport with the courtroom crowd prepare the way for his clever closing remarks.