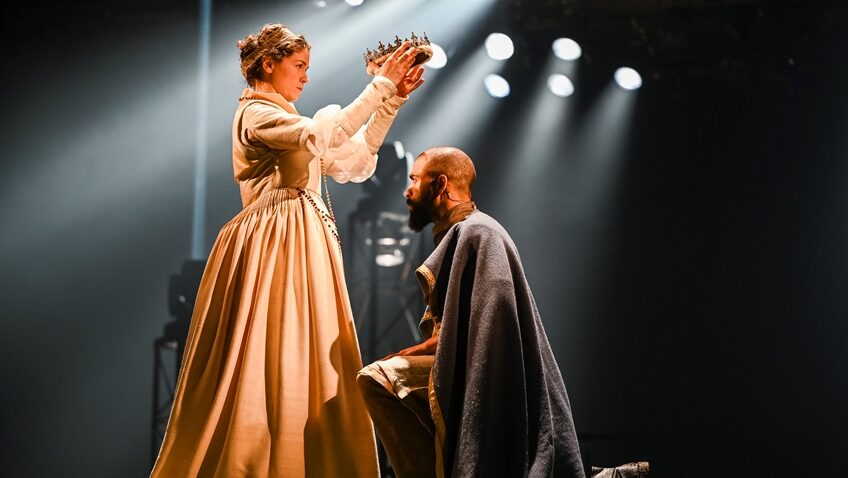 A broody Macbeth mood is conjured up by Hayley Grindle, her set filling the stage with earth-brown, bleak remoteness and spooky gloom. In the flattened, stony soil sits a dark puddle, ready to serve as cauldron, ditch to drown in or hand-washing bowl for an obsessive hand-washer. Stark, pylon riggings rise up all over, while dull boards form a floor, at whose centre hangs a vast wooden drawbridge, suspended by chains. When lifted to create a two-tier stage for action above and below, a metal-frame underside is exposed. Searchlights, lightning strobes and columns of bright white light, eventually spotted with red, cut through the widespread gloom as trumpets, throbbing pulses, thunderous, echoing knockings and Dr Who style sound effects create moments of tension and suspense. Enjoyable (though also distracting) is the use of stylised, slow motion movement for the silent banquets and carousing that go on as soliloquies are delivered elsewhere. Other than chairs, goblets and swords few props are used, and costumes add medieval, shabby drabness.

With a specific aim of drawing people back to theatre, especially youngsters studying the play, plus a commitment to all-inclusive theatre-making as regards both casting and audience needs, The Scottish Play has headed south under Amy Leach’s direction to become more A Yorkshire Play. Dark-skinned, sturdy Banquo (Gabriel Paul), with ponytail of dreadlocks, has the deepest accent of all. The script has been cut, changed and added to in various places, as have some scenes, so Donalbain has now disappeared altogether and Macduff (Adam Bassett) has a lot more to do – like being the bloody man from the battlefield for a start. Audio description is integrated (eg the witches have a little extra narrative) and, as the Macduffs are a non-hearing couple, signing is extensive, their lines interpreted and spoken by other characters who also sign. This is an approach that works fabulously well in enhancing many a musical, panto and drama. It’s less smoothly done here, though, with the delivery of Shakespeare’s musical flow and rhythm becoming interrupted and disjointed at times, leading to a loss of momentum, engagement and impact.

Definitely engrossing for the teenagers is the comic relief scene with the porter, who has them giggling at his elaborate, crude mimes and the use of his sword to clearly demonstrate the effects of drunken impotence. Meanwhile, the three weird sisters should cause no nightmares: less witch-like, less hag-like and ugly, less wicked and malicious than often portrayed, they’re more like regular people who are dippy eccentrics – perhaps more like those who lived in remote rural spots and were called witches in their day but really were not. Of course, Shakespeare wrote Macbeth for his patron, James I (who’d just escaped assassination himself in the Gunpowder Plot) at a time when witch-hunts were going on all over Britain and Europe and James, himself, was obsessed with witchcraft and the supernatural. Shakespeare even drew on James’ own book, Daemonologie, and the consummate evil of witches was taken as a given.

Less blatantly evil, too, is Jessica Biglow’s Lady Macbeth. Unusually, she wins sympathy in the added opening scene, as, comforted by her grieving, loving husband, the bearded Macbeth (Tachia Newall) she cradles their tiny, dead baby. Later on, she also undergoes a bloody miscarriage. Far from being a strong-willed, ruthless, venomous harridan, she uses a warm, smiling, somewhat informal, chatty approach to persuade her husband to murder King Duncan before going out of her mind with guilt. This isn’t entirely convincing. Macbeth’s psychological journey, meanwhile, takes him from a warm, loving spouse to a cool, distracted, distant one before heading to destruction as a full-blown, raging, out of control tyrant.

In this production that’s alive with action, noise and visual effects there’s a bit too much by way of distraction at times, perhaps, while the delivery of lines, for various reasons, sometimes impedes the flow of language and thought in the unfolding of the story, compelling though it always is in its own right.