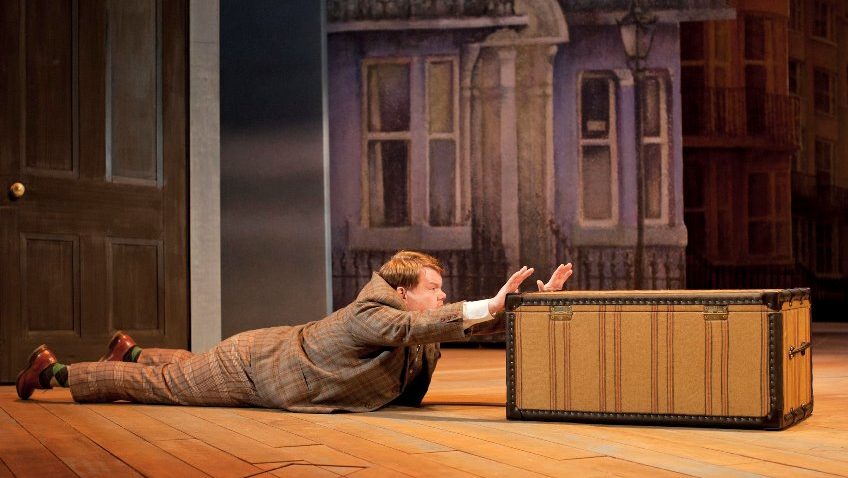 You can now see National Theatre productions on line for free

Robert Tanitch reviews the One Man, Two Guvnors on line

Imagine no theatre for 18 years!

Today, we are more fortunate and audiences around the world can stream live productions for free via YouTube.

The National Theatre had a big box office success with One Man, Two Guvnors, Richard Bean’s adaptation of Carlo Goldoni’s A Servant for Two Masters in 2011.

After it had toured the UK it then preformed in London’s West End, first at the Adelphi Theatre and then at Theatre Royal, Haymarket. It also played in New York.

Goldoni wrote A Servant for Two Masters in 1742 specifically for Antonio Sacchi, the foremost commedia dell’arte Harlequin of his day, and when he published the play ten years later, he incorporated the improvisations, comic business and slapstick Sacchi had invented.

The National’s success was also due to a series of masterly comic routines and highly rehearsed ad-libbing by James Corden who plays the cheeky, resourceful and very hungry servant, who is both clever and stupid. The role requires exceptional physical and vocal agility.

Richard Bean updated the action to the 1960’s and set it in Brighton.

James Corden, very likable and surprisingly agile, instantly establishes a rapport with the audience. The high spot is the classic verbal and physical fight he has with himself.

Nicholas Hytner and Cal McCrystal direct the knockabout with skill and there is hilarious farce from Tom Edden as a doddery, deaf and very old waiter, who constantly falls down the stairs. Oliver Chris is spot-on as a public school idiot bully.

The National Theatre schedule on YouTube in April is as follows: