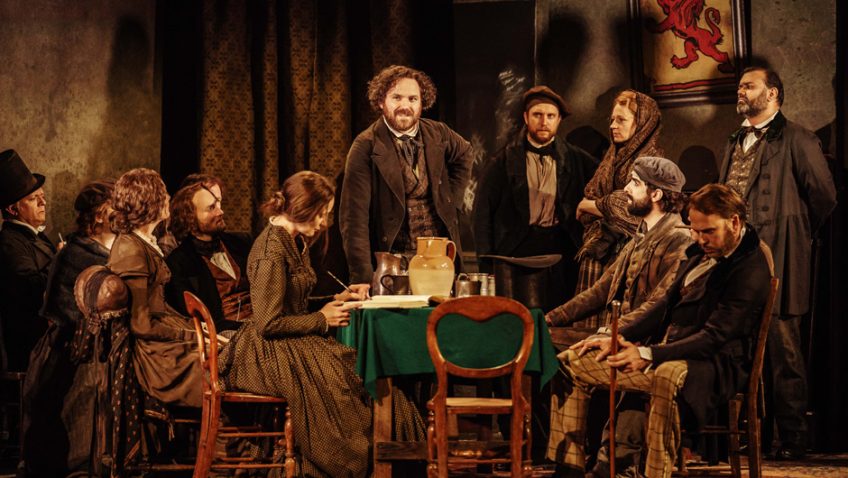 A big welcome to Bridge Theatre and wishing it every success

London has a new commercial theatre and everybody in the theatrical profession and regular theatregoers will be wishing it well and wanting it to succeed.

The Bridge Theatre is on the South Bank between Tower Bridge and County Hall. It is co-founded by Nicholas Hytner and Nick Star, who ran the National Theatre so successfully. The theatre, which can house 900, has been designed to be flexible and to allow for different configurations. The repertoire will be mostly new plays with an occasional musical and an occasional classic.

The opening play is Young Marx by Richard Bean and Clive Coleman.

The poster of a young man climbing up a Victorian lamppost immediately prepares audiences for a comedy.

The image recalls a similar image for Richard Bean’s One, Man Two Gunvors, also directed by Nicholas Hytner, which was such a success at the National Theatre and in the West End and in New York.

Bean had been offered the opportunity to write the libretto for a comic opera about Karl Marx for an opera house in Bonn, but he couldn’t face writing a script in rhyme.

Most people’s image of Karl Marx is based on Laurence Bradshaw’s bust on the memorial in Highgate Cemetery of a stern old man with a white beard.

The 32-year-old Marx was a roguish young Bohemian roué, boozing, swearing, procrastinating, sponging off Engels, the cotton lord communist, and cheating on his wife (Nancy Carroll).

He spends much of his time hiding in a cupboard and up a chimney from creditors, bailiffs, German spies and the police.

The script has lots of jokes and Rory Kinnear is an engaging actor. Bean swears that what he has written is almost all true.

Marx arrived in England in 1850 having been exiled from France, Belgium and Prussia. London was awash with refugees. He lived in poverty and squalor in Dean Street in Soho.

There is farce in a pawnshop when he is accused of theft and in the British Library when he and Engels are involved in a brawl. Charles Darwin produces a rabbit out of an empty handkerchief.

There is more farce when Marx learns that his housemaid (Laura Elphinstone) is pregnant by him and gets Engels to say he was the father – a subject for tragedy if you know what happened to the child.

The play is very episodic. There is a duel and a funeral. The play ends with Marx beginning to write Das Kapital.

Young Marx will be broadcast live to 700 UK cinemas and many more worldwide on Thursday 7th December.