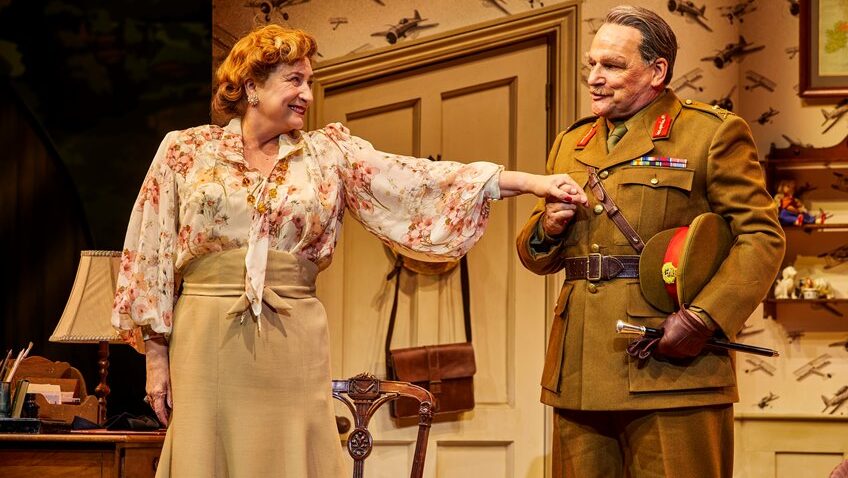 With Jack Absolute Flies Again, the National Theatre attempts to repeat the success they had with Richard Bean’s One Man, Two Guvnors. Having rewritten Goldoni’s The Servant of Two Masters, Bean now, with Oliver Chris, rewrites Richard Brinsley Sheridan’s The Rivals.

Do we really need a new version of The Rivals? Surely, The National Theatre of all theatres should be staging Sheridan’s original play?

The comedy was last seen at The National nearly forty years ago in 1983 in a production by Peter Wood with a brilliant performance by Michael Hordern.

Bean and Chris take the comedy, which premiered in 1774, out of the 18th century and set it during World War II (1940). The production was originally meant to coincide with the 80th anniversary of the Battle of Britain, but Covid put a stop to that.

The script, full of puerile one-liners, double entendres, obscenities and malapropisms, is better than the storyline.

Jack Absolute (Laurie Davidson) is now a pilot in the RAF and his life expectancy is only four weeks. He is in love with Lydia Languish (Natalie Simpson) who is no longer Sheridan’s silly girl, who wants to be treated like a heroine in a romantic novel, but a feminist in the ATA. Lucy (Kerry Howard), her maid, now seems the better role because Lucy is allowed to engage directly with the audience for so much of the time.

Peter Forbes as Jack Absolute’s vile-tempered and not-to-be-thwarted father and Caroline Quentin as Mrs Malaprop (“Queen of the Dictionary”) are the most recognizable Sheridan characters. Quentin has been given loads and loads of new malapropisms.

Jordan Metcalf is physically very funny as jealous Faulkland, a very nervous and sexually inexperienced lover. Bob Acres (James Corrigan), the Irish bumpkin, has been transformed into an Aussie.

Emily Burns’s production uses CCG footage of dog fights twice and also has the whole cast jitterbugging. The major surprise is the serious shift of tone in the coda, which, while it is absolutely true to the wartime context, is, nevertheless, far too serious a climax for all the farce that has gone before; and it jars.

Jack Absolute Flies Again will be broadcast to cinemas across the world on Thursday 5th October, 2022.