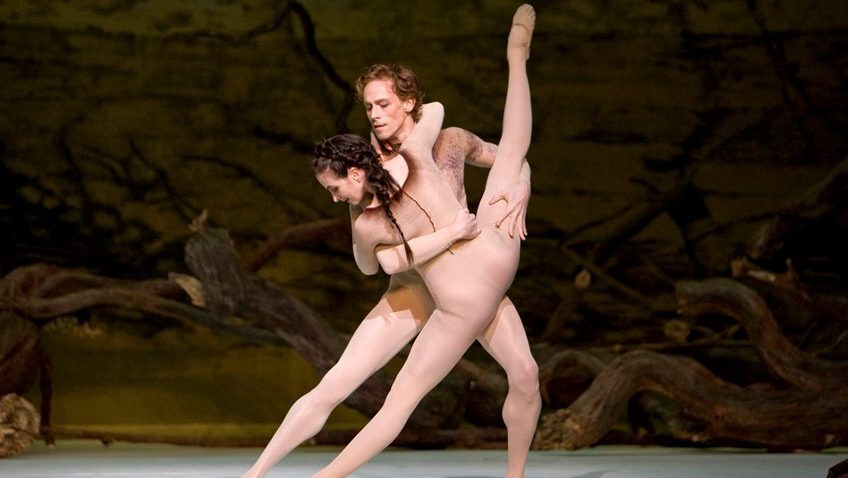 More Opera and Ballet – and it’s on YouTube and it’s for free!

Galatea and Acis are in love. Galatea is a semi-divine nymph. Acis is a simple shepherd who has such a crush on Galatea he has been neglecting his sheep. Polyphemus, a giant, is also in love with Galatea. He is so jealous he kills Acis with a blow to the head with a rock

The story has been told many times. Ovid has inspired many painters, not least Nicolas Poussin and Claude Lorrain. The most famous stage version is a one-act masque by George Frideric Handel which premiered at Cannons, a stately country house, in 1718.

Handel described his first dramatic work in English as a little opera. The libretto is by John Gay, Alexander Pope and John Hughes. Ten years later in 1728 John Gay would go on to write The Beggar’s Opera, the death knell of Italian opera.

Handel’s opera, which opens with a choral celebration of blissful life, was hugely successful and remained popular throughout Handel’s life.

Wayne McGregor’s production for the Royal Opera House in 2009 combines the talents of the Royal Opera and the Royal Ballet. The music, conducted by Christopher Hogwood and played by the Orchestra of the Age of Enlightenment, is gorgeous.

The production is beautifully sung and choreographed. Each singer is shadowed by a dancer who mirrors the emotions he or she is expressing.

The dancers look as if they have danced out of the two bucolic nude paintings by Lucas Cranach the Elder, both called The Golden Age (circa 1530). The dancers, at a distance, look completely naked. In close-up you can see they are wearing very tight body stockings. The men look completely emasculated.

The setting is pastoral and features a ruined temple and sheep, deer, wolf, all stuffed.

Danielle de Niese is a beautiful and radiantly happy Galatea. Lauren Cuthbertson, the dancer who mirrors her, is beautiful, too. Charles Workman is Acis and he is mirrored by Edward Watson. Singers and dancers intertwine. The movement and choreography are sensual

The lovers sing Happy We. The giant is a killjoy. He sings No Joy Will Last.

The chorus give Polyphemus (Matthew Rose) a wonderful build-up to his entrance. You know he is going to get nasty when he is singing Beauty is the Bride and sharpening his large staff. Rape and murder are on the cards

The opera does not end with the death of Acis but with his transformation into a beautiful fountain. As the chorus celebrates Acis’s immortality, so Danielle de Niese dances with Edward Watson (now in the role of shepherd transformed into a god); and to see de Niese dancing so unhibitedly, as if it were second nature, is an unexpectedly magical climax.

All images by Bill Cooper.