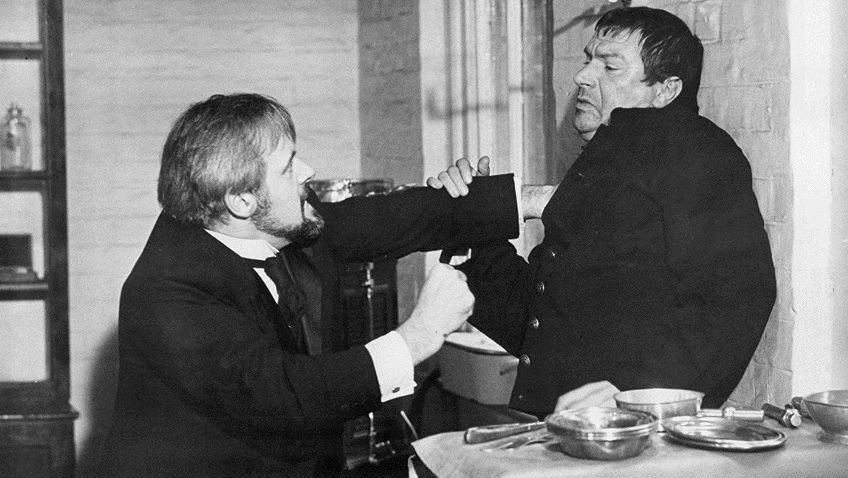 DVDs: The Elephant Man, The Windsors, Nights of Cabira and White Sheik reviewed by Robert Tanitch

THE ELEPHANT MAN (SudioCanal). David Lynch’s disquieting 1980 film is notable for its compassion. In 1886 John Merrick, body and face, hideously deformed was admitted to the London Hospital. Dr Frederick Treves saved him from a life as a fairground freak. John Hurt (with accurate make-up which completely disguised him) gives a deeply moving portrait of a gentle, polite, educated young man who was so grateful for the kindness he was shown. Treves (a beautifully understated performance by Anthony Hopkins) was worried that he too was exploiting Merrick. Freddie Jones and Michael Elphick are two villains out of a Victorian penny dreadful. There are horrific scenes when Merrick is hounded and humiliated by mobs. “I am a man,” he cries, “not an animal!” The film was nominated for 8 Oscars and amazingly did not get any; not even Freddie Francis for his black and white photography. Strongly recommended.

THE WINDSORS Complete Series One – Three (Acorn). The Royal Family nowadays is never off the screen, either seriously as in The Crown series, or farcically as in The Windsors, a sitcom parody. The story-lines are fictional but based on real events, facts and gossip which has been reported in the media and which gives the show its edge. Some of the satire is funny and affectionate. Much of the satire is heavy-handed and downright nasty. The caricatures can be as vicious as the cartoonists were in the 18th century. Some royal members get a rawer deal than others. The actors have been well chosen and there is much to laugh at in all three series.

NIGHTS OF CABIRIA (StudioCanal) won an Oscar for Federico Fellini in 1957 for Best Foreign Film. Cabiria is a prostitute who works in the seedy outskirts of Rome. She’s a born loser with a heart of gold and remains naively optimistic despite every devastating misfortune. She bounces back only to lose yet again. One man throws her into the river (she can’t swim) whilst another man locks her up in a room. A third picks her up in his lorry and dumps her miles from anywhere and a fourth publicly humiliates her. A fifth man robs her of all her savings. Giulietta Masina, Fellini’s muse and wife, won the Best Actress Award at Cannes for her performance.

THE WHITE SHEIK (StudioCanal) is the very first film Federico Fellini directed on his own and dates from 1952. A child-bride goes missing on her honeymoon. She goes in search of an actor, she idolizes, and ends up on a chaotic location shoot when she should have been meeting her husband’s bourgeois provincial family in Rome. Alberto Sordi is the fifth-rate photo cartoon-strip actor, no dream idol, and very effeminate. Leopold Trieste is the blubbing distraught husband and Brunella Bove is the infatuated innocent bride.