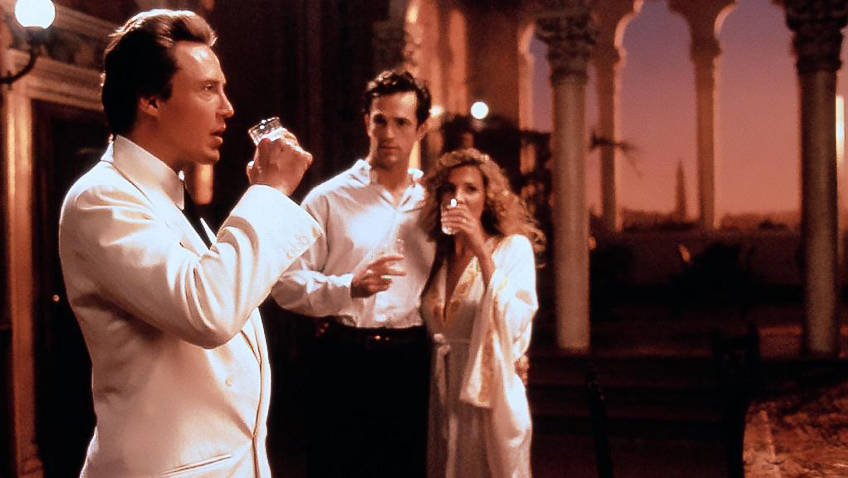 . The setting is Venice. Is the scenario going to be another Don’t Look Now or another Death in Venice? It could be either. Sexual ambiguity and perversion are definitely on the cards. Harold Pinter wrote the screenplay. Two lovers (Rupert Everett and Natasha Richardson), whose love for each other has gone stale, get lost in dark alleyways and fall into the hands of a sinister and sadistic couple (Christopher Walken and Helen Mirren), who live in a magnificent palazzo and invite them to stay the night. The next morning they find their clothes have been taken and they are left stark naked.  Their sex life has a new impetus; but the price they pay is heavy.

(written 1760, published 1796), was banned because of its criticism of the Roman Catholic Church. The ban caused a national furore. It took two years to get it released. The ban made it an instant box-office success. In France in 1757 an illegitimate child (Anna Karina) is forced into a convent against her wishes to pay for the sins of the mother. She has no vocation and no desire to be cloistered for the rest of her life. She rebels and is tortured by the mother superior. She is starved and ostracised. She manages to get a transfer to another kinder convent where lesbianism is rife. The Mother Superior tries to seduce her. She elopes with a priest who attempts to rape her. Remaining very naive to the very last, she finds herself in a high class brothel.

The Eyes of Orson Welles (Dogwoof). This documentary will be of interest to all Orson Wells aficionados. Citizen Kane has regularly topped the list of Best Films by worldwide critics. Mark Cousins has a found a new way to tell the great director’s story. He looks at his drawings, which are housed in Michigan University and connects the drawings to his films (The Magnificent Ambersons, Touch of Evil, The Lady from Shanghai, Kafka The Trial and Chimes at Midnight) and to his stage productions (the voodoo Macbeth and the fascist Julius Caesar). Cousins’ affectionate, whimsical commentary is also a vocal delight.

Eye of the Needle (BFI) is an old-fashioned spy thriller. There is also a totally unbelievable romance going on between the ruthless Nazi spy (Donald Sutherland) and the wife (Kate Nelligan) of a paraplegic, who lost his legs in a car crash on their wedding day. The spy, who poses as an Englishman, has information about D-Day. His is called Needle because he has a habit of killing people by jabbing a stiletto into their rib cages. Sutherland is chillingly lethal; but the film, directed by Richard Marquand, feels so old-fashioned it should have been set during World War 1 not World War 2.

Juliet of the Spirits (Cult Films). This 1965 Federico Fellini film is a psychological study of an unhappy wife, drawing on her childhood experiences and the fantasies going on in her mind. She wants to be loved by her husband but he is having an affair and she is afraid of being abandoned and left alone. She sees magic everywhere. Beautiful, flamboyant, promiscuous women, who are outrageously costumed, create the bordello-like atmosphere. The wife is played by Giulietta Masina, star of La Strada and Fellini’s wife.  This dizzy, erotic andoccasionally tiresome séance is a self-indulgent, surreal, autoerotic circus, and will, I suspect, have feminists up in arms.

The Breadwinner (StudioCanal). This powerful feature by the animation studio Cartoon Salon, founded by director Nora Twomey, was nominated for an Academy Award. The story, based on Deborah Ellis’s novel

for young adults, is set in Afghan in the Taliban era, a time of dire brutality. A brave 11-year-old girl becomes the family’s breadwinner when her father is arrested and sent to prison. To get food for her starving family she has to masquerade as a boy. Women are not allowed to leave their home unless they are accompanied by a male. The girl gets her inspiration and resilience from retelling ancient myths.