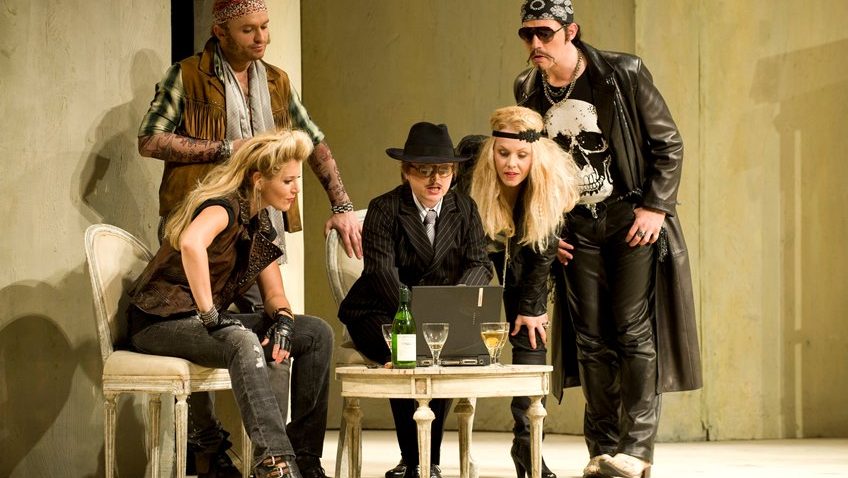 Two young officers boast that their fiancées would never be unfaithful. Their friend, Don Alfonso, an older and wiser man, bets them that they will be just like any other women.

The boys accept the bet, pretend to be called up, and go off to war. They return in disguise to seduce each other’s fiancée.

For much of the 19th century, Mozart’s opera (which had premiered in Vienna in 1790) was thought to be too risqué to be staged and it wasn’t until the 20th century that it regained its popularity.

Jonathan Miller made his Royal Opera House debut as a director in 1995 with his own extremely popular production. The performance ROH is streaming is the 2010 revival conducted by Thomas Hengelbrook.

The production is in modern dress and the singers are dressed by Giorgi Armani. Their props include mobile phones, a laptop and Starbucks coffee. The men disguise themselves as Hells Angels. A CNN television crew arrives for the wedding

The set is extremely bare and looks as if the decorators are in. The sofa is under a dustcover. There are a couple of chairs and a pile of cushions on the floor. There is a long mirror on a stand.

Will the girls succumb? Of course, they will.

Don Alfonso (Thomas Allen on form), who stage-manages the wager, is a realist. He knows women are unfaithful by nature (Così fan tutte, all women are like that) and it is naïve of the young officers, Ferrando (Pavol Breslik) and Guglielmo (Stephane Degout), to expect them to be otherwise

The opera, based on a real-life incident, raises the question whether it is alright for women who are engaged to be married to be having affairs when their fiancés are away on active service?

Despina (a vibrant Rebecca Evans), Don Alfonso’s accomplice, advises Dorabella (Jurgita Adamonytė) and Fiordiligi (Maria Bengtsson) to do exactly what men do all the time and put pleasure above loyalty.

What started off as a joke gets completely out of hand and the girls are utterly humiliated.

What makes Così fan tutte special is that under the farce and frivolity Mozart finds real feeling and heartbreak. The person who suffers most is Fiordoligi and Maria Bengtsson has the most moving aria in the opera.