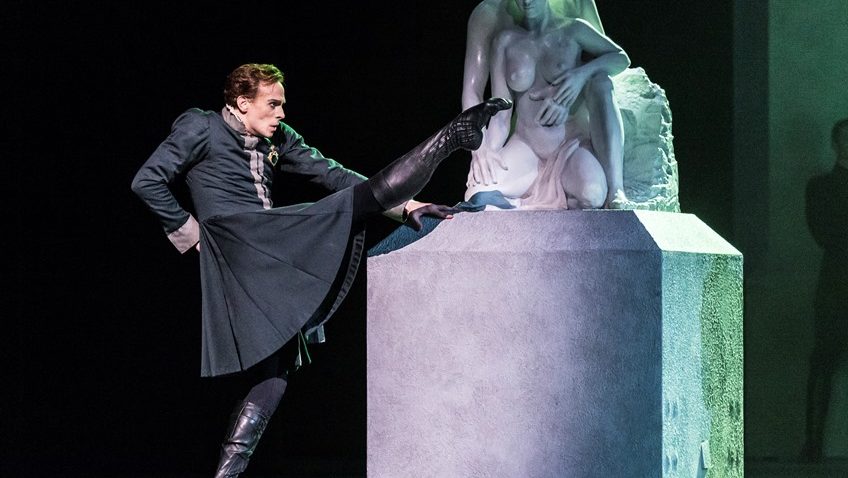 Christopher Wheeldon’s ballet version of Shakespeare The Winter’s Tale, choreographed to music by Joby Talbot for the Royal Ballet, premiered at the Royal Opera House in 2014.

This film version is of that production and that cast. Edward Watson is Leontes. Lauren Cuthbertson is Hermione. Zenaida Yanowsky is Paulina. Federico Bonelli is Polixenes.

Wheeldon immediately establishes the friendship Leontes and Polixines have had since boyhood and then brilliantly solves the problem of Leontes’ mad jealousy seemingly coming out of nowhere.

Wheeldon has the visibly heavily pregnant Hermione feel her unborn child’s kick and invites not only Leontes to touch her bump but also Polixines to do so.

So, whose baby is it? Leontes is convinced his best friend is having an affair with his wife, and that the unborn baby is Polixines’s and not his. His relationship with them both quickly degenerates and he becomes more and more abusive, more and more dangerous.

The Winter’s Tale is notorious for flouting the unities of time and place, jumping 16 years and travelling to another country. The sea voyages are spectacularly created with digital projection on a huge billowing silk.

A major surprise (for those who know their Shakespeare) is there’s no exit pursed by a bear. There is no bear. Antigonus, who saves baby Perdita’s life, is drowned by a tsunami.

Designer Bob Crowley captures the contrast between Sicilia and Bohemia: the dark and cold austerity of the court with its white marble statues gives way to a bright and colourful pastoral scene with its green tree of life.

The second act is an exuberant dance showcase for the corps of peasants and two teenage lovers, the children of Leontes and Polixines. Sarah Lamb’s Perdita looks far more aristocratic than Steven McRae’s Florizel when it should be the other way round. She’s the commoner, a shepherdess. He’s the prince.

From a dramatic viewpoint there is too much divertissement. Wheeldon needs to get back to Sicilia and get on with the story much sooner. The third act does not quite measure up to one of the most magical moments in all Shakespeare, the coming to life of Hermione’s statue.