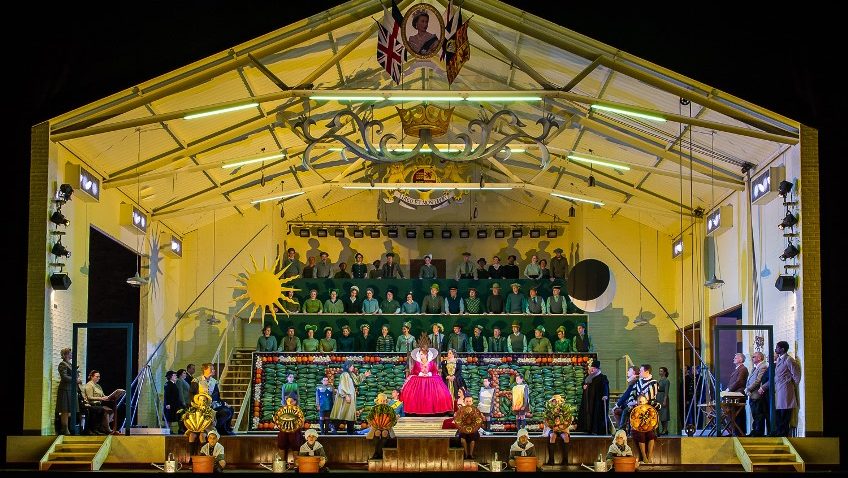 Benjamin Britten wrote Gloriana to celebrate the coronation of Queen Elizabeth II in 1953. He and his librettist William Plomer based the opera on Lytton Strachey’s Elizabeth and Essex A Tragic History.

The Queen, in her declining years, had a tempestuous relationship with Robert Devereux, the 2nd Earl of Essex, thirty-four years her junior, who, fatally ambitious for power, flirted and flattered.

The public and the critics gave the royal gala premiere at the Royal Opera House a lukewarm reception, finding the subject matter too complex and in bad taste. The audience was largely made up of people who wouldn’t normally be going to the opera.

The conceit of Richard Jones’s revival in 2013, which was conducted by Paul Daniel, is that the audience is watching a pageant in a community hall in the regions in 1953 which Queen Elizabeth II is also attending.

The performance is very much in the cardboard theatre manner of the day with brightly coloured costumes such as you might find in a children’s Tudor history picture book.

The stage hands remain visible throughout and the scene changes are an integral part of the staging. Children in short trousers and school uniform carry placards with letters of the alphabet which when held high spell out the location of each scene.

The high spot is the third act when Essex returns from a disastrous campaign in Ireland and bursts into Elizabeth’s bedroom when she is still in dishabille and without her wig, a humiliating scene for them both. Bullock and Spence are excellent at this moment.

There is more drama when Essex is about to be beheaded and his sister (Kate Royal), pleading for his life, overreaches herself and goads the Queen into signing the death warrant

The Queen loved dancing. Bullock bravely dances the Volta in which she is lifted into the air by not one but two gallants.

The masque is badly choreographed and poorly danced; deliberately so, I presume, so as to become a spoof of a tacky municipal performance. The trouble with this approach is that the masque is as boring Essex says it is going to be and, like him, you want to get on with the story.

There is some fine choral singing throughout.

Christopher Wheeldon’s ballet of Shakespeare’s The Winter’s Tale, performed by The Royal Ballet in 2014, can be seen for free on 1 May 2020, 7pm BST on ROH Facebook and YouTube channels.