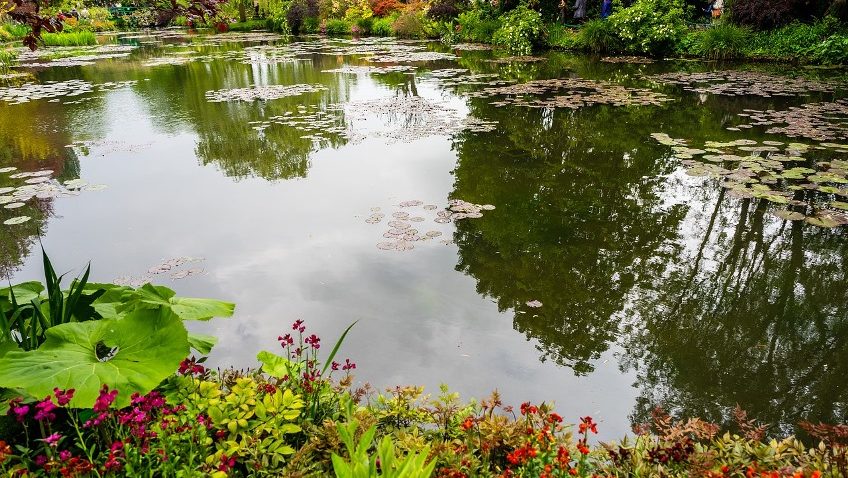 Painting the Modern Garden – Monet to Matisse (Free via Facebook Premiere, on April 27, 2020 at 7PM)

What perfect timing for the re-release of Painting the Modern Garden, Seventh Art Production’s documentary of the blockbuster exhibition that opened at London’s Royal Academy almost exactly four years ago. Stuck at home during the most summerlike April on record with garden centres shut, here is a chance to luxuriate in the gardens that painters designed, planted and painted. This is a must-see film for artists, art lovers, gardeners, horticulturalists, and historians. While the paintings are the chief attraction, we travel to a few of the 19th and 20th century artists’ gardens – for example, the Die Brücke member Emil Nolde’s garden in Seebüll and, of course, Monet’s garden in Giverny – which will, post Covid-19, reopen to the public

While director David Bickerstaff is intent on showing us key paintings in close up, we are also given panoramic sweeps of the gallery space to evoke the exhilarating physical experience of entering the RA’s gorgeous rooms. If we cannot be there in person, the film offers many extras to enhance our understanding of the context of the paintings, including perceptive and fascinating commentary from a variety of experts. Artist Lachlan Goudie laments our tendency to compartmentalise artists, reminding us that Monet was not only a painter, but a sculptor. “Monet was clearly a great sculptor because in his garden he is sculpting nature. He’s making sure there are larger flowers and small flowers; darker tones and lighter tones…”

Tim Marlow, who was, in 2016, the Artistic Director of the RA, also reminds us that there has never been a major exhibition looking at the role of the garden in modern art. “The garden”, he laments, “has been a very under rated site in the development of the evolution of modern art.”

Art historian Tim Richardson continues that thought. “The linkage of art and gardens is interesting and timely, partly because of the low cultural status of gardens in the hierarchy of the arts, which is somewhere down with knitting and embroidery…” But many of the artist-gardeners in this exhibition were interested, if not obsessed by their gardens. First of all, as a subject matter for their own painting, but in some cases (most famously with Monet), the garden becomes an artwork in its own right.

The film begins with breathtaking footage from Monet’s garden in Giverny (as it is today), voiced over with a diary entry from art dealer René Gimpel, one of many art dealers, authors, poets, artists and even politicians, who would be shown around the garden by Monet himself. But that is a flash forward because the exhibition begins in 1873, long before Monet could afford to move to Giverny.

One of many astute curatorial efforts, the RA obtained, and displays side by side, an 1873 painting by Monet of the dahlias in the garden of his rented accommodation in Argenteuil and a painting by Renoir of Monet painting that very garden. Renoir does not show what Monet is painting (he leaves that to our imagination) but, in the words of Dr Clare Willsdon of the University of Glasgow, “it is as though Monet were taking the colours from the garden and transferring them with his brush to the canvas.” Ann Dumas, Curator at the Royal Academy, points out that, “he created his garden as an artist: he saw the blocks of colour that he was planting like pigments in a palette.”

The exhibition is not just Monet and the Impressionists (Pissarro, Caillebotte, Bazille, Van Gogh) – important though these artists are. We are also introduced to lesser known international artists whose contributions are, in many cases, equally impressive. You might know John Singer Sargent and Alfred Parsons, but you will want to book a trip to Madrid to experience the dreamy pink and green enclosed garden designed by painter Joaquin Sorolla. Near-by, we are treated to Sorolla’s enormous portrait of stained-glass designer Louis Comfort Tiffany, painting in his opulent garden on Long Island Sound. Sorolla’s painting is so bright and colourful, sunglasses are recommended. Last year, The National Gallery gave Sorolla his own exhibition and we now know that you can visit his house and garden in Madrid.

Tom Coward, the Head Gardener of William Robinson’s garden at Gravetye Manor (Sussex) talks to us about the influence of Robinson’s books, notably The English Flower Garden and The Wild Garden, in changing the static, formal Victorian gardens into gardens that allowed plants to express themselves in a natural way. Gertrude Jekyll is represented only by a painting of a pair of her boots, but her contribution to garden design was equally great. Regrettably, there is only one painting by a woman artist in the entire show.

The film explains the social and cultural evolution of the private garden, tracing it as a pictorial subject from the Garden of Eden in the Middle Ages, to the baroque era when gardens were associated with a king’s power. The rise of the middle class and numerous horticultural and scientific advances in the 19th century, such as new hybrid flowers, containers to transport plants overseas and greenhouses, facilitated the creation of the private garden.

Europeans believed in the restorative powers of the garden and therefore, as a place to spend time with their family. The German painter Max Liebermann (1847-1935), a founder of the Berlin Secession movement and Germany’s most celebrated painter (until Hitler), studied the latest garden design ideas and even wrote about them. He created an enormous and varied garden at his 1910 villa on the shore of Lake Wannsee. It was confiscated by the Nazi’s in the late 1930s. Earlier in this millennium, and on the basis of Liebermann’s formal pencil design, photos and his paintings, the house and garden were restored and opened to the public.

Gardens also served as outdoor studios, allowing the artist to note the changes of light and weather on the plants. Monet would change his palette depending on the time of day, and if the light were bad on a given day, he would be become depressed and frustrated. When painting outdoors was not practical for Matisse, however, he brought the garden into his studio.

By 1883, Monet had a large family and enough money to rent a house in Giverny, in Normandy. In 1890 he borrowed money from his art dealer to purchase it. The film relates the difficulty he had obtaining planning permission for his lilly pond as the local farmers protested that his exotic plants would poison their cattle. In the exhibition, we are treated to some of the actual correspondence.

Monet once said, “aside from painting and gardening, I’m good for nothing.” After seeing the final two rooms of the exhibition, devoted to Monet’s water lilies, you will see just how good that was. He considered it his patriotic duty to remain in Giverny, during WWI although it was close to the front. He was still painting, though half blind and 86-years-old at the time of his death in 1926.

Dr William Robinson of the Cleveland Museum of Art explains that the impetus for the exhibition was the chance to reunite for the first time since 1926, a triptych of water lilies that was in Monet’s studio until his descendents sold them – sadly, to three separate museums in the USA, including Cleveland’s Museum. Feast your eyes and your souls! Referring to the enormous, almost abstract triptych, painter Lachlan Goudie concludes that during WWI and in its aftermath, Monet had reduced his lily pond to its essence. “It’s just about reflections: patterns of light and colour. He didn’t need a bridge any more or a tree trunk. All he needed were ripples and cascades of light.”