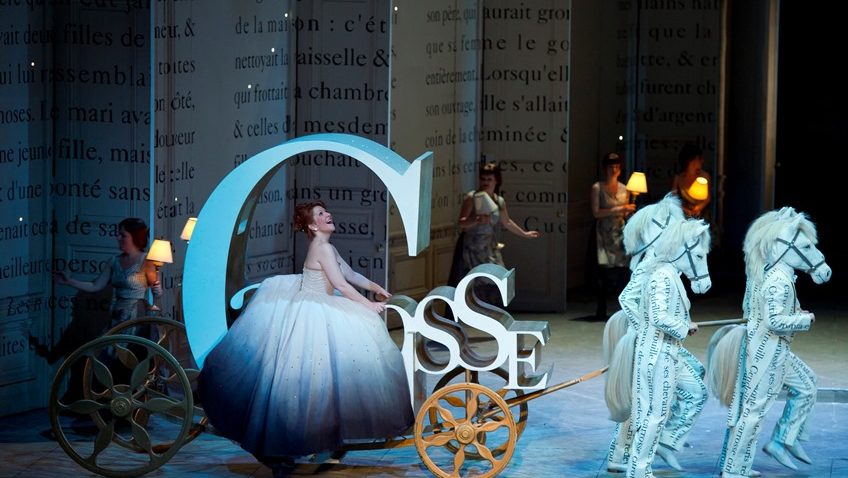 Cinderella has been a popular pantomime ever since its very first spectacular production in 1830 at Drury Lane starring Joseph Grimaldi, the great clown of the Regency era.

Jules Massenet’s Cendrillon which premiered in 1899 was hugely popular in its day, but it has been out of fashion for a long time.

The Royal Opera House staged it for the very first time in 2011 in a production by Laurent Pelly with Joyce DiDonato and Eglise Guiterrey who repeated the performances they had given as Cendrillon and Fairy Godmother in 2006 at Santa Fe Opera in New Mexico.

Pelly’s production gets off to a farcical pantomime start with stepmother, ugly sisters and servants, all grossly caricatured, and behaving in a hyper-active manner in absurd costumes.

Ewa Podles as stepmother is as broad as any pantomime dame in drag and the sisters (Madeleine Pierard and Kai Ruutel) are silly airheads rather than ugly.

There is more pantomime at the ball with a grotesque parade of women. Eager to marry a Prince they advance on him like a swarm of bees

Massenet takes Cendrillon’s solitude and sorrow very seriously. The description of her nightmare flight from the ball on the stroke of midnight is nearer to the Brothers Grimm than Perrault

In Act 4 she goes to sleep and dreams of being in a forest with a magic oak tree, home to the Fairy Godmother. Cendrillon and Charming cannot see each other but they can sing to each other and DiDonarto and Coote sing the opera’s finest duet.

Pelly has changed the location and instead of the forest the dream takes place on urban rooftops among the chimney pots. You half expect Mary Poppins and the chimneysweeps to appear and start singing and tap dancing to A Step in Time.

Eglise Gutierrey’s Fairy Godmother is costumed to look like a fin de siècle madam who runs a high class maison close. Her sylphs are Cinderella lookalikes.

There are some fine duets for Cendrillon and Charming and for Cendrlllon and her father (Jean-Philippe Lafont) but the likelihood of the opera coming back into the regular repertoire is slim.

Andrew Lloyd Webber’s Cinderella is scheduled to open in October 2020.