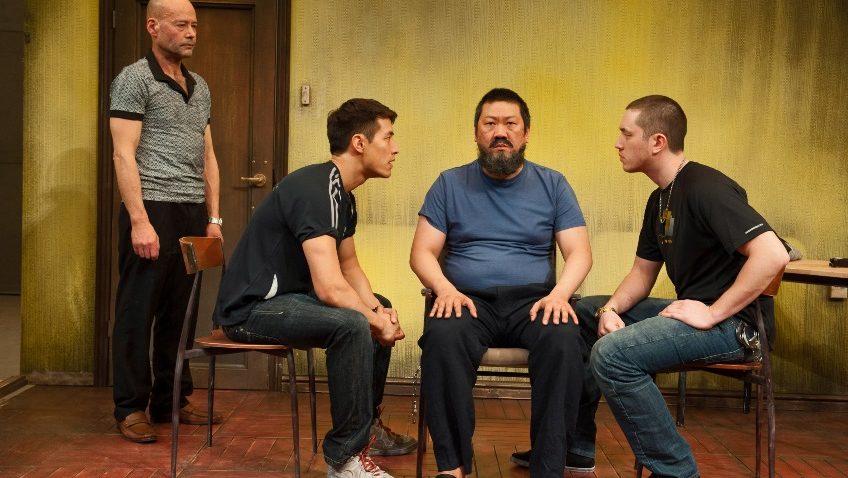 THE ARREST OF AI WEIWEI (YouTube). A Chinese conceptual artist was arrested in 2011 and imprisoned because he had criticised the Chinese’s government’s stand on democracy and human rights. Howard Brenton’s play, an adaptation of Hanging Man, Barnaby Martin’s book about his 81-day ordeal, premiered at Hampstead Theatre in 2014.

James Macdonald sets the play in a crowded public art gallery and gives it an art installation production which is dominated by a huge crate which when opened up reveals the cramped prison cell in which Weiwei was held with two guards. He was interrogated by men who knew nothing about art and thought his art was rubbish and accused him of having grown rich out of conning the public.

The play is a passionate appeal for artists to paint what they like without interference from the government. Benedict Wong is Weiwei. Orion Lee and David Lee Jones are his interrogators. David KS Tse is a high government official who knows Weiwei’s imprisonment is bad propaganda for China.

THE FAMILY WAY (StudioCanal) is based on Bill Naughton’s working-class drama All In Good Time which premiered in 1963 (the year Philip Larkin said sex was invented in Britain). The 1967 film, directed by Roy Boulting, already felt old-fashioned. A young married couple, short of cash, continue to live with the husband’s parents. The sensitive, young man (Hywel Bennett) is unable to consummate his marriage with his mum and dad sleeping in the next room and the walls wafer thin.

His wife (Hayley Mills) is philosophical: “I don’t care if it never happens. What you never have you don’t miss.” His dad (John Mills) is outraged: “What a disgrace. Just suppose it leaked out at the gasworks. I’d never live it down.” Gossiping neighbours make the situation worse. Mills has an excellent scene when he challenges his son to an elbow fight. Marjorie Rhodes repeated the role she had created on stage, the lad’s sensible mum. The film could have done without the pretty technicolour and a bit more Bolton working class gritty realism.

WITNESS FOR THE PROSECUTION (YouTube). Agatha Christie’s courtroom drama, which premiered in 1953 is far superior to the long-running The Mousetrap. A young man is accused of murdering an elderly woman for her money. Can he rely on his German wife to back up his alibi? Can his barrister, a sick man, save him?

There are two versions on YouTube. I prefer the Billy Wilder’s 1958 film with Charles Laughton, Marlene Dietrich and Tyrone Power to the Adam Gibson’s 1982 TV version with Ralph Richardson, Diana Rigg and Beau Bridges. Either way, Christie is at the top of her game and just when you think it’s all over, she pulls the rug from under your feet and has yet another twist.