Home / LIFESTYLE / Off his trolley 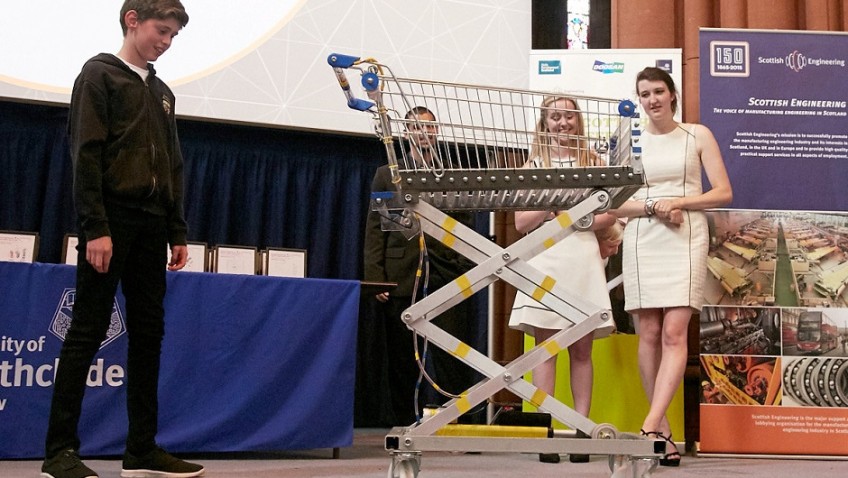 Engineers have developed a robotic shopping trolley for elderly customers based on a drawing by a boy who simply wanted to help his gran.

Aidan McCann, 13, dreamed up a push cart with height adjustment features to help his grandmother Lydia who “isn’t very strong”.

He witnessed how the pint-sized 75-year-old finds it difficult to carry groceries from the shops and perform other physically demanding tasks due to her height.

But Aidan came up with a solution — a trolley that “can change heights so elderly people don’t have to lift their bags very far”.

The primary school pupil scribbled down the idea and it was so good: it won him the top award in a national engineering competition.

And a prototype of Aidan’s “Trolley for the Elderly” has now been unveiled for the first time following a collaboration project with a leading university.

The young inventor said it was an “amazing piece of engineering”.

Aidan said: “My gran has quite weak arms and whenever I help around the house she struggles with weights.

“I thought of something to help her with the shopping.

“When I saw the working trolley for the first time I was amazed. It’s an amazing piece of engineering and it was amazing to see it come to life. I’d love to be an engineer now.

“When my gran seen it, she really loved it. It was designed for her.”

Aidan, who will go on to S2 at Fortrose Academy, Highlands, submitted his idea to a national competition while he was a P7 pupil at Cromarty Primary,

Beside a simple blueprint of the trolley, he wrote: “If I were an engineer in Scotland, I would invent a trolley for the elderly.

“The trolley can change heights so elderly people don’t have to lift their bags of shopping very far.

“I invented this for my gran because she isn’t very strong.”

His design caught the eye of the judges at the Scottish Engineering Special Leaders Award in 2015.

Bosses at engineering giant Doosan Babcock were so impressed with Aidan’s design they selected it as their overall winner.

And a team of final year Mechanical Engineering students from the University of Strathclyde, Glasgow, selected it to build.

The pupil met with up with the group in December and outlined his vision behind the invention and his ideas for the prototype.

And he has now been able to test the working prototype for the first time after it was presented to the world at an awards ceremony.

He said: “It was great to see the prototype for the first time. Engineers always have a solution to a problem. The trolley can help people who struggle with height.

“I want to be a mechanical engineer — work in a car garage or something like that. That’s my dream.”

Aidan’s grandmother, Mrs Lydia Webster, 76, a retired social care worker with the Church of Scotland, said was was proud of her grandson.

She said: “Aidan’s a good boy.

“He was helping me with jobs that I couldn’t do because I’m just 4ft 11in tall.

“Then he came up with an idea for the trolley. When he was thinking it up he said ‘I got the idea from you gran’.

“I was quite proud of him, designing something like that. He always says he wants to be an engineer. 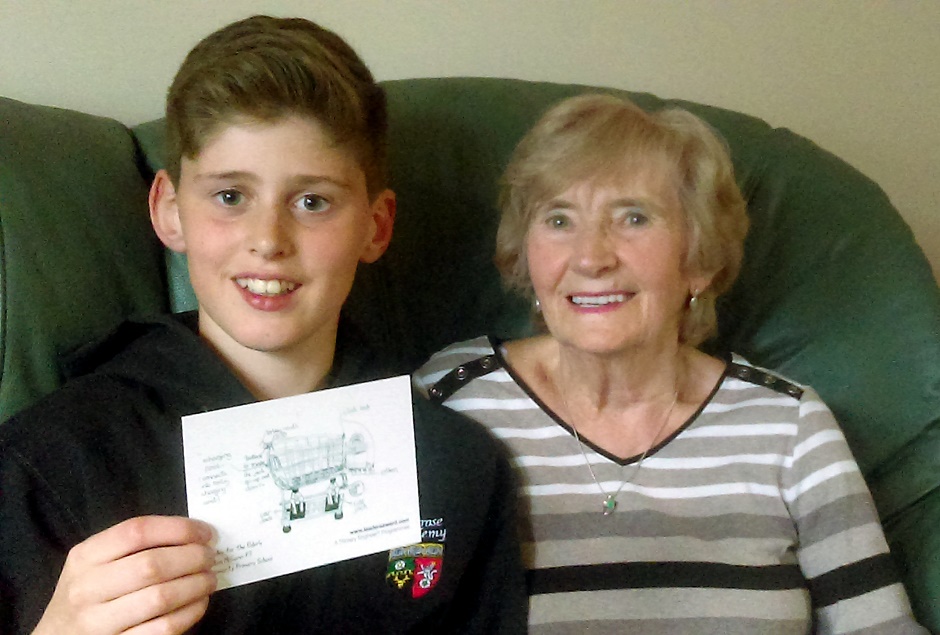 Aidan McCann with his grandmother Lydia. Engineers have developed a robotic shopping trolley for elderly customers based on a drawing by Aidan McCann, 13. who simply wanted to help his gran Lydia.

“It’s such a good idea. You press the button and it goes up or down, depending on your height. I think it could be good for people with disabilities.”

Users can make the trolley go up and down by the flick of a switch.

An adjustable flap at the front of the basket and rolls at it’s base enable the shopping to be easily pushed out of the cart.

Dr Andrew McLaren, Vice Dean Academic at Strathclyde’s Faculty of Engineering, who supervised the project, said: “This project was great experience for the students and we were all delighted to be able to help Aidan turn his imaginative work into reality.”

“It’s one of these inventions where you think — ‘It’s dead simple. Why has no one thought of it before.’

“I’m sure it will benefit a lot of people out there.”

And Aidan’s mum, Ms Helen Webster, 49, a teacher, added: “It was really fantastic to see the whole design process right through from start to finish. It’s been really good.

“I’m so proud of him. I said ‘get that in your personal statement’.”