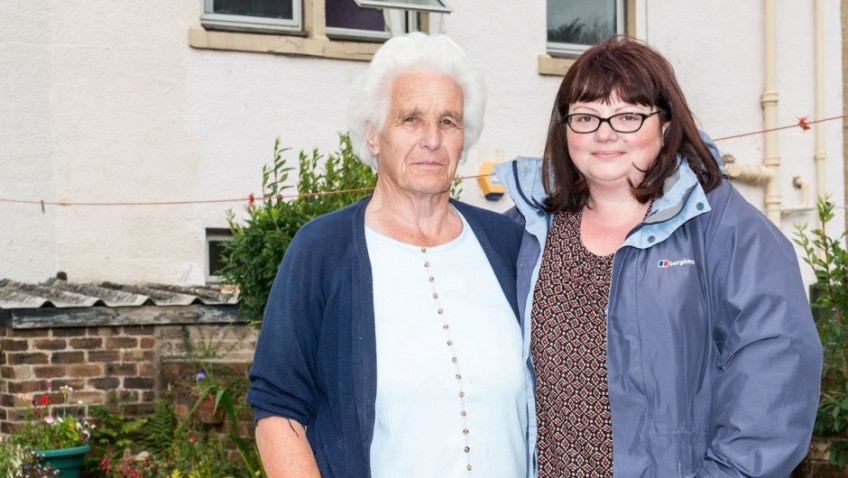 A heroic great-grandmother was hailed a heroine today for saving a frail pensioner from her blazing home.

Mary Pringle, 83, from Musselburgh, East Lothian, was gardening when she noticed cries for help and thick smoke coming from her neighbour’s home on Wednesday morning.

The quick-thinking pensioner ran to the front of the semi-detached house where she desperately tried to persuade terrified Agnes Hunter, 84, to open up her door.

The housebound pensioner was in shock and hesitant to leave the property, but Mary managed to lead her to safety with the help of fellow neighbour Seonaid McAlpine (corr), 43.

Mary said: “I was in the back garden and saw smoke coming out of the back door. It was billowing out.  It was a terrible fire.

“I then heard a little voice screaming ‘fire, fire’ and took to my heels and ran round the front.

“I hammered on the door and shouted for her to come out, but she was clinging on to the rail near the radiator.

“I was trying to get her out of the house but she didn’t want to leave. She did not want to come out. I think it was shock.”

Mary and Seonaid managed to put Agnes into a wheelchair and led her to safety “in the nick of time”, just seconds before fire crews arrived after 11.30am.

But the pensioner refused to leave the scene completely and watched as her house was gutted by the blaze, which had been sparked by a cooker.

Following the fire drama, Agnes and her daughter, Anna Scott, 56, from Musselburgh, hailed the quick-thinking heroes who came in the “nick of time”.

Agnes said: “It was horrible, it was just so quick. I’m very good with the cooker, but it’s the last time I’ll ever use it.”

Anna added: “Mum had burnt boiled eggs before, so I didn’t think it would be too serious – but when I got there I saw it was.

“It’s pretty bad and has affected most of the house.

“Mary and Seonaid are very good neighbours – if it was not for them, mum might not still be here.”

Mary said: “It’s quite a close-knit community and I’m just glad we could help. I’m feeling the effects of it today, cause I didn’t sleep last night.

“I was looking forward to a quiet week, but it didn’t turn out to be like that. When you get to this age you take things in your stride. At least we got away lightly.”