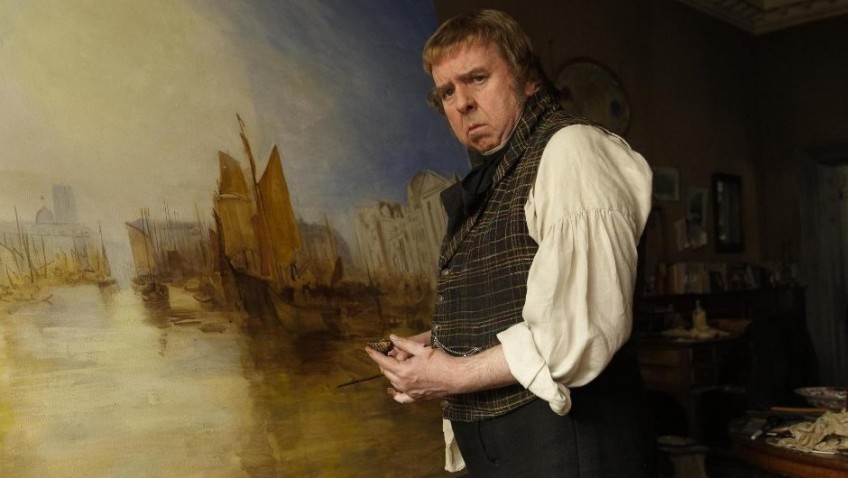 Timothy Spall’s performance as Turner is something special Mr TURNER (Entertainment One). Mike Leigh’s improvised and poetic portrait of a great artist (1795-1855) often looks like paintings by Turner. The film covers the last decades of his life and his relationships with family, housekeeper and Margate landlady. The high spot is a sequence at the Royal Academy Exhibition where Turner is surrounded by famous artists of the day.

If you know what Turner looked like only through his handsome self-portrait when he was 24, then Timothy Spall’s eccentric, grunting, growling, inarticulate gargoyle comes as quite a shock.

The performance, however, is a magnificent in-depth character study of genius. The young John Ruskin is caricatured as a pompous ass. SPRING IN A SMALL TOWN (BFI). Fei Mu’s subtly tragic marital drama, which premiered in 1948, is considered by the Chinese to be one of China’s best films. It tells of a sterile marriage interrupted by the unexpected visit of an old school friend of the husband who happens to have been in love with his wife when they were youngsters.

The would-be lovers suppress their emotions. They do not even kiss. We Wei is the dutiful wife. Shi Yu is the husband with a dicky heart. Li Wei is the decent friend. The actors underplay and the sad story is all the more potent for it. LIFE ITSELF (Dogwoof). Roger Ebert (1942-2013) was the first American film critic to win a Pulitzer Prize and the first to have a star on the Hollywood Walk of Fame.

He made his name on The Chicago Sun-Times. He became even more famous on television in a double act with Gen Siskel where they fought like little boys.

Ebert suffered from cancer of the throat and jaw and was not able to eat, drink or speak. He had a wonderfully devoted wife. Bravely, he continued writing a blog.  Steve James’s documentary is a fine and moving tribute which will appeal not just to cinephiles. HE RAN ALL THE WAY (Simply Medium) is a small budget film, dating from 1951 and starring John Garfield, one of the great film noir actors.  An unlikeable small-time criminal kills a policeman. On the run he picks up a nice girl (Shelley Winters) and she takes him home where he terrorizes her family. Will she help him to escape the police?

The story is unconvincing but Garfield (in his last film, he died of a heart attack a year later at 39) and his director John Berry, and his photographer, the great James Wong Howe, and the exciting score is by Franz Waxman, keep you watching. Gladys George is excellent in a cameo role as the mother. BLACKWOOD (Wild Card) is a British horror movie. College professor (Ed Stoppard), his wife and young child move into a haunted house deep in the country.

He has just suffered a nervous breakdown. He starts seeing things.

His paranoia is increased when confronted by a creepy ex-soldier and the creepiest vicar you ever did see. Director Adam Wimpenny goes completely berserk in the final reel. Stoppard (son of Tom) is too cerebral an actor for this caper.

To buy your copy of any of these DVDs at discounted prices click on the link below: