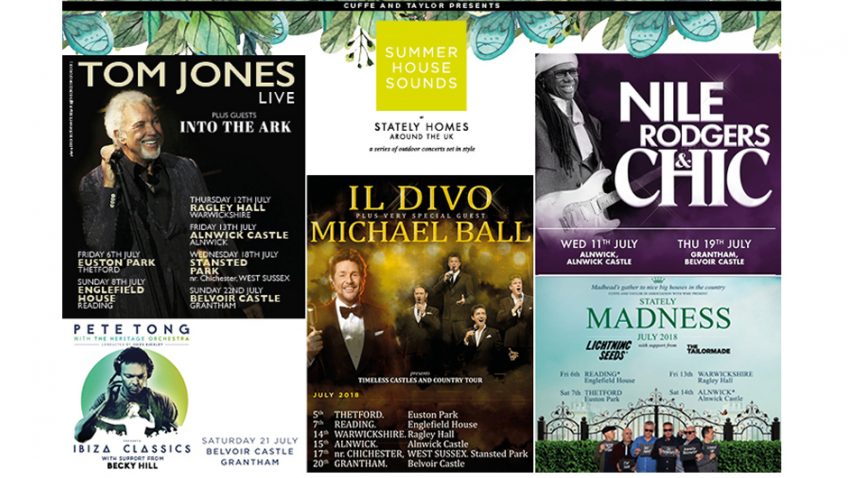 A new series of summer concerts by some of the most famous names in music are set for this summer in some amazing outdoor locations. With artisan food, craft gins, real ale and so much more, there’s no better way to spend a mid-summer’s eve!

We have a fantastic 2 for 1 offer on all tickets!

Tom Jones has been a firm favourite since the 1960s and is arguably just as popular now as he was when The Green, Green, Grass of Home topped the charts. An acclaimed live performer, he has gone from strength to strength in recent years and collaborations with Jules Holland, Robbie Williams and Wycliffe Jean proved hugely successful. At 74 and after 50 years in the business, Tom achieved some of his best accolades for his two most recent albums, Spirit in The Room and Praise & Blame.

Il Divo – American tenor David Miller, popular French singer Sébastien Izambard, Swiss tenor Urs Buhler, and Spanish baritone Carlos Marin – have made classical songs popular with old and young alike. Using their fabulous voices they put a new twist on pop songs and old favourites. For these performances, the hugely popular Michael Ball will join them on stage. With their collective exceptional voices, they bring a unique style to some of the best-known songs.

Nile Rogers is world famous as a collaborator, producer, song writer and performer, and as the front man of band CHIC. Formed in 1977, CHIC had a string of classic hits such as Le Freak and Everybody Dance and since then Nile has had a prolific and varied collaborative career with many of the top names in the music industry.

Madness are firmly established as one of the UK’s favourite bands with hits like Baggy Trousers, It Must Be Love and House of Fun. As popular now as they were in the 1970s and 1980s, their concerts always attract a loyal following and bring a huge amount of joy to the stage as well as their incredible sound.

Pete Tong brings club music and classical instrumentation together for an unforgettable evening. Having put together this incredible dance party that features the 60-piece Heritage Orchestra, conductor Jules Buckley, lots of synths and special guests singers. Not to be missed!

To book your tickets for any of these amazing concerts and to get this great 2 for 1 offer, please visit: https://www.ticketmaster.co.uk/promo/yv0d0p using the code ‘sugar’