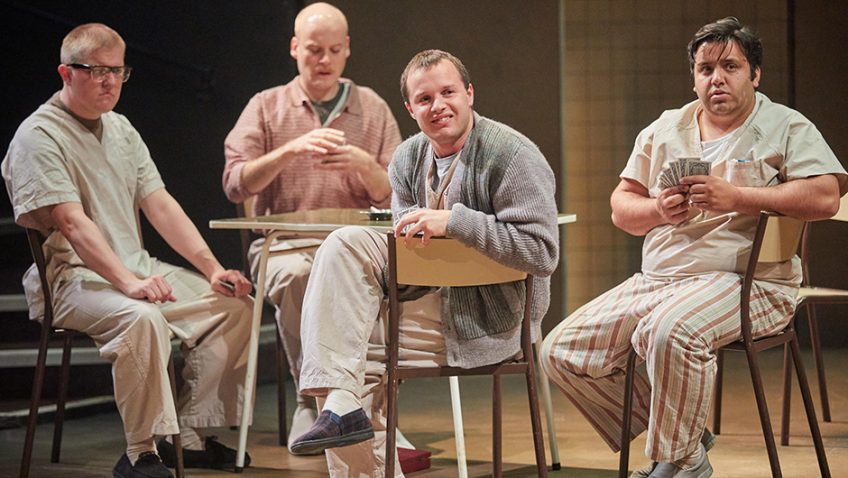 Eileen Caiger Gray reviews One Flew Over The Cuckoo’s Nest at the Crucible, Sheffield (June 12th 2018)

One Flew Over The Cuckoo’s Nest first took off in 1962 as a massively successful first novel by Ken Kesey. In 1963 Kirk Douglas starred in Dale Wasserman’s stage version, though Wasserman was thoroughly dismayed at the manglings and distortions his play was going through. This Crucible production, as in previous revivals since then, sticks with the original text.

Randle P. McMurphy, a criminal who opts to serve time categorised as a psychopath on a psychiatric ward to avoid a stint of hard labour, sprang vividly to life in the multi-awarding 1975 film with Jack Nicholson. From day one, McMurphy encourages his institutionalised fellow patients to rebel against the rigid straitjacket of unthinking conformity and repression imposed on them by the brute force and power of a system that’s irrational, unjust and damaging. In denying them freedom of expression and the right to be non-homogenous individuals with their own opinions the institution is downright wrong – and so is society. Though set in the 1950-60s, the play’s sentiments have no less relevance all these decades later in various contexts. 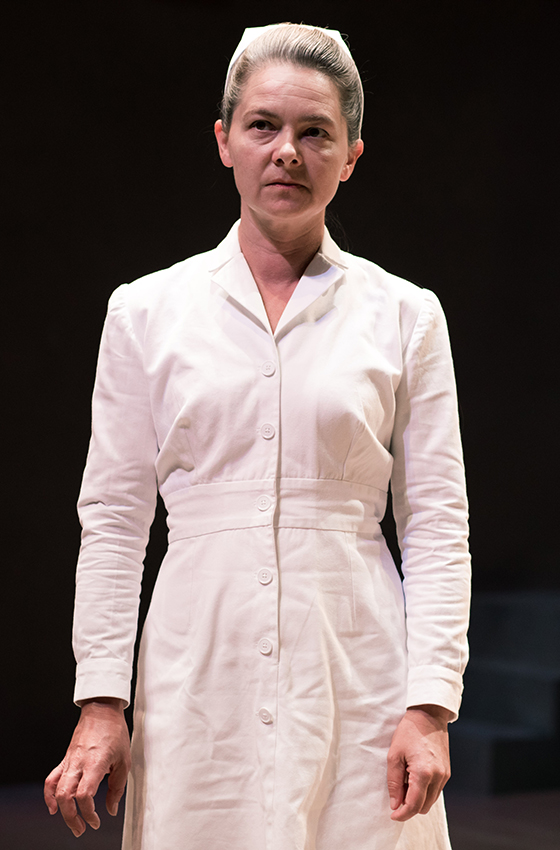 Jenny Livsey in One Flew Over The Cuckoo’s Nest

With a lot less ongoing humour than the film, the play is pretty dark. Onstage, the ward is aptly set as a big, bland, empty, impersonal space with grey doors and a few old chairs. Boxed off to one side is the nurses’ semi-transparent ground-floor station with its monitors and controls. On the floor above is the doctor’s office where the energetic comings and eye-popping goings-on of doctor and nurses distract many a gaze away from the main action at times! The constant muzak the patients’ minds are subjected to, though, is thankfully quiet enough not to drive us all insane, though the soundscape of sustained chords, wailing notes and drum beats that ramp up tension possibly goes a bit OTT during the electro-convulsive therapy, its deafening thrum accompanied by lengthy, blinding light flashes.

Played engagingly by Jeremy Proulx is Chief Bromden, a big man tormented by the fact that he never feels big enough, but as he alternates between shuffling deaf-mute mode and eloquent, spot-lit narrator, it gradually dawns on him he is a big man after all. Instead of remaining, like his tribe, victim of the mighty combine harvester or victim in the cuckoo ‘factory’, he becomes, himself, an unstoppable force. His fellow dehumanised patients likewise come to life as strongly credible characters. Misfits in society they may be, yet are they really as insane as they’re being led to believe? The painful shyness and crippling nervous anxieties of poor Billy Babbit are made very real by Arthur Hughes, while Jack Tarlton gives dignity to the repressed closet homosexual Harding, and Andrew Dennis lumbers wonderfully as crucified, lobotomised Ruckley.

It’s the main characters who must carry the story, of course: the man who violates women and the woman who emasculates men. Unfortunately, Lucy Black, originally cast as ex-army medic, Nurse Ratchett, is injured, and step-in substitute Jenny Livsey was working from the script at times. Nevertheless, she’s brisk and frosty-faced enough, and will probably grow that bit meaner, colder, more forceful, assertive, odious and formidable once she ditches the folder. Her staff, too, might toughen up a tad as befits the era. As main man, rapist McMurphy, wiry Joel Gillman, in a much manipulated woolly hat, is more than halfway there. It’s true he doesn’t need us to like him, but if he could pour more confidence into his wild, subversive cockiness and deploy a freer use of cheeky chutzpah, he might better demonstrate the irresistible charisma that draws the men to him so completely that they’re willing to join his rebellion to stand up for their rights, and even ultimately to remember him with affection. 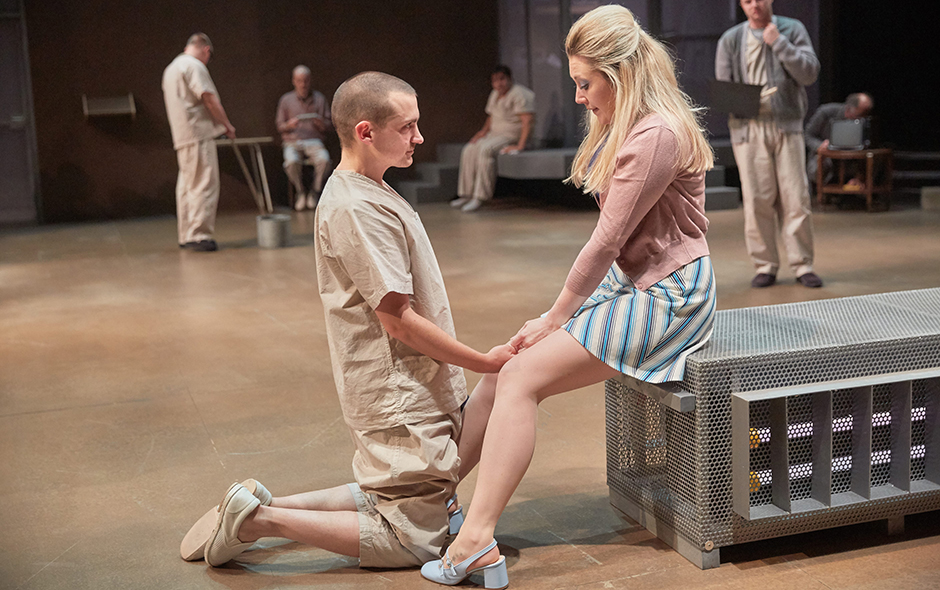 Overall there’s a certain smudgy feel in the interactions of the main characters, and the final escape of the Chief lacks sufficient impact. But, though the script’s a slow burn through Act I, we gradually engage with the characters, and once the action ignites in Act II, we do feel for them, especially for poor Billy.

The show runs until June 23rd