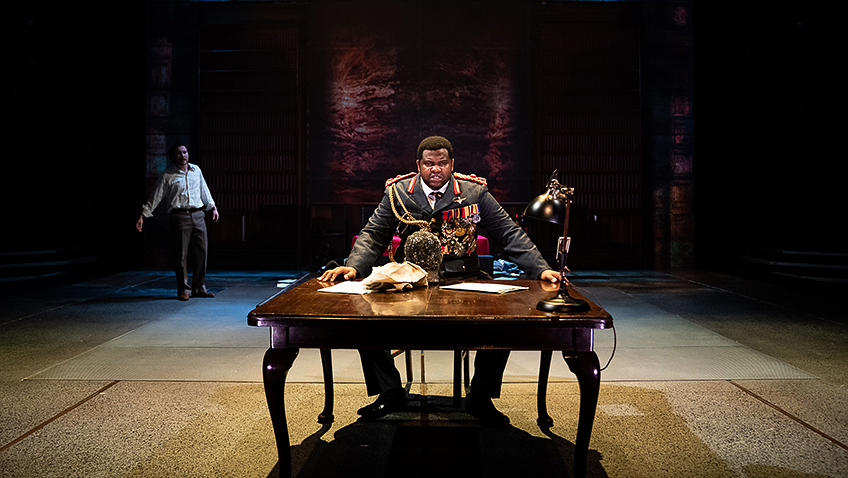 A slice of terrible history, interwoven with intriguing fiction, is brought brilliantly to life

In Steve Waters’ new stage adaptation of Giles Foden’s 1998 award-winning novel The Last King of Scotland, Tobi Bamtefa is truly, truly magnificent as Ugandan despot president, Idi Amin. He is, in every sense, a big man, his lumbering, boxer body and all-powerful ego dominating the stage whether in military uniform, heavy with medals, in tartan kilt with full regalia or in flimsy gown. Bamtefa wonderfully embodies the relentless tyrant, the great manipulator and destroyer of people and truths. A narcissistic megalomaniac without trace of conscience, he’s a man who endows himself with many fanciful titles, a man even ridiculously eager to be the first black man on the moon; he’s the affable, humorous clown who promises to make Uganda great again for Ugandans and who, next moment, instigates the cruellest, most brutal, bloody atrocities imaginable. Bamtefa is scarily convincing: we hate him yet we love him. That’s the dichotomy his doctor has, too. 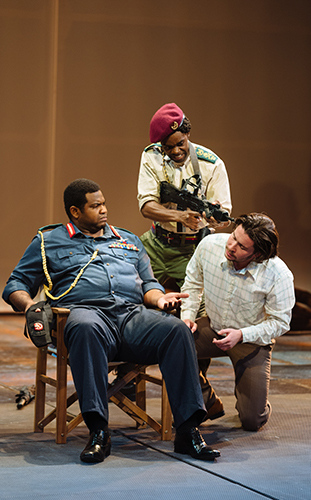 Tobi Bamtefa, Rich Kinsiona and Daniel Portman in The Last King of Scotland

Though based around true historical events and characters, the storyline of the book, the consequent 2006 film and this play, is woven around fictional doctor Nicholas Garrigan, a young Scot who arrives with naive, good intentions on a mission to help the poor and sick of Uganda. Swept up by events, he becomes personal physician and confidant to new leader Amin, after which it grows ever more apparent that it’s the road to Hell that’s paved by his good intentions.

Daniel Portman’s Dr Garrigan, eager and hopeful at the outset, a chap who sees only upsides, is all too easily flattered and taken in by Amin’s charm and power. But as fear escalates and realisation dawns, all he can do is cringe and snivel like a helpless coward. For the audience, as for Garrigan, the question is: is he, in fact, complicit in Amin’s atrocities? All it takes is for one good man to do nothing, they say. As a medic he vows above all to “do no harm”. Sticking strictly to his ethics, he refuses to help the tyrant’s (soon to be divorced and beheaded) wife with an abortion in spite of her desperate pleas, and refuses, too, to administer, at the request of the British Foreign Office, some lethal dose to the psychopathic President, which could stop his reign of terror. Yet this thug who would willingly kill him in an instant is also his friend. Garrigan does nothing.

As Amin’s doomed wife, Kay, a key character in helping reveal just what her husband is and where Garrigan stands, Akuc Bol is a wonderfully vibrant presence (until despatched.)

A full-circle framework has the play start and end with Garrigan being confronted by other political powers that pull secret strings (ours). Light-hearted humour, singing and dancing in Act One reflect an optimism in Uganda for good times to come following the coup that ousted Obote as relationships evolve and the dark side of Amin grows darker. Act Two, like Amin’s behaviour, grows heavier and darker still until the horrifying reality of murders and torture is brought home very graphically onstage – infinitely cruel, bloody, grotesque and grisly, and taking place even within the President’s own palace. 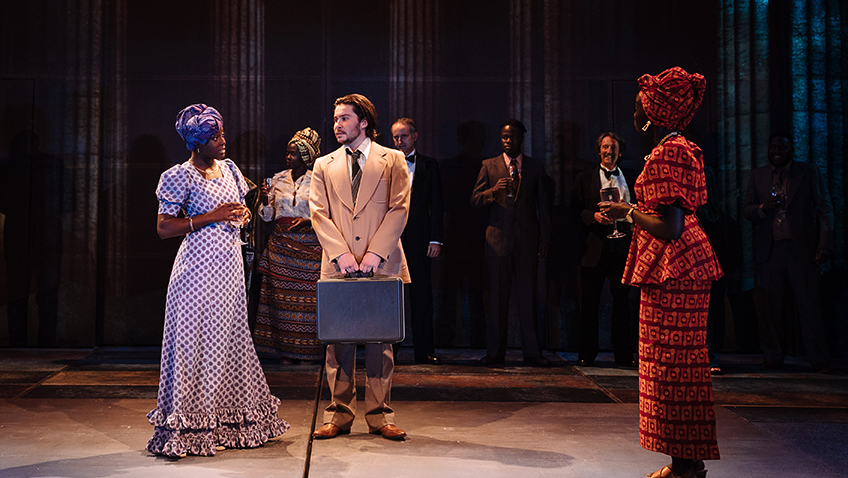 Joyce Omotola, Daniel Portman and Akuc Bol in The Last King of Scotland

Though the play centres largely on dialogue, the stage is frequently busy. Scenes travel from airport to bar, to Ambassador’s party or old Colonial Foreign Office, to the home of Amin’s lively wives or to the church where wife three will be wed, while the palatial bedchamber emerges many times through sliding doors at the back, an entire war being symbolically raged on the president’s bed by two soldiers. At intervals, reporters and photographers amass for photo-shoots and TV news’ reports which play simultaneously on overhead screens, while further clips and projections play across the back wall. Music and sound, used subtly, and changing landscapes of beautiful lighting effects from Sally Ferguson enhance the atmosphere throughout.

Focusing on the psychology of deluded, cruel men of power and those deluded by them, on the manipulators and those they use and manipulate, on the deceivers and those who are, sometimes willingly, deceived, and on those who act and those who fail to act, the play brings under the spotlight humans as they have always been and still are. We may say repeatedly that lessons will be learned, yet again and again “the dead are still dead and the tortured still tortured by their dreams.” The Last King of Scotland is as relevant today as it’s/he’s ever been, and this slice of terrible history, interwoven with intriguing fiction, is brought brilliantly to life in this production.

The play runs until Oct 19th.