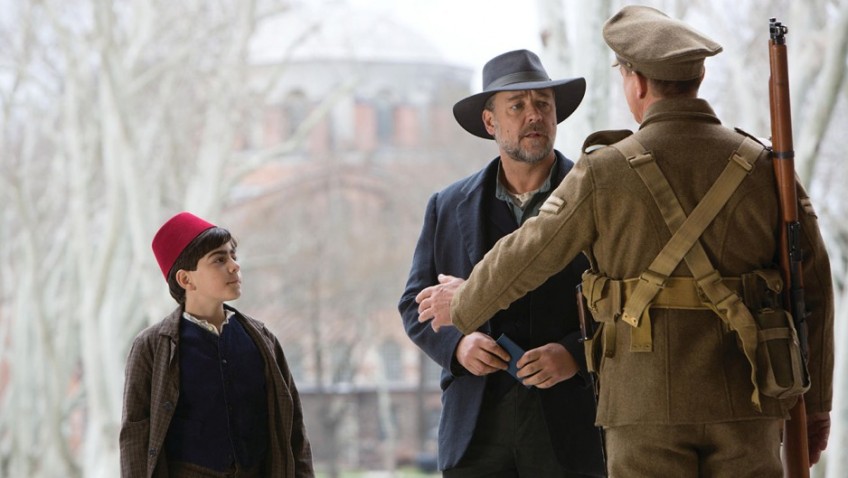 THE WATER DIVINER (Entertainment One). Three Australian brothers are killed in Gallipoli in 1915. When the war World has ended, their father goes to Turkey to find their graves and bring their bodies home. The story is inspired by fact; but Russell Crowe, in his directorial debut, adds fiction, a love interest with a Turkish widow (Olga Kurylenko) and her cute little boy. He also turns the bereaved father into an unlikely action hero. The film, sensitive to casualties on both sides, is at its most interesting when the father is being thwarted by British and Turkish  bureaucracy and in the scenes with a sympathetically drawn Turkish major (Yilmaz Erdogan) who is accused of having killed Australian casualties.

THE SABOTEURS (Arrow). Norwegian TV mini-series is a World War 2 drama in four languages. German scientist Werner Heisenberg is developing a nuclear bomb which could be capable of destroying the whole of London. The factory which supplies the heavy water is in the Norwegian mountains. The allies determine to sabotage the plant. The saboteurs are trained in the UK. The story has been told before in the 1965 Heroes of Telemark. This is much more sober, low-key, less gung-ho version and one which does touch briefly on the moral dilemma of bombing a ferryboat carrying the water when it is full of civilians. The cast is headed by Epen Klouman Hoiner, Christoper Bach and Pip Torrens.

THE BATTLE FOR WARSAW (Kaleidoscope) is a Polish tribute to the Polish boy scouts who fought alongside the Home Army during World War 2. Their amateurish sabotage acts led to instant reprisals by the Nazis who rounded up civilians in the street and massacred them. Robert Glinski’s film (based on a cult 1943 novel by Alexander Kaminski) never rises above a Boys’ Own adventure story level  and doesn’t have the gritty realism of, for instance, Andrzej Wajda’s War Trilogy. You are always very conscious of young actors (led by Marcel Sabat) playacting at being at war. It never feels like the real thing. The film spends too much time watching one of the boys (Tomasz Zietel) being tortured.