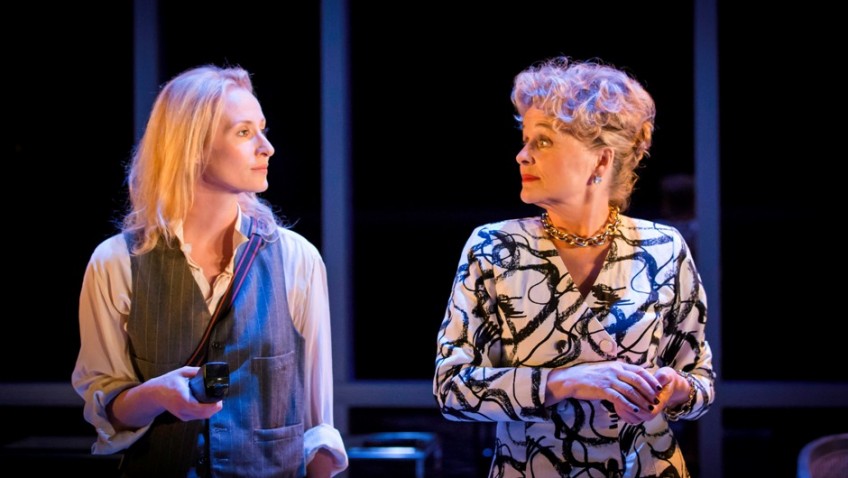 Abi Morgan is a prolific playwright and screenwriter, author of The Iron Lady, Shame and The Hour.

Splendour, which premiered at Edinburgh in 2000 and is now getting a handsome revival by Robert Hastie, is not nearly so accessible.

A brutal dictatorship in Eastern Europe is on the point of collapse; the gunfire of civil war can be heard. A photojournalist arrives to photograph the President. He is not at his palatial palace. But his wife is. She (with her huge collection of shoes) is in the Imelda Marcos mould.

Peter McKintosh’s set, with its huge window from floor to ceiling, its golden chandelier and its marble floor, looks opulent. The crushed glass which surrounds its rim is symbolic of the destruction about to come

Apart from the President’s wife (Sinead Cusack) and the photographer (Genevieve O’Reilly), there is a translator, a singularly unpleasant young woman (Zawe Ashton), who constantly mistranslates and is given to thieving anything she fancies in the room.

There is also the President’s wife’s best and longest friend (Michele Fairley). They have known and despised each other for 35 years.

Morgan does not make it easy. The dialogue, edgy and hostile, is very fragmentary and liable to go back on itself and repeat what has already been said from a different perspective.

The four women voice their inner thoughts either in monologues or brittle asides. The actors are totally confident and at ease with the play’s complex structure. The dialogue cannot have been easy to learn. It is certainly taxing to listen to and audiences will find they have to listen hard.

Hastie’s production is notable for Sinead Cusack’s superb and utterly convincing performance as a once-powerful now vulnerable woman, facing death and knowing she will soon be history, her picture before-and-after, flashed round the world.