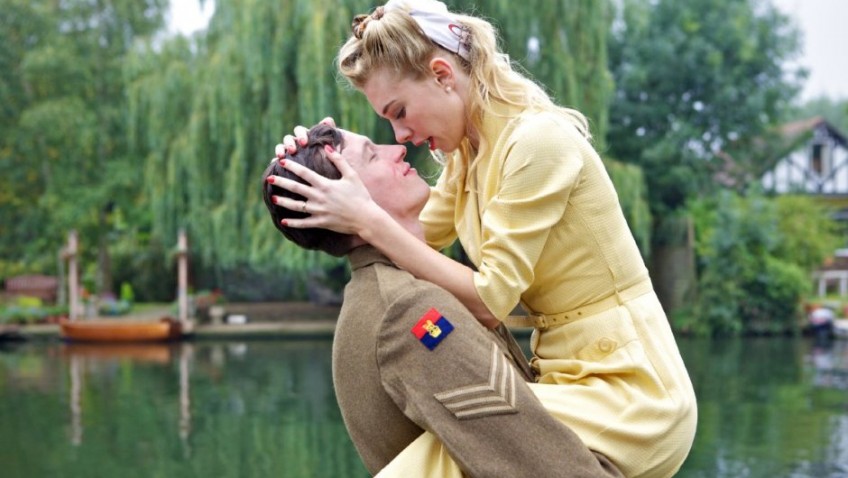 QUEEN AND COUNTRY (Artificial Eye) is a belated sequel to John Boorman’s autobiographical and nostalgic Hope and Glory (1987). He looks back to the time when he was doing his National Service in the early 1950s and remembers the first time he had sex and the pranks (very immature) his best mate played when he stole the regimental clock. He rebels against the bullying authority of the old guard (led by David Thewlis and Richard E Grant) who rigidly stick to the rule book. Caleb Landry Jones as best mate does so much acting that it becomes very off-putting. Callum Turner as Boorman’s alter ego is not quite ready to be playing a leading role in his film debut and he does too little acting; he is good-looking and bland.

THE MAGGIE (StudioCanal). Alexander Mackendrick directs this modest and much under-rated 1954 Ealing Comedy, a Scottish companion piece to Whisky Galore, and filmed on location at Islay. The Maggie is a puffer, a small cargo boat, falling apart, and no longer seaworthy.  An American businessman’s English agent (Hubert Gregg, very English) is conned into using it to carry some valuable cargo. William Rose’s script is a battle of wits between the hard-hearted businessman (Paul Douglas) and the wily skipper (Alex Mackenzie, excellent), a likeable, canny, dishonest rogue, who always wins. Tommy Kearins plays “the wee boy” who holds the moral centre.

EYES WITHOUT A FACE (BFI). A superior French horror movie, directed by Georges Franju and photographed by Eugene Schuftan in 1959, might appeal, because of its austere and poetic beauty, to cinemagoers who don’t normally like the horror genre. The daughter (Edith Scob) of a cosmetic surgeon (Pierre Brasseur) suffers terrible injuries in a car crash. He decides to get her a new face. His mistress (Alida Valli) kidnaps beautiful girls for their faces. The transplants (not for the faint-hearted) don’t work. Scob’s icy mask is an image you are unlikely to forget. So, too, is the final scene when she lets the howling dogs free to take their revenge for the suffering they have also endured.

MAGICIAN (BFI) is a documentary by Chuck Workman on the astonishing life and work of Orson Welles. The boy wonder began in theatre (with a voodoo Macbeth) and radio (in which he famously panicked a whole nation who took his American broadcast of The War of the Worlds for real. Hollywood quickly called. But after Citizen Kane (regularly voted by the film critics the world over as the best movie ever) the film industry didn’t know what to with him. The guys with money didn’t trust him. He was a financial disaster. He had to blaze his own unique and often unfinished trail. There are tantalising clips from The Lady from Shanghai (notable for the mirror sequence), Touch of Evil and Kafka’s Trial. His films have been an inspiration to so many directors ever since.

AROUND THE WORLD WITH ORSON WELLES (BFI). ITV commissioned Welles, a man of the world, not a country, to write, direct and present 26 travelogues in the 1950s. He made six, visiting Basque twice, Berlin, Paris, London and Madrid. My style, he said, is larger than life. The sorties include a bull fight (which caused considerable controversy), a murder investigation and an interview by Bernard Levin from which he emerged the winner. He said that he enjoyed working on radio most and that theatre and opera were dead. He also admitted he was too easily impressed by bad notices, so he did not read reviews and articles on himself. Had he gone into politics, he would have been a left-wing Liberal Democrat senator.