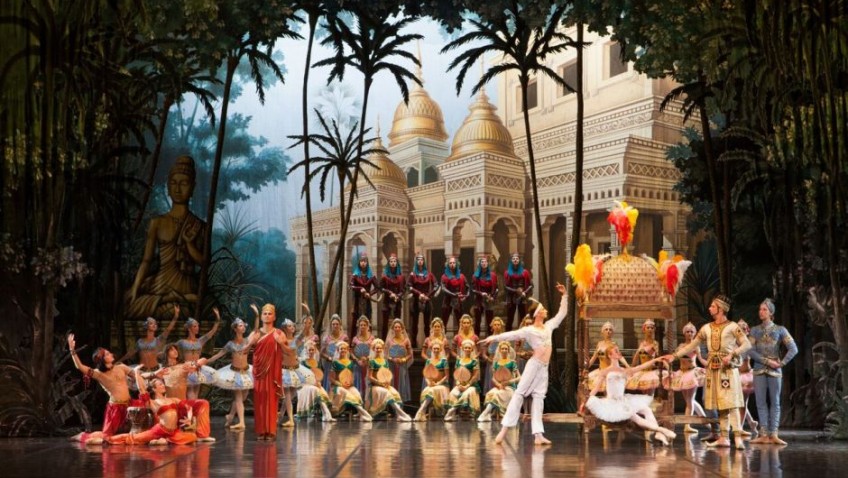 Marius Petipa’s faux oriental extravaganza, one of the great 19th century ballets, had its premiere in St Petersburg in 1877, the year Queen Victoria was proclaimed Empress of India.

The two women have a melodramatic face-to-face confrontation; Ludwig Minkus’s music suggests they are going to start pulling out each other’s hair.

The story, which has its roots in a drama by Kalidasa, a 5th century Indian dramatist and epic poet, is an excuse for old-fashioned melodrama, exaggerated mime, lavish scenery, exotic dances and classical dancing.

The first two acts concentrate on the spectacle, the big processions and the mime; so much so that you wonder when the dancing is going to begin.

The audience has come for the pyrotechnics and Kolesnikov and Rodkin do not disappoint. They concentrate on technique and there is no characterization. Andre Federkovia is a striking Bronze Idol.

The celebrated Kingdom of the Shades act – a vision in Solor’s opium-ridden mind – has long been recognised as Petipa’s masterpiece. 24 members of the corps came slowly down a ramp, one by one, making an unforgettable entrance; the repeated arabesque could, seemingly, go on forever.

La Bayadere could do with a more dramatic climax. The St Petersburg Ballet Theatre’s staging does not include the apocalyptic epilogue in which the temple comes crashing down, killing everybody. It may be kitsch but as a finale it’s second only to Samson and the Temple of Dagon.