Home / LIFESTYLE / REVIEWS > / FILM REVIEWS / This British debut thriller has a lot going for it, but loses its way. 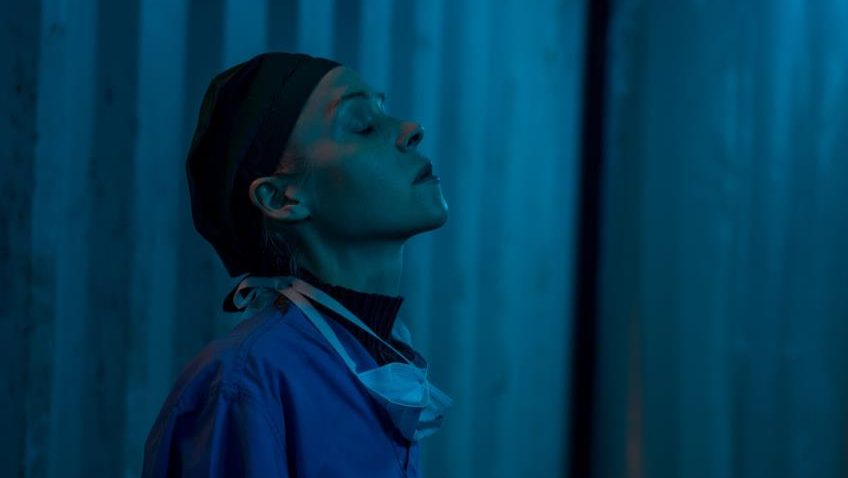 This British debut thriller has a lot going for it, but loses its way.

With a great title, an alluring premise, a gritty Belfast setting and a strong lead performance from Antonia Campbell-Hughes (Kelly & Victor) as a prominent anaesthetist-turned-black-market-doctor, Colum Eastwood’s debut feature, Black Medicine, has a lot going for it.

In his director’s statement Eastwood says he wanted a ‘Michael Mann vibe’ to his thriller, and cited Thief, Mann’s own debut feature of 1981. A more apt influence might have been Stephen Frears’ 2002 thriller about black medicine, Dirty Pretty Things, which was nominated for an Academy Award for its screenplay. For it is Eastwood’s cheesy screenplay and underdeveloped characters that let down the film, not the constraints of the low budget or even the uneven acting.

After the death of her young daughter for which Jo (Campbell-Hughes) feels responsible, she gave up on life: losing her licence to practise medicine and separating from her husband, Richard (Keith McErlean). When we meet Jo, a very attractive woman in her mid-to-late thirties, who looks even younger, she has found a new job. And, judging from her swanky digs, it pays a lot better than the NHS, or normal private practice. By comparison, Richard, who is supportive and still devoted to Jo, seems to live in a small boat moored in the port which he apparently uses for his livelihood.

But Jo’s job, while utilising the skills she spent her life honing, is a sort of self-punishment for her misplaced guilt. Relying on her sleazy handler Stevie (Lalor Roddy) with his underworld connections, Jo is in demand for her skills and discretion in removing slugs from wounded criminals, performing abortions and a host of illicit medical activity that criminals wish to keep off the books and out of hospitals.

In these procedures Jo can somewhat justify her actions: she is saving lives and operating under the Hippocratic Oath. the Oath’s two main tenets are medical confidentiality and non-maleficence.

But when Bernadette (Orla Brady), a wealthy Irish matriarch, summons Jo to her heavily guarded mansion to save her dying daughter, Lucy (Julie Lamberton) Jo is uneasy. Lucy has a heart condition, and her days are numbered. The official waiting list for heart transplants is too slow. Eastwood is not interested in making an issue-based film about the need for organ transplants as did French filmmaker Katell Quillévéré in her astonishing 2017 dramatic feature, Heal the Living, but in making a women-in-jeopardy thriller where the woman with the failing heart is not one of the two in jeopardy.

Although Jo will be “well compensated”, it is one ethical compromise too far. Not even Bernadette’s distraught, if calculated, appeal to Jo’s maternal instinct is enough to persuade her. For Bernadette has a sinister heart transplant doctor named Dr Kilvenny (Shashi Rami) on retainer to keep Lucy alive. And the suitable “donor” he has lined up, Aine (Amybeth McNulty), is not dying in some registered hospital, but alive and well and hiding in the back seat of Jo’s car.

Here’s where the plot thickens. Again, the film does not purport to be an issue-based thriller about the international black market in organ transplants that was Dirty Pretty Things (the former doctor in that film is a west African illegal immigrant working in a hotel), but an illicit organ transplant drives the plot.

To say any more would be a spoiler, but you get the drift. And while there are holes in the plot, and in particular, with the women’s escape options, there’s a more frustrating problem. Eastwood misses the chance to concoct a thought-provoking little moral dilemma like the excellent thriller 99 Homes, by turning his characters into gothic stereotypes.

By ensuring there is no ambiguity in the donor’s health or willingness to donate, Eastwood has turned both Bernadette and Dr Kilvenny into sadistic murderers. Bernadette is a Rosemary West prowling around her Gothic mansion and Kilvenny is Dr Frankenstein or Josef Mengele. Yet for all his expertise and suspicion of Jo, Kilvenny fails to foresee the ploy that she plans to use to defeat him. It becomes a bit silly, when far from just a grieving, wealthy woman, Bernadette seems the boss of some mafia cartel and the silencing of witnesses turns to Richard, whose hitman is not fit for purpose.

You can read our review of Heal the Living here.

You can read our review of 99 Homes here.