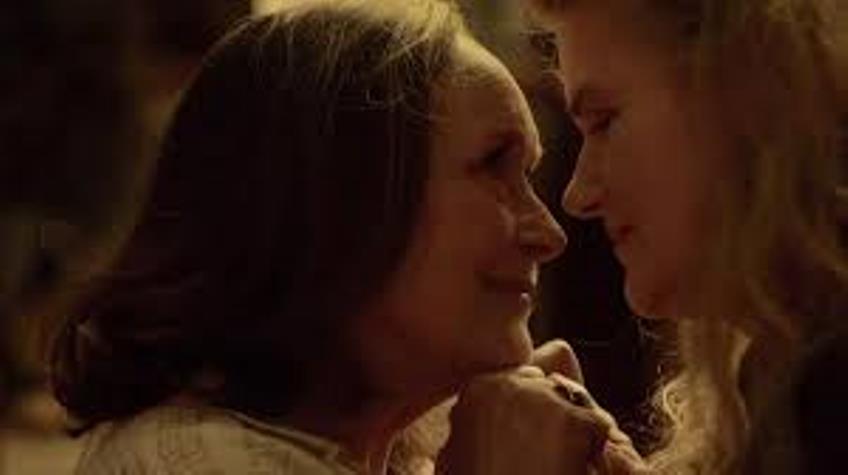 Filippo Meneghetti’s debut feature film is one of the most refreshing older-age love stories in years, and the best same-sex love story on our screens since last year’s acclaimed Portrait of Young Lady on Fire. Two of Us is more in the vein of the 2018 Paraguayan The Heiresses, than Tod Haynes’ Carol, but better than both because the characters are more likeable, and the film is a lot more fun.

At its core is a passionate, but forbidden relationship that is cleverly reflected in the configuration of the two women’s flats, separated by a hallway and a lift. What is surprising is that the director of this impeccably cast, sensitively directed and intelligently co-written (with Malysone Bovorasmy and Florence Vignon) French film is a young man.

Septuagenarians Nina Dorn (Barbara Sukowa) and Madeleine “Mado” Girard (Martine Chevallier) are childhood friends and lovers separated by life and the choices they made under the influence of societal mores. Madeleine married and raised a family and Nina, who is more open about her sexual identity, travelled the world as a tour guide.

Now they are reunited as neighbours in an apartment block in a drab provincial French town. They live together, but between the two flats, careful to maintain separate residences.

Madeleine, now a widow and taken-for-granted grandmother, is blamed by her priggish son (Jérôme Varanfrain) for their father’s early death. He suggests that her indifference hastened his demise, while we reflect on what Madeleine sacrificed to make the marriage work at all.

Madeleine’s hairdresser daughter Anne (Léa Drucker), who is a divorced, single mother, blames her mother for not standing up to her brother’s accusations. Closer to her mother and more sympathetic, Anne is nonetheless unprepared to face the truth of who her mother really is, and Madeleine is still wary of dropping any hints.

This will have to change, and Mado, under pressure from Nina to emerge from the closet, knows it. For they are plotting their escape to sunny Rome where the women dream of the day when “we can be who we want”. Rome is the eternal city, and the pair have, in the autumn of their lives, turned it into their promised land. An estate agent is appraising Mado’s well-appointed flat and the two have been saving for the day when, with their pensions and the sale of the two flats freedom is theirs.

Mado chooses a birthday party (the clock is ticking) dinner with her family to make the announcement. Meneghetti lets us sweat it out along with Mado, who is waiting for her moment – as are we. We watch in agony as the moment comes and goes.

When Madeline cannot bring herself to break the news to her family, Nina storms off. Madeline is devastated at losing her chance of happiness, but before she can make amends, tragedy strikes – one that risks separating the two women forever.

Rest assured, there is not a drop of sentimentality or mawkishness in the beguiling script, as the writers spin a web of intrigue around the pair’s plans. Ingeniously, Meneghetti shoots the film like a thriller. There is something of Rear Window in the way Nina, peeping through her door to see if the coast is clear, darts across to Madeline’s flat under cover of night, dodging the creepy Muriel (Muriel Bénazéraf). There is the rebellion and dark humour of One Flew Over the Cuckoo’s Nest, too, in Nina’s desperate, undignified attempts to get Muriel sacked and then there is Madeleine’s cunning complicity in the rescue plan, which turns tragedy to comedy.

In American Canadian director Thom Fitzgerald’s 2011 film Cloudburst, Olympia Dukakis as Dot and Brenda Fricker as Stella escape on a Thelma and Louise-type journey to get married when Dot’s daughter moves her into a nursing home. The difference between the two films is night and day, however and if, for all its feel-good bravura, the broad humoured, high concept Cloudburst lags, Two of Us keeps getting better and better.

And one reason is that there are four great, multi-dimensional characters and four delectable female performances in this immersive story of atypical star-crossed lovers.

There is also cat-and-mouse suspense and a bit of blackmail in Nina’s devious attempts to gain access to her friend, whose flat has never seemed so separate. The suspense heightens when Anne, growing suspicious of good-neighbour Nina, turns detective, only to be repelled, then fascinated and finally, liberated from her own constricted life, by her discovery.