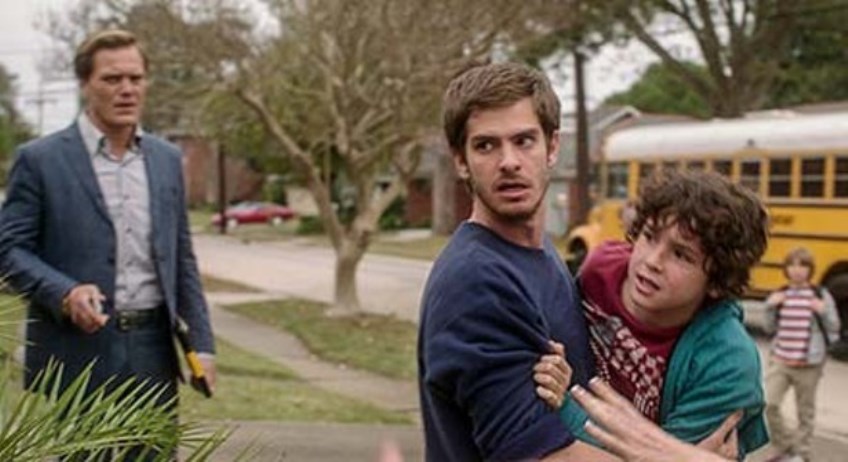 99 Homes is a gripping, topical thriller with electrifying performances from Andrew Garfield (The Social Network, The Amazing Spider-Man, Never Let Me Go) and Michael Shannon (The Iceman, Revolutionary Road). Co-writer-director Ramin Bahrani’s films (Chop Shop, Man Pushcart) have featured original, three-dimensional characters who are the “little people” struggling against the odds to make a living in the bustling, unkind streets of New York. Fans of Bahrani will be surprised at the change of style, budget, cast and setting in 99 Homes, while recognising his strong sense of character, compassion and social injustice.

Dennis Nash (Garfield) is a hard-working, skilled and street-smart construction worker in his early thirties who lives in a mortgaged suburban bungalow with his son Connor (Noah Lomax) and mother (Laura Dern). When the Florida housing bubble bursts (as it did in 2008), he is suddenly laid off without a final payment.

Despite frantic efforts to hold off the bank, the family is evicted in an emotionally fraught visit from Rick Carver (Shannon) the ruthless, cold-hearted agent appointed by the bank. When the two men meet again, Carver is struck by Nash’s willingness to work, his range of skills and, most of all, by his desperation. Carver knows that Nash needs work and offers him just that.

“Don’t get emotional about real estate”, Carver warns Nash as he teaches him the ins and outs of the booming foreclosure business. But Nash is emotional about his home, and has promised his son, who misses his friends and school, that they will return to it. When Carver offers Nash a way to reclaim his home, or rather, to earn enough money to purchase a much better one, the unemployed builder has no choice but to accept.

While this is clearly a Faustian pact and Carver is Florida’s equivalent to the film Wall Street’s Gordon Gekko, nothing about Bahrani’s film feels rehashed or predictable. You will be on the edge of your seat throughout the film.

While Nash is uncomfortable with Carver’s business practices, which include scamming the government and playing hard ball with desperate families, he is seduced by the large sums of money he is making and encouraged by Carver’s approbation. Nash is not only becoming Carver’s right-hand-man, but he is taking the lead in negotiations that would eliminate Carver’s competition from his patch. Although we, too, are swept along by Nash’s success, Bahrani never allows the audience to lose sight of the trade-offs.

In a scene at Carver’s sprawling, ostentatious waterfront property, Bahrani gives us a glimpse of the human being inside the pitiless swindler. Carver confesses to Nash that just a few years before the market crash, he was an estate agent, helping people to buy the very homes from which he is now evicting them. Since there were suddenly no buyers or homes for sale, he supported his family by buying them back for the banks. We never sympathise with Carver, but we understand that he is as much a product of the unregulated and unethical investment banks and of the blinkered and naive Government’s disastrous policies as are the victims.

Just as we begin to wonder if Nash will lose his moral compass, Bahrani throws a spanner in the works in the form of a rebellious homeowner who refuses to take the path of least resistance.

With what has to be the most suspenseful and cathartic climaxes in any movie so far this year, 99 Homes is that rare film that actually leaves you wondering about the future of the three main characters, as if you really knew them.