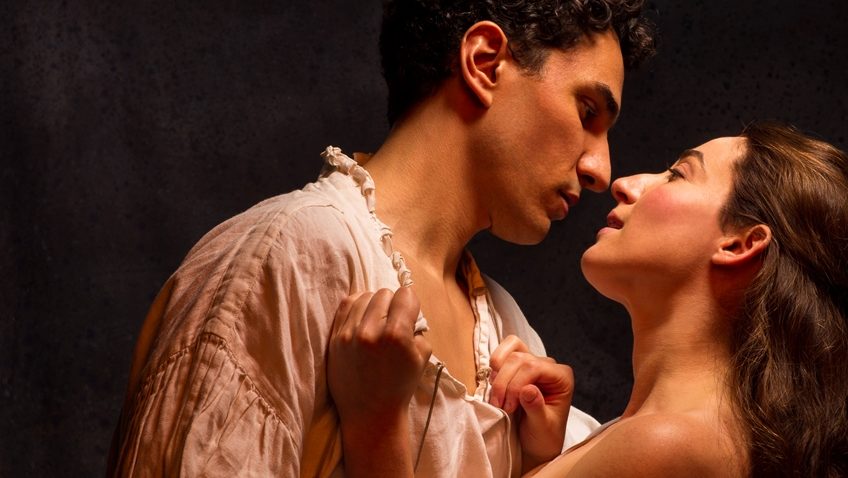 ROMEO AND JULIET, the most popular love story in the world, has inspired so many plays, novels, poems, operas, musicals, symphonies, paintings, sculptures and films.

I had the opportunity to see Shakespeare’s play and a ballet version on the same day (with a decent interval, for refreshment) and took it. I can confidently recommend both productions, and even more so if you have never seen the play and never seen a ballet version.

Scott Wentworth’s production, which was seen at Festival Theatre, Stratford, Ontario, Canada in 2017, is first-rate. The story-line is crystal clear and boldly spoken. The play gets off to a good start with an exciting brawl. The production has pace and the transitions from scene to scene are seamless.

Sara Farb‘s Juliet comes across as a serious, sensible sixth former, who thinks things through before she acts. She can be childishly girly, especially when she is exasperated with the Nurse. But she is not cowed by an angry father bullying her into a marriage she does not want. She is far more mature than Romeo, who, when disaster strikes, just lies down on the floor and blubs and weeps.

Antoine Yared, who plays Romeo, has a good rapport with Farb throughout and together they find a lot of humour in the balcony scene.

Scott Wentworth is not afraid to embrace the melodrama when Juliet is found dead on her wedding day. He gives the scene the full hysterical treatment. In the final scene in the tomb he surrounds Romeo with the ghosts of characters who have been killed earlier in the play.

Evan Buliung’s Mercutio is no poet. He’s a vulgar, hail-fellow-well-met, scurvy wild goose, who loves his own voice and rarely stops acting the fool. Buliung is exhausting.

Wayne Best is a schoolmasterly Friar Laurence and Seana McKenna’s Nurse is one of the best Nurses I have seen.

Wentworth does not allow the audience to forget that the lovers are star-crossed. Four silent widows, dressed in deepest mourning, regularly appear at key moments. One of the widows acts as the Chorus.

The apothecary, who wears a mask with a beak and is covered completely in a dark cloak, doesn’t look human at all and clearly is a Death-figure

P.S. You may remember Montague promised to raise a statue to the lovers. It’s a great pity that he didn’t ask Michelangelo, who would have done the job properly. The statue in Verona, surprisingly, just has Juliet standing all alone.

Kenneth MacMillan’s version of Romeo and Juliet for the Royal Ballet premiered at the Royal Opera House in 1965. The combination of Sergey Prokofiev’s music, MacMillan’s choreography and the dancing and the mime of Rudolf Nureyev and Margot Fonteyn made it an instant hit and it has been the corner of its repertoire ever since.

Nichols Georgiadis’s rich costumes for the ball and the formality of the dance in both steps and carriage have a memorable and noble hauteur.

Watching the ballet, as I did, immediately after watching the play I was even more aware how well MacMillan knew Shakespeare’s text and how true he was to it.

Yasmine Naghdi and Matthew Ball are a convincing pair of lovers. The rapport between them is very visible. This performance you can now see on line was filmed in 2019.

In the opening scene Juliet is a shy child with a doll and still has a nanny to look after her. She coyly backs away and hides behind mummy when Paris calls.

In the balcony scene she is lyrical, so gentle, and so trusting. Whilst in the farewell after the consummation of the marriage she is so sad.

And then suddenly her father is telling her she has to marry Paris (she is already secretly married to Romeo) and it is a tremendous shock. Sitting on the edge of her bed, Naghdi looks as frightened as the girl in Edvard Munch’s painting, Puberty.

There is so much fun, so much camaraderie between the lads and with the girls and the tarts until Tybalt comes on and spoils everything, though it is Mercutio who goads him into drawing his sword.

Gary Avis’s Mercutio is a cheeky, very boyish lad. Valentino Zucchetti’s Tybalt is noticeably older and much more mature. He is also very protective of Juliet at the ball and is as shocked as everybody else is when he discovers he has killed Mercutio.

The second act curtain tableau with the dead Tybalt, the distraught Romeo and the wailing Lady Capulet is theatre as it used to be in the good old days.

There is no hysteria when Juliet is found dead on the wedding day, which is underplayed. MacMillan saves the melodrama for the play’s final moments when Romeo is frantically trying to bring Juliet back to life by recreating the choreography which brought them together; but her body keeps collapsing in his arms.

It is heart-breaking to watch Matthew Ball and when Juliet wakes to find Romeo dead, the poignancy is even greater. Naghidi’s grief is overwhelming.