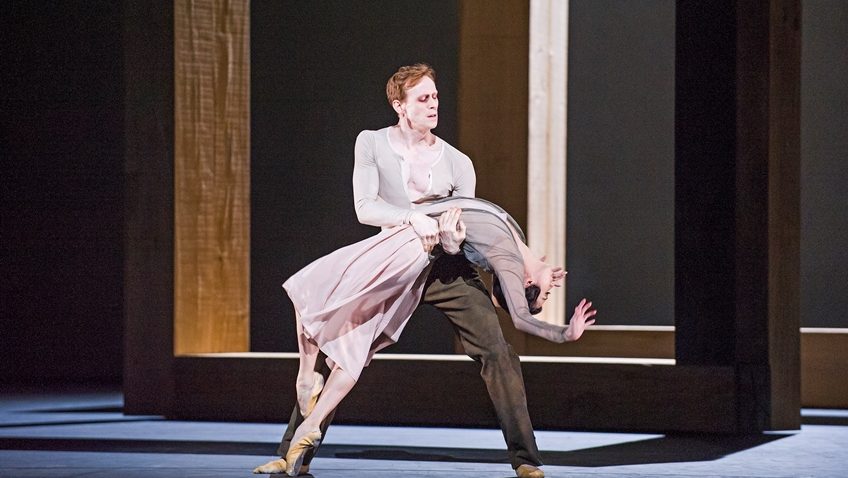 Many others have attempted to stage and film her works and failed.

McGregor’s three one-act ballets inspired by her novels, Mrs Dalloway, Orlando and The Waves, premiered at the Royal Opera House in 2015 and were highly lauded, winning Critics Circle and Olivier Awards

The present production dates from 2017. Wayne McGregor’s abstract, impressionistic choreography, to music by Max Richter, is perfect for Virginia Woolf’s stream of consciousness

Virginia Woolf’s Mrs Dalloway, published in 1925. Describes a day in the life of a middle-class woman planning a party and is a criticism of the life of the British ruling class.

The characters are seen from various angles, as they see themselves, as other sees them and as Woolf sees them.

She ignores the sequence of time, external and internal. The mind is full of fragmentary memories. There was an attempt to film it with Vanessa Redgrave.

Soon (with Gary Avis, Beatrix Stix-Brunell and Federico Bonelli) there is a quartet of younger and older selves, weaving in and out of each other; closely knit together, yet apart.

The tender relationships from a lost Edwardian world, playful, beautiful, bring back nostalgic memories which are filtered and relived.

There is terrible pain, too. A church bell tolls for the dead. A shell-shocked victim of the Great War commits suicide. Edward Watson’s highly emotive performance is achingly sad; his body and mind all distorted.

Virginia Woolf’s Orlando, a flamboyant romp published in 1928, is about the treatment of women in English history. Orlando, an Elizabethan, has a change of sex at 30 and travels the world across the centuries to 1928, the year the novel was published.

Sally Potter made a film in 1993 with Tilda Swinton as Orlando and Quentin Crisp as Elizabeth I. There have been other films, too, with Miranda Richardson and Isabelle Huppert.

The men are in doublet and hose and ruffs. A Bedlam inmate is uncertain of his sex. A woman wears a transparent farthingale. The men were black tutus round their waist. The costume changes are a constant surprise. There are strange sounds. It’s windy and ghostly; and nobody’s smiling.

I am totally at a loss as to what is going on. More and more dancers come onstage. The music gets more and more urgent. Lucy Carter’s lighting is brilliant.

Published in 1931, Virginia Woolf did not call Waves, her most experimental work, a novel. She called it a playpoem.

A series of monologues trace the inner lives of six childhood friends through adulthood and on to middle age and death, their multiple consciousnesses weaving together.

Virginia Woolf had no illusions about her playpoem. “Few people will survive the first 100 pages,” she told her lover, Edyth Smyth.

Katie Mitchell attempted to stage it at the National Theatre in 2006.

On to the back wall is projected a huge photograph of a sea shore and crashing waves. The ballet opens with a reading of her farewell suicide love letter to Vita Sackville-West.

McGregor’s choreography is back in the human world and the intense in-depth relationships are serious and involving.

Children run on, making a lot of noise, and play with a rope. The music gets louder and more dramatic, only to stop abruptly. The cast move back and forth in the darkness. Virginia Woolf is dead.